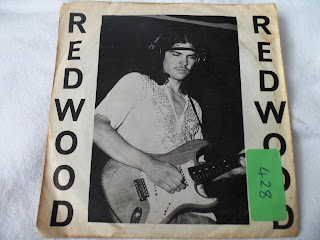 I guess every Heavy Metal listener who plunges into the fascinating world of really obscure bands and releases will learn the lesson eventually: locating an ultra-rare artifact doesn't mean that your efforts will be rewarded with good music after all. OK, many impossibly obscure records are actually in the same musical league of the most well-regarded bands in the business - sometimes even better, although not as frequently as many of us aficionados would like to admit. But let's face it, once and for all: in numerous occasions, the chase is far better than the catch. Most bands never got anywhere for a reason, you know.

Redwood is a recent discovery in the amazing realm of NWOBHM - and as soon as people knew that such a band actually existed, their sole and extremely rare 7'' became one of the most sought-after singles of the entire Metal Universe. Well, perhaps it's not as elusive as Hellfire Club or Holocaust (not that one), pretty much the as-rare-as-it-gets when it comes to NWOBHM, but it's surely a slice of vinyl that gives the major players in the collecting scene a few sleepless nights. It was supposedly pressed in a microscopic run (a hundred copies at the most optimistic), so it was a safe bet to assume most of us would never have the chance to listen to it. But luck was on our side when a eBay seller offered a copy for sale and was generous enough to rip both tracks in mp3 format, as a bonus for those who wanted to know what was it all about. You know, once it's in the internet, it's potentially eternal - and now not only the lucky (and wealthy) buyer can listen to this esoteric 7'', but also those who were quick enough to download the files before the links expired. 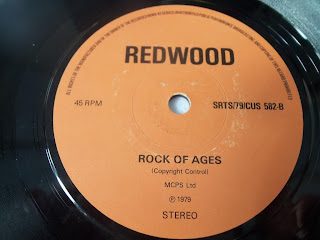 And no, I'm not implying that Redwood's sole (and stupendously rare) single is one to throw into the blast furnace at the earliest opportunity - but don't go for it expecting any sort of undiscovered classic of NWOBHM, as you will be heading for some disappointment. The sound quality is worsened by some difficulties in transferring, as the one responsible for the rip would be the first to admit - still, the production is very poor, and I'm afraid that even the first spin from a mint copy of the vinyl would not give you much return on your money when it comes to sound quality. And the two songs here included are far from memorable too - both "Give the Indian Back His Land" and "Rock of Ages" are unspectacular rockers with some guitar freakouts thrown in to liven things up, being not really atrocious but also very distant of anything too extraordinary.

The vocals are uninspiring and the lyrics are quite imature, but that's not exactly a rarity when it comes to NWOBHM, so I wouldn't care too much about it if the songs could live up to their promise - something I'm not really sure about, to put it in polite terms. OK, I'll concede that "Give the Indian Back His Land" presents a reasonably good intro and a verse-that-becomes-chorus scheme that can be reasonably acceptable if you're in the right frame of mind, but I seriously doubt that "Rock of Ages" will leave fond memories (or any memories, for that matter) in any listener, as it comes and goes without capturing any level of attention. 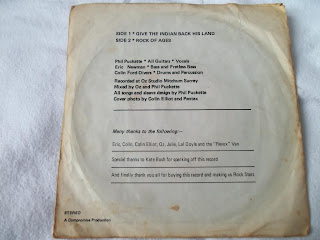 You don't need to be a genius to assume that Redwood was a very fleeting experience for those involved - and the statement at the sleeve "thank you all for buying this record and making us Rock Stars" sounds even more ironic now than it probably already was back in the day. I assume that Mr. Phil Puckette (V/G) was the leader of the pack (he wrote both songs and I suppose he wouldn't allow anyone to picture an unknown guitarist other than himself in the front cover, you know), and I wouldn't be remotely surprised if Redwood was over soon after the single was pressed, the mainman choosing to pursuit another career in the interim. Being released in the heady days of 1979, perhaps they could have stand a better chance if they managed to stick together a while longer, improving their playing and songwriting skills just in time to join the big NWOBHM explosion. It never happened, as we all know by now, but the mind wanders anyway. Whatever the story behind this release, I would surely love to know more - so, if you ever had any connection with Redwood, even the slightest, please disregard the fact that I didn't like the songs that much (I'm a human being and therefore can commit a few misjudgements, you know) and kindly get in touch ^^ 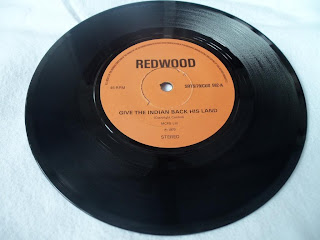 Many thanks to NWOBHM Knightmare for sound files

Have you been involved with any of the bands mentioned here? Have any extra info and/or corrections? Please e-mail me at drequon@gmail.com and let me know!
Postado por Drequon às 07:35