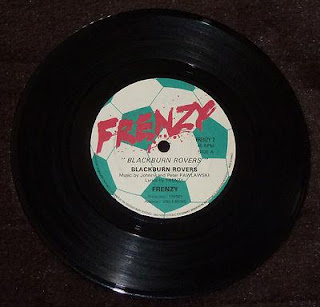 When it comes to releasing independent singles, this English version of Frenzy (from Lancashire) surely felt like they had no time to waste. Born out of the ashes of the not-really-Metal-but-still-quite-interesting group called Anniversary (hope to drop a few lines about them in the not-too-distant future), Frenzy was the second attempt of brothers Johnny (G) and  Peter Pawlowski (B) of finding fame and fortune in the cut-throat music business. Wanting to waste as little time as possible, the duo quickly assembled something of a stable line-up and jumped straight into the studio, where they seemingly laid down enough tracks for not only one, but actually three 7'' singles, all released as self-financed efforts at different periods of 1981. Not an usual approach for NWOBHM hopefuls, that's for sure, but we can say it was mildly successful, as two of the three pieces of vinyl ("This is the Last Time", the first to come out, and "Without You", the last one) sold in respectable quantities and are now well-regarded collectables that any of us will be able to locate at a reasonable price. The other one ("Blackburn Rovers", that is) is not in the same league though, and I guess that most of you good people can easily survive without a copy.

If you're looking for easy-to-understand comparisions with more well-known bands from the period in question, perhaps I could stick my head out and whisper Black Rose, as both groups had a similar ear for melody and a resourcefulness to mix some reasonably heavy riffing with memorable, catchy vocal lines. Still, I would say that Frenzy is a tad less metallic and a bit more into good old rock and roll, so it's not like you will find any "Knocked Out" or "Sucker for Your Love" in here, you know. As all three singles from Frenzy were released roughly at the same time, I guess you will forgive me for reviewing it in a single post, right? 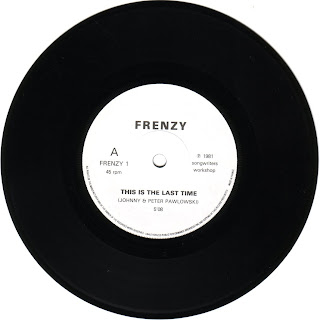 Being released sometime in the very early months of 1981, "This is the Last Time" begins with a somewhat weird (and pointless) intro with guitar effects, but soon launches into an interesting and reasonably intense number with strong guitar work (some nice interplay indeed) and a nice, multilayered chorus. It's not skull-crushingly heavy, but it's a very upbeat composition and many of you good people will surely get a few healthy headbanging sessions out of it. Flipside "Gypsy Dancer" is a more commercially-inclined song, with that kind of 'replying' backing vocals that screams "chart-friendly" right in your face.  It doesn't work quite as well as the previous track, but there's nothing too objectionable going on here too - actually, it's a pleasant enough song that you can hear from start to finish without any real grimaces along the way (if you can fully ignore the immensely immature lyrics, that is).

The second instalment of the Frenzy series is a bit of an odd one, to be honest. "Blackburn Rovers" is a very basic rocker that pays tribute to the English football club Blackburn - one of those football-related songs that used to be (and perhaps still are) a whole niche of the market in the UK. Almost all of these recordings, though, may work reasonably well with fans of the club in question but will be virtually unbearable for anyone else on Earth. And "Blackburn Rovers" is no exception: despite Frenzy's best efforts to create a singalong effort with clapping hands, crowd noises and a let's-sing-our-lungs-out-together chorus, it just does not work. And things make even less sense when you consider that flipside "Up the Rovers" is nothing more than a rearranged "Blackburn Rovers" with pitifully few differences from the A side. I can't imagine many Blackburn fans fighting against each other to get hold of a copy of this 7'', and if wasn't for the NWOBHM collecting scene, the few remaining copies of this single would almost surely be condemned to gather dust in bargain bins for the time being. Nothing to keep you awake at night if you don't have it in your collection, believe me. 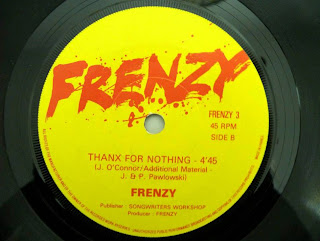 The last single to be released by Frenzy, "Without You" came out not long after the previous two and goes pretty much in the same vein of the aforementioned "This is the Last Time" single - although slightly more poppy, if truth be told. Nothing to be worried about, though - it's a good mix of energy and accessible melodies, a good enough song to stomp your feet and sing along with the catchy (albeit slightly hackneyed) chorus. Not much changes with "Thanx For Nothing", but it's fair to say that it's a tad more intense, with prominent riffing and a interesting groove thoroughout. I actually like it better than the A side, and the simple-yet-dynamic arrangements can't be faulted at all.

Frenzy didn't really last the distance, though - maybe the three self-financed releases in a row were too much for their finances, or else the response from HM fans (albeit quite positive) and record labels just wasn't enough to encourage any further efforts from the band. There's not much info on stage activities from Frenzy back in the day too, so perhaps it was more of a studio venture waiting for a encouraging feedback to become serious - something that never happened, unfortunately. Efforts are being made to locate those involved with Frenzy and as soon as some enlightening info come out of this, I'm sure to let you good people know! 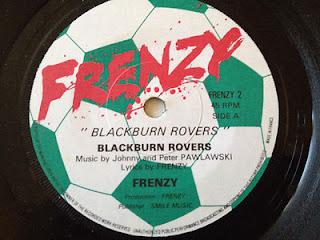 Have you been involved with any of the bands mentioned here? Have any extra info and/or corrections? Please e-mail me at drequon@gmail.com and let me know!
Postado por Drequon às 08:19