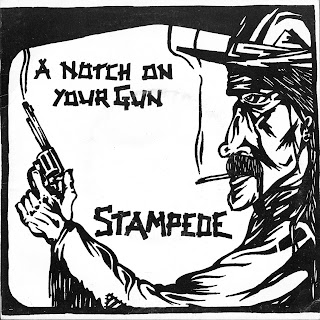 The seemingly never-ending search on obscure heavy music from a bygone age is often rewarding, although sometimes it gets quite frustrating, you know. When it comes to Stampede's "A Notch on Your Gun" EP from 1980, though, the feeling is kinda mixed - it's not like I was expecting anything out of the ordinary here (and it's surely not a case of a positive surprise in any sense), but I must admit the contents surprised me a little in this particular case. Although every detail in this 7'' transpires the amauterish spirit of the whole venture, there seems to have been some sort of intentionality in it - like they were not just throwing things together, like they actually had a plan, but were just too young and/or unexperienced to put it effectively into practice. I reckon they were only on the periphery of the NWOBHM genre, but still it's worth to drop a few lines about their music for history's sake.

There's not much info around on this particular Stampede (I guess you already know at this point that I'm not refering to the resonably well-known Stampede of "Hurricane Town" and "Official Bootleg"), seemingly based somewhere in the West Midlands (UK) and formed by musicians that, as far as we know, never took part in any other bands of note in later years - and you can rest assured that axeman Chris Barnes never resurfaced as a Death Metal singer in USA! Released by Punchbowl Records (whoever they were), this EP shows the four-piece to be a very unexperienced bunch of musicians, and the kinda ramshackle nature of the three songs featured are more than representative of their lack of songwriting skills. Still, it seems they were actually trying to create a solid Wild West imagery for their band - not only with the (undeniably ugly and poorly-done) artwork, but also on the lyrical contents and even in the music itself, that (at least to my humble and charitable ears) sometimes show more than a glimpse of country music. Am I completely insane? Well, I don't know. 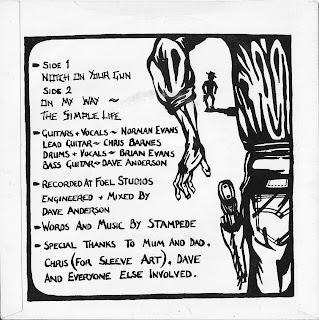 The almost-title-track "Notch On Your Gun" is an attempt to recreate the feeling of a gun-toting Western duel into music, with extremely simple vocal lines and lyrics that doesn't make much sense at all. It's an extremely simple song with an undeniable pub rock feel to it, but still it drags on for quite a while, with a nonsensical instrumental mid-section that threatens to completely fall apart at any moment. Not the most exciting song ever recorded, I'm afraid. To be fair, things improve slightly on the flipside, with both "On My Way" and "The Simple Life" being more accomplished songs than its very poor predecessor. Not that this is a major achievement, mind you, as "On My Way" is a slightly folky, semi-acoustic soft rocker that will almost surely leave no lasting impression on any listener. "The Simple Life", to its credit, is the best song of the whole EP, with a (slightly) heavier riff and a song structure that immediately reminded me (and I fully agree with Malc McMillan's "NWOBHM Encyclopedia" in it) of Panza Division's "The Day Delta 4 Played Mars". Nothing to set the world ablaze, that's for sure, but it at least gives Stampede a modicum of musical revelance. They didn't really suceeded in creating something of a personality, but at least they tried, you know.

No other releases of any kind are known from this particular band, and I wouldn't be surprised if they never went as far as this only recording session, perhaps never even making out of the rehearsing room for any gigs at all. They also seem to have been very young at the time (the "thanks to mum and dad" note on the sleeve is hard to ignore, you know) and I imagine that the whole band was centered around the Evans brothers, Stampede as a whole being disbanded as soon as the lads decided to devote themselves to school and/or get a proper job. Still, this little vinyl curiosity survived the years, becoming a collectable for obsessive NWOBHM completists - something that I guess would come as a shock for the band members, could they be located. Most headbangers will find little joy on "A Notch On Your Gun", to be point-blank honest here - but I'm a good-hearted person and I like to thing that the handful of surviving copies will all find nice NWOBHM collections to call home. 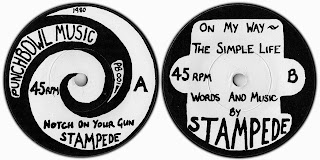 Many thanks to NWOBHM Knightmare for sound files and scans!

Have you been involved with any of the bands mentioned here? Have any extra info and/or corrections? Please e-mail me at drequon@gmail.com and let me know!
Postado por Drequon às 14:12