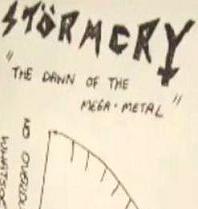 Sometimes, I'm rendered speechless. OK, it's heartwarming to know how intense and inspiring the NWOBHM days were to many people, but it doesn't mean to say that every recording band of those days were worthy of more that they actually managed to get - sometimes, not even that. Take Störmcry, for example. Three kids from Lewes, East Sussex UK pretending to be Venom, that actually went far enough to record a couple of songs on one of their bedrooms (rebaptized as "Hellhole Studios" for great effect) and to design a hand-drawn artwork for their cassete-only "The Dawn of the Mega-Metal" single. "No overdubs whatsoever!!" and "No Bunny Rabbits!", warn us the front cover - not that anyone could have any doubt about that, you know. It even seems to me that they were trying to create a new subgenre, the Mega Metal - something that make sense when you think that Venom had Black Metal to call their own. Wonders never cease.

I mean, it's not only that it is a stupendously bad release - it's hard to even take it as a release at all. "Stormcry" and "The Charge (Synth Wimpi Massacre)" were probably written at the same date of recording, being so crude and amateurish as you could expect from 15-year old kids (one of them had only 13) making some noise for the sheer hell of it. There's no production, no proficiency, they don't know what to do with their instruments - the recording is actually so poor that you can hardly understand what they meant to do, but still it's noticeable that whatever it is, they weren't doing it right. "The group hope to record a cassette album when finances allow", say the small letter sent along with the release, "and to play some local gigs at the same time". I'm almost entirely sure they didn't do either thing, and I reckon it was all for the best in that case. Furthermore, I'm pretty sure that any of the musicians have no involvement whatsoever with the music scene today - and would be bewildered, if not utterly shocked, to learn that people are actually willing to buy copies of their youthfully irresponsible release, considering it to be a NWOBHM collectable of some sort. 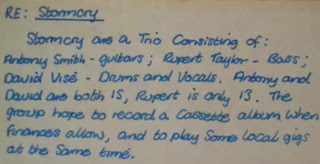 Still, it is not a bad release in a offensive or intolerable way - and that's why I won't give it a black dot, something that would be mandatory if I were judging this cassette on musical merits alone. It became something of an underground legend not only for being really really bad, but also from being funny enough to put a smile on people's faces. It's not like we are laughing at them - it's more like we're laughing WITH THEM, having some prepubescent fun with a bunch of kids that really like Venom and wanted to spend a sunny afternoon pretending they're in a band. I guess it didn't last much more than a few weeks, at the very latest - but now, thanks to good old Lady Luck and a bit of internet sharing, it will last forever. It's almost uplifting, in a way - like a child's dream come true. I hate it, but I really love it. Thank you, guys. 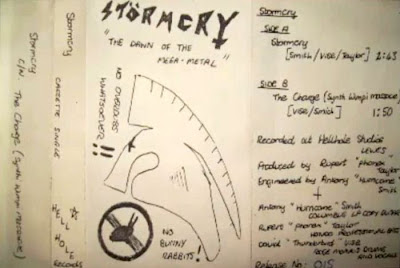