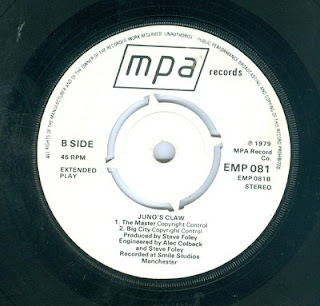 OK, I know that we all love obscurities, and it's always nice to have the chance to listen to some unknown music from nearly-forgotten bands of the past. But It's my opinion that many people tend to overreact when confronted with some of this ultra rare collectables, overlooking their weaknesses and applying the "undiscovered masterpiece" tag to groups that, to be honest, are nothing of the sort. As you may all have guessed by now, that's exactly what I think of Juno's Claw and their sole 7" from 1979. Three songs that received some good praise on "NWOBHM Encyclopedia" and are hailed by many as part of a pre-NWOBHM monster - and I'm sorry, but I completely fail to see why.

"Barbara" is the A-side and, to be honest, is the weakest of the pack. Not that it is a complete disaster, admitedly, but the song has a rudimentary construction (which evolves around a boogie-like and not really interesting riff) and a truly annoying chorus, repeating "barbara, barbara, barbara" until you just can't take anymore. Not a good piece of music, sorry. Things get more interesting on the flipside, though, as "The Master" and "Big City" are definitely better songs. "The Master" has a good riffing and a heavy, epic feeling with a pretty technical display of musicianship, being the most interesting number by far."Big City", on the other hand, is a more restrained piece of music with some good ideas, even though the song as a whole seem to be getting nowhere at all - and then, it actually ends. 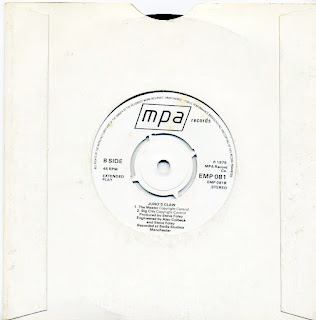 Believe me, I get no pleasure at all in saying that this record is not what I would expect from it. In the end, is not that Juno's Claw's sole single should be incinerated or anything like that, but it's just too damn clear why these hopefuls never got anywhere with their music. It's not bad - it's just that it's not that good either. I wouldn't say you should stay away from it, though - give it a listen and maybe you will like it more than I did. It has at least one perfectly good piece of music ("The Master") and it's enough to justify your efforts. But I must be honest and say that, in my humble opinion, this 7" does not fit to the "undiscovered NWOBHM masterpiece" file at any sense - it's more on the "one good song and that's it" category, I suppose.

UPDATE (november 07th, 2013): after long search, and with the invaluable help from a person who actually knew some of the guys (thanks a million, buddy), I'm happy to confirm some concrete info on Juno's Claw. The band was from Lancaster (UK) and most (if not all) of their outings happened in that geographical area. The line-up who recorded the single is now listed below. Unfortunately, Juno's Claw folded in 1980 or early 1981, when guitarist Ian Beck left due to family and work commitments. John Garner and Martin Nelson later joined Stigma, a project who never laid down any vinyl of their own, but had an important role in the development of Frenzy (I hope to clear all this up in due course). Drummer John Bibby apparently is no longer alive, so may God rest his soul. Still trying to locate some of the original musicians (and I hope they can forgive my lack of taste when it comes to their music, as it's nothing personal really!), so maybe we will have even more enlightening info in the near future. Fingers crossed!

Thanks to Strappado Metal Blog for scans and downloading link!Have you been involved with any of the bands mentioned here? Have any extra info and/or corrections? Please e-mail me at drequon@gmail.com and let me know!
Postado por Drequon às 20:13