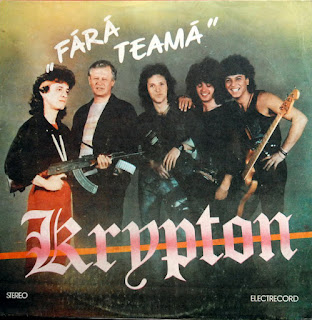 After an acceptable enough debut with "30 Minute", Krypton (this time spelled with the 'Y' that would become ever-present from now on) had to endure a lot of internal turbulence, resulting in an almost complete reshuffling of the band. The most drastic absence would undoubtely be Eugen Mihăescu (G), band leader and songwriter, that moved to Germany to study Music at the University of Köln - and to make a lucky escape from Romania's Dictatorship, of course. Surprisingly, Krypton managed to survive this massive loss, with bassist Dragos Docan assuming the reins and nearly reinventing the band as a whole. The group decided to adopt especially designed stage clothes (something unique in Romania at the time) and to play a different kind of music, more attuned with the heavier stuff played at the other side of the Iron Curtain. From all this, came "Făra Teamă" - not only my favorite album from all Romanian Metal, but also one of the most important LPs ever released in that country.

It was a time of changes in Romania, and "Făra Teamă" was totally engulfed by the essence of those days. Written a short while before the destitution of dictator Nicolae Ceausescu, the lyrics were to be submitted to censorship's approval - something that never happened, fortunately, as revolution took the streets right on time. The recording sessions began shortly after the end of the communist regime, and the firegun held by drummer Razvan Lupu at the front cover was lent by one of the soldiers who were guarding the streets at those troubled days.

"Făra Teamă" was the first rock album released in Romania after Ceausescu was gone, an impressive enough feat to secure a very special place in Romania's history. But Krypton's second LP deserves a listen not just because its historic background. Actually, it is a goddamn bloody good album - something that the weak production and not-remotely-interesting artwork may try to hide, but for no use, fortunately. The opening song, "Nemuritori", tell no lies about what's to come, building upon a simple yet creative song structure to deliver a extremely listenable slice of hard / heavy music with a memorable chorus. Really impressive. The following songs are more or less the same thing (thank God), adding some subtle classical influences to make things even more interesting. In fact, songs like "Sint Doar un Nor" e "Capriciu 4" are not that distant from what Helloween would do with Andi Deris in later years - surely with not the same level of musicianship or confidence, but still reaching very respectable results.

The band sounds really tight. Even though his bass was mixed a bit too high, Dragos Docan shows how good a musician and songwriter he was, writing nearly all the songs on his own. Razvan Lupu is a strong drummer, and Manuel Savu and Valentin Stoian deliver competent and creative performances as well. Last but not least, Gabriel "Gurita" Nicolau gets an enthusiastic thumbs-up for towering the lacklustre vocals of "30 Minute" and delivering a very impressive performance throughout this album. He is still considered one of the finest singers Romania ever had and, listening to this LP, is very easy to understand why. 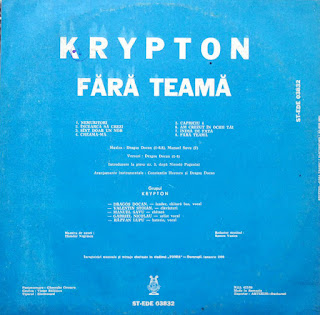 All eight songs are pretty good. OK, "Am Crezut in Ochii Tai" (the inevitable ballad) may not be as great as the other songs, but its four-and-a-half minutes are perfectly endurable and listenable, not ruining the listening experience in any sense. Apart from the aforementioned "Nemuritori", my favorites would be "Cheama-ma" (a very catchy hard rocker which was a huge sucess in Romania at the time), "Incearca Sa Crezi" (nice chorus), "Inima de Fata" and, most of all, the outstanding title track, maybe the best song I ever heard from a romanian Metal band (althought Hardton's "Ce Va Fi" is also fucking great). I remember how excited I was when I found an active link to download it, and I wasn't disappointed in any sense, as I still listen to it from time to time and it always sound good and fresh. What a find, my friends. Give yourselves a present and find it, too - satisfaction guaranteed, believe me.


Have you been involved with any of the bands mentioned here? Have any extra info and/or corrections? Please e-mail me at drequon@gmail.com and let me know!
Postado por Drequon às 20:26