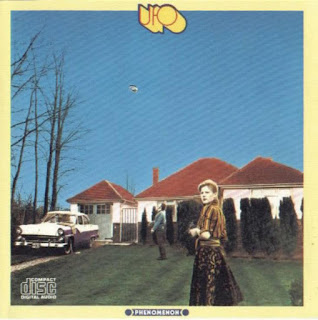 This is when UFO really got their party started. Not that everyone would agree with that, you know: the departure of original axeman Mick Bolton in early 1972 was not at all easy for the band to come through, and a fair percentage of music fans still feel the early incarnation of this much-loved flying saucer was the best of all - an assessment I don't really agree with, but everyone's entitled to their own opinions of course. There was a long-enduring misconception  going on that Mick Bolton was  the same guy involved with Mott the Hopple, Dexy's Midnight Runners and Linda McCartney's "Wide Prairie" LP (I even made such mistake myself for a while), but it's now safe to say that it's a simple case of similar names: as it transpires, the talented guitarist opted to settle down after his run with UFO was over, not being involved with any other bands of note. It seems he did a bit of guitar tech work for Michael Schenker and his Group back in the early '80s, and some say it was also the case during UFO's "Mechanix" era, but that's pretty much it as far as I know, which is a bit of a shame really. But oh well, just hope the guy is still enjoying a nice life in whatever activies he decided to focus on after his brief stint with the rock 'n' roll universe was over.

After trial runs with Larry Wallis (from Pink Fairies) and Bernie Marsden (then a near-unknown guitarist, that went as far as to record a few songs with UFO in 1973) the nucleus of Mogg-Way-Parker decided to invite German guitar hero Michael Schenker (from Scorpions) to join the fun. The kid was something of a child prodigy really, having made his first live show at age 11, and recording Scorpion's "Lonesome Crow" when he was only 16 years old. Scorpions were an opening act for UFO in Germany (a country where the British band was quite successful) and, though being a mere 18-year-old and not even knowing how to speak English, the youthful Schenker was tempted by UFO's offer and ultimately decided to embark. As you all know far too well by now, there couldn't have been a better choice, as Schenker was a decisive feature in metamorphosing UFO's sound and taking the band to a whole different level of popularity.

Although their collective talents are not fully developed just yet, "Phenomenom" (their first record with Chrysalis, a label that would provide them a much needed backing for over a decade) brings to the forefront all the things we learned to immediately recognise and love on UFO's trademark sound - most of it already present in the group's formula from an early stage, but surely not that prominent up to this point. The space rock days (that would mostly be confined to their "Flying" LP, to be fully honest) are not completely gone just yet, but now UFO are determined to be a hard / heavy band to make you shake your head and sing along, while keeping the subtlety and the will to experiment from the first records. And it works, no doubt about that.

'Intense' always have been, in my humble opinion, the perfect word to describe Schenker's playing: the man can attack the strings of his guitar like a demon, but his riffing and soloing never lack emotion, and this is the exact formula that made him one of the most inspiring guitarist in heavy rock. Pete Way and Andy Parker are more than happy to provide a tight backing for their youthful monster of a guitarist, and Phil Mogg's unmistakable voice was growing stronger with every release. Still, "Phenomenon" lacks something in the songwriting department, as Schenker and Mogg (both sharing the lion's share of composition at this point) were probably still getting used with each other, I suppose - something they seemingly never fully did, at least on a personal level, but oh well. It shows even on an all-time classic like "Doctor Doctor": unlike the exciting live staple of later years, the original studio version sound almost like a (very promising, admitedly) unfinished demo here, with some "oooh the mess I'm in" thrown in to fill the gaps in the lyrics. It's clear that this particular song would only fully mature in the grind of the live environment, which is to say something about just how good these guys worked together upon a stage (but that's a subject for another review, so let's not rush things just now, right?).

But it's only a minor criticism, you know, so don't be afraid to buy this album if you still don't have it in your collection. Songs such as "Too Young to Know", "Oh My" (one of my personal favorites here) "Queen of the Deep" and "Time on My Hands" may not be as powerful as the stuff soon to come, but are pleasant examples of concise, easy-to-enjoy hard rock songwriting, whereas "Crystal Light" and "Space Child" are nice semi-ballads with a melancholic touch that don't overstay their welcome at all. And if most of "Phenomenon" may fall short of being truly memorable, there's at least one tune here that is an undisputed classic for the ages: "Rock Bottom" is EASILY one of the finest guitar riffs I've ever heard, and I mean it! What a bloody awesome tune, and an everlasting testimony of UFO's ability to write engaging, ground-breaking hard/heavy music.

Have you been involved with any of the bands mentioned here? Have any extra info and/or corrections? Please e-mail me (drequon@gmail.com) and let me know!
Postado por Drequon às 18:54