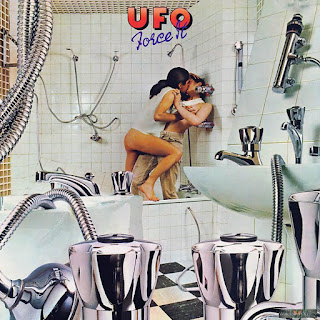 It's funny how UFO built a great reputation for themselves without actually recording a proper "classic" studio album. Don't get me wrong: they sure released some memorable stuff in the mid-to-late 1970s ("Force It" being one of these, of course) but I have the distinc feeling there's no album on UFO's studio discography that actually stands out as the pinnacle of their career or anything like that. Actually, live album "Strangers in the Night" is the best thing they ever did IMO, the crowning achievement of their career - the only album from the lads that's going to get a 5-star rating around here, sorry for the spoiler. I personally think that a perfect album must be a near flawless compilation of songs, or else a truly groundbreaking release in its own right, and none of UFO's studio LPs really fit the criteria, I'm afraid - a feat that their marvellous second live album achieves with great aplomb, but let's take reviews one at a time, right? Which is not to say their studio efforts are useless, of course: "Force It" is the first of at least three excellent albums in a row, and surely one of the finest in their discography too. You can count the 4-star rating as an almost perfect score if you like!

The metamorphosis ignited by "Phenomenon" is now complete. The lenghty jams and pieces of experimentation from their early releases are left behind for good: from this point onwards, UFO comes out like a confident and intense hard/heavy proposition, a group of musicians that know very well what they're doing and what they want to achieve. What was loose now is real tight, if you know what I mean, and still it's not like the adventurous spirit is nowhere to be found - quite the opposite actually, as many of the band's finest moments are more than adequate to demonstrate. The fundamental change here have little to do with creativity: it's a matter of approach if you like, being in control of the songs rather than trying to catch clues while playing them. It was the right choice in the end, and a lifetime of rock and roll achievements are there to bear witness of their triumph.

Schenker and Mogg are a much stronger songwriting theme now, and Pete Way's contributions are well fit into place too, so even the most casual listener may rest assured there's lots of fun to be found within the grooves. Opening  tracks "Let it Roll" and "Shoot Shoot" represent their harder edge in no uncertain terms, both being staples to UFO's setlists to this day. I'd even say that "Let it Roll" is one of the finest songs ever penned by the group: heavy and engaging, but also featuring a convoluted instrumental section that captures the listener's imagination and never let it go. Trully brilliant stuff. On the other hand, tunes like ballad "High Flyer" and the excellent, somewhat somber "Too Much of Nothing" are prime examples of how serious and pensive UFO could be when circumstances allow.

The album's stand-out track, though, has to be the truly amazing "Out in the Street". It's easily one of the most well-crafted things they ever recorded, an emotional roller-coaster of a song which is also their first recording with prominent keyboard arrangements (performed by Ten Years After's Chick Churchill). I guess the excellent results of this composition set the collective minds of UFO into augmenting their group with a dedicated keyboardist, something that took them some effort to fulfill but undoubtedly was all for the best in terms of music itself.

The hard-rocking "Mother Mary" would also become a live favorite, and it's a shame that the unremarkable "Dance Your Life Away" is here to lower the album's rating, as it could surely have been replaced by something more substantial. The final duo "This Kid's / Between the Walls" is also something of a letdown if you ask me - and yeah, I know many rockers out there regard the first portion as a classic, but I honestly feel it pales somewhat compared with everything that happened before it, and the anodyne accompanying instrumental cut doesn't help matters at all. Apart from these minor shortcomings, though, "Force it" is a excellent and extremely respectable LP that deserve every cent of your hard-earned money, and the eye-catching, provocative cover (at the time, at least) is a personal favorite for me as well. If you want an introduction to UFO and would prefer not to start with a live album, "Force It" is the perfect buy for you.

Have you been involved with any of the bands mentioned here? Have any extra info and/or corrections? Please e-mail me (drequon@gmail.com) and let me know!
Postado por Drequon às 16:40