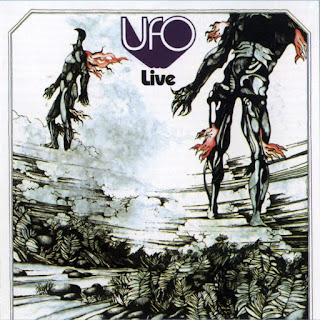 Given that the early albums from UFO didn't exactly skyrocket to the top of English and American charts, the Beacon label wasn't exactly enthusiastic about offering the lads a contract extension, which meant the band were left with no firm financial backing for a while. The departure of original axeman Mick Bolton in the early days of 1972 was also something of a shock, and it's fair to say that the group's future was effectively in doubt by this juncture. As many bands do when faced with similar adversities, UFO kept plugging in regardless, bringing Larry Wallis in to perform guitar duties and playing as many gigs as possible wherever a venue would have them.

Despite the modest sales figures of their first two LPs, UFO had a strong following in some specific countries, most of all Japan - so it was only natural that Stateside (the label that distributed UFO's music for the Japanese market) opted to issue a live LP, taken from a concert at Hibiya Park in Tokyo on September 25, 1971. Originally released under the name "U.F.O. Landed Japan" shortly before Christmas 1971, the LP came to be known as the more straightforward "Live" once it was issued in Germany by Decca sometime in 1972 - a packaging that is surely the more recognizable version, being the template for countless reissues ever since. With that in mind, let's just call the album "Live" from now on to avoid any confusion, though acknowledging that it originally came out under a different guise.

It makes for an interesting listen nowadays, that's for sure, as it shows that the distinctive features one can hear in UFO's early studio offerings were also discernible (though in slightly different terms) when they were upon a stage back then. The instrumental sections are very prominent, the band as a whole being much more keen to jam and improvise than on later live recordings. To be frank, the mood around here is very much the mood of 1970s' live rock performances in general: expanding, exploring and rearranging songs rather than simply reproducing it more or less like the studio versions. And it's quite fascinating to hear UFO playing in such a jam-oriented style, especially when you consider that they would adopt a much more strict, no-nonsense approach for most of their live endeavors in years to come. Fortunately, the enthusiastic nature of the band's live delivery seems to have been a constant, being a much-welcomed feature in all of their concert releases through the years - and there are quite a few, you know, and they're all very good, you know.

Recorded while Mick Bolton was still in the band, most songs taken from that night's setlist are from UFO's first album - an understandable option, no doubt, as I suppose it would be hard to fully recapture all the oddball "UFO 2: Flying" ambiences upon a stage. Curiously, the best song from "Live" is the only one taken from their second studio effort: "Prince Kajuku" sounds extremely intense here, the natural extra energy of a live performance adding lots of heaviness to the whole thing - and man this riff kicks ass!  It's also the track that sounds closer to their "Strangers in the Night" period, so perhaps my special liking to it is not a mere coincidence.

Also worthy of mention is "Follow You Home" (they one they ripped off from The Kinks' "You Really Got Me", if you remember the review for "UFO 1"), where they show some pleasing sense of humor by including excerpts from... "You Really Got Me" from The Kinks! Maybe it was a way to acknowledge the coincidence, or else it was the whole idea all along; in any case, it was a spirited move, improving the otherwise unspectacular song with a lighter, playful (and very much welcome) atmosphere. There's even a song that never appeared on any other record from the band, before or ever since, a Paul Butterfield cover called "Loving Cup" - not a truly memorable rendition to be honest, but also far away from any sort of letdown. The sound quality is nice throughout, the band's musicianship is tight and, though some songs are a bit longer than they should ("Boogie for George" gets boring halfway through, for instance), "Live" fulfills its mission without any major hiccups, being a good album to have around if you're interested in UFO's formative years. 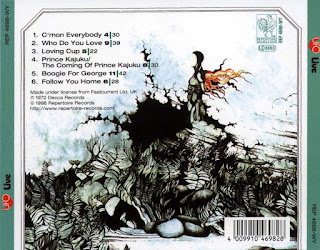 You see, finding a fitting substitute to Mick Bolton took UFO way more time than originally expected: Larry Wallis left the group after a mere eight months (he would later enjoy productive spells with Pink Fairies and Motörhead), being replaced by then-unknown Bernie Mardsen later in 1972. The guitarist took part in a European tour early next year and got as far as to record a handful of demos, but the Mogg-Way-Parker nucleus concluded Bernie (a future member of Babe Ruth and Whitesnake) wasn't really what the band needed, and made their way to Germany to recruit the youthful Michael Schenker (then a mere 18-years-old) from Scorpions in June 1973. Now under the auspices of Chrysalis Records, UFO was soon to become the entity we all know and love, but let's not rush things, right? See you in the next review, bye bye \m/

Have you been involved with any of the bands mentioned here? Have any extra info and/or corrections? Please e-mail me (drequon@gmail.com) and let me know!
Postado por Drequon às 18:30