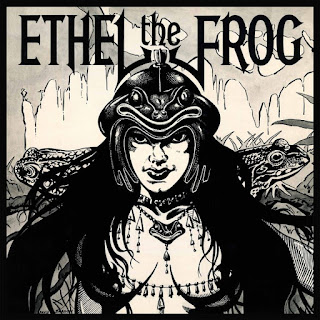 Saying that Ethel the Frog were a hot prospect for British metal in 1980 would be a bit of an overstatement perhaps, but it's fair to point out the undisputed fact that they would have never signed the dotted line with the mighty EMI if there wasn't any genuine potential going on. Doing the rounds since 1976 at least, this four-piece were seemingly huge fans of Monty Python ("Ethel the Frog" being the name of a fictitious BBC documentary mentioned on a classic sketch from the comedy group), but also the subject of a fair bit of adulation on their local Humberside area, having already released a introductory 7'' ("Eleanor Rigby" B/W "Whatever Happened to Love) in 1978 - a piece of wax that safely put them among the pioneering combos from the entire NWOBHM.

Doug Sheppard (V/G), Paul Tognola (G), Terry Hopkinson (B) and Paul Conyers (D) never shied away from the hard work necessary to make a band stand out in the crowd, and their efforts were finally rewarded when the now-legendary DJ Neal Kay recommended them for inclusion on the "Metal for Muthas" compilation. With their "Fight Back" number being regarded as one of the finest cuts from the LP, EMI felt there was enough mileage to justify the investment on a full LP. Curiously, no recording sessions were commissioned for such a purpose: after listening to their demo recordings the lads had under their possession, the executives involved felt the material had the standards required to be released in its original form, simply choosing the most capable tunes to comprise the eponymous LP.

Ethel the Frog's cover to "Eleanor Rigby" (yeah, that one) was seemingly identified as the selling point for the album, with the label getting as far as releasing a second single around it in 1980 (this time with "Fight Back" as the B-side). It's not groundbreaking stuff to be honest, being miles away from the ingenuity displayed by Jeddah when reworking the same song for their sole 7'' - easily my favorite version for a Beatles' song from the entire NWOBHM, incidentally (not that there ever was that much of a competition, but never mind). Still, I personally like this particular recording: it's a safe, mid-tempo-rocker version with very little to offer in terms of reinvention, but it sounds very heartfelt and not like a shameless cash-in at all, which makes for an interesting enough listen and a good way to open proceedings.

Despite not being strong enough to qualify as a classic NWOBHM record, Ethel the Frog's sole LP is mostly very good, you see. Light-hearted, upbeat tunes like "Apple of Your Eye" and "Fight Back" truly epitomize what NWOBHM was all about at the time, while less predictable, convoluted songs like "Bleeding Heart" (nice atmospheric parts in places) and most of all "Fire Bird" serve to show that the lads were more than capable to create some quite individualistic music when determined to do so. But my personal highlight would perhaps be "Whatever Happened to Love": the fast-paced riffing is very functional, the arrangements are actually pretty inventive for such a straight-to-the-point track, and it also presents a rare case of let's-turn-the-song's-title-into-a-chorus which actually works remarkably well, pleasantly sticking to your mind for days afterwards. Give it a listen and, in case you don't feel like listening it ever again, then I'm afraid NWOBHM isn't really your cup of tea.

The sound quality is respectable throughout (way better than one would expect from demo tapes, actually), but I'd say the compilers could have applied a slightly more strict quality control to this one, given that the early-period, still-developing nature of some songs is too clear to be ignored. "Staying on My Mind" (an ultra-predictable, almost yawn-inducing boogie that Status Quo would have churned out in their sleep) "Why Don't You Ask" (ditto) and "You Need Wheels" (a biker-friendly, anthemic tune that is not that bad, but would have surely benefited from a better chorus) are not in the same league of the better cuts, as simple as that. "Don't Do it" is as predictable as it gets (with a song title like that, it hardly comes as a surprise), and you can almost sing the chorus along without having ever listened to it (seriously) - but it's all very enthusiastic, admittedly, and I like the basslines on this one, so let's gallantly spare it from any harsh criticism. 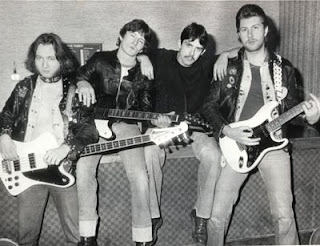 Similarly, some of Doug Sheppard's singing performances are a bit substandard if you ask me, something that could surely have been corrected if EMI had ever bothered to offer the lads a proper recording budget. But let's not blow these shortcomings out of proportion: "Ethel the Frog" is a worthy addition to any respectable NWOBHM collection, and a recent LP/CD reissue by High Roller Records means you won't have to spend too much of your hard-earned money in order to obtain a copy.

As we all know by now, the band's association with such a powerful record company didn't make much of a difference, as Ethel the Frog had mostly ceased to exist by the time the original LP was out. Apparently, Doug Sheppard got increasingly disenchanted with the hardships of the road, a very significant development considering that he was also the band's producer and main songwriter - and this, added to bassist Terry Hopkinson's decision to quit the music scene and seek a degree, pretty much signaled the end of the line for the ensemble. With the band's activities reduced to a minimal, it's perfectly understandable that EMI decided to bet their chips on Angel Witch and Iron Maiden instead, making little (if any) effort to promote Ethel the Frog's release as a result. Paul Tognola and Paul Conyers would persevere in the scene though, soon joining the ranks of Salem - a band that have a fair number of releases to their credit, all sure to be reviewed around here in due course.

All songs by Sheppard, except 1 by Lennon/McCartney and 6 by Sheppard/Conyers/Tognola/Hopkinson

Have you been involved with any of the bands mentioned here? Have any extra info and/or corrections? Please e-mail me (drequon@gmail.com) and let me know!
Postado por Drequon às 16:07