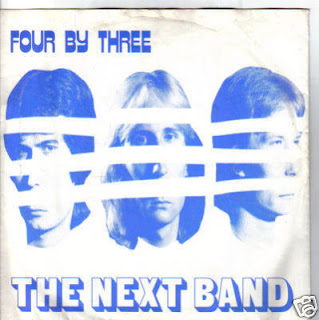 This reasonably obscure EP from 1978 may not fit that well into the NWOBHM timeline, but it more than deserves the tag if we judge it on musical merits alone, and the musicians involved are also of interest for British Metal fanatics, so let's treat it as a NWOBHM release from now on, shall we? The humble origins of The Next Band (quite a bad name for a Heavy Metal band, guys) seemingly trace back to 1977 (the very height of punk rock), with Rocky Newton (V/B), John Lockton (G) and Frank Noon (D) joining forces to form a hard rocking outfit to call their own. The "Four By Three" EP came around a year after the group's inception, recorded at the Fairview Studios in Kingston upon Hull and released in september of that year, according to some sources.

It was a very early release by NWOBHM standards, for sure, but those of us with a fondness for the genre will surely find good reasons to rejoice on this humble 7''. It's not archetypal NWOBHM at all, that's for granted - it sounds more like a quirky variant of the usual 70's Hard/Heavy music, borrowing a bit of the punk rock intensity, but not more than that. Malc McMillan, in his NWOBHM Encyclopedia, compares Next Band with the slightly more well-known Money, and it's a good reference point indeed, although I reckon that this particular bunch is a tad more heavier and intense. It's a curious and historically-relevant release, as it really justifies the notion of a pre-NWOBHM period in British heavy music - and it makes you ponder just how much the NWOBHM boom in the early 80s could actually be something being gestated for quite a while prior to its acknowledged influx. From the four cuts included, my personal favorite would be "Close Encounters" (yeah, it does start with the inevitable five-note intro from the movie), a direct, heavy rocker with a simple-but-nice chorus and good guitar work in a very adequate NWOBHM vein. The semi-atmospheric mid section could have been chopped off, I would say, but it's brief enough to be overlooked, the final results of the track being enjoyable as a whole. "Never On A Win" is more of a melodic tune with Thin Lizzy-like twin guitar, which atempts to create a sing-along chorus without much of a success, but we're sure far from any disaster scenario here. Quite the reverse actually, as the track works well as a whole and may put a smile on the face of many listeners.

The B side starts with "Red Alert", a run-of-the-mill, mid-tempo rocker that won't set any pulses racing but won't make for a painful listening experience neither, although the semi-acoustic interlude (they seem to have had something of a difficulty with mid sections, you know) is entirely disposable. The final track "Too Many Losers" is quite an improvement, though, being another intense number with guitar work totally attuned with the NWOBHM revolution that was lurking just around the corner. And the (notably heavy) mid section actually works quite well here too! The sound production is adequate (albeit slightly poorly mixed IMO) and the Metalomether alarms reasonably loud on this one, so don't hesitate to add it to your collection if you find it for sale at a payable price. Damn sure I will do so if I ever have the chance! 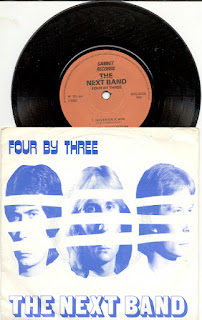 As I'm sure many of you are aware, drummer Frank Noon would actually assist the later-to-become-huge Def Leppard on their vinyl debut EP in late 1978 - the two bands being close friends and seemingly sharing the idea of putting some self-released vinyl out for the masses to purchase (they even recorded it in the same studio facility, you know). Noon was never an actual member of Def Leppard, though - and, unlike their feline-inspired local rivals, The Next Band was never to reach any nationwide stardom, although they tried to reinvent themselves as Red Alert in 1979, in a bid to suitably join the NWOBHM bandwagon. Red Alert would soon rename themselves as Wildfire (not to be confused with the band of the "Brute Force and Ignorance" and "Summer Lightning" LPs), but didn't manage to last long in this incarnation, being disbanded just a few weeks after their "Run to Ground" 7'' was released in late 1980. Frank Noon and Rocky Newton would join Lionheart, while John Lockton lent his services to Wild Horses, Badlands and also German heavy rockers Victory and Rated X in later years. After Lionheart was no more, Rocky Newton found employment on the McAuley Schenker Group for a number of years, while sticksman Frank Noon kept himself quite busy, lending his services to bands such as Stampede, Dianno, Roadhouse (where he joined forces with ex-Def Leppard's guitarist Pete Willis, incidentally), Waysted and Bernie Tormé, among many others. He is still active to this day (or so it seems), which is heartwarming, I would say.

Have you been involved with any of the bands mentioned here? Have any extra info and/or corrections? Please e-mail me at drequon@gmail.com and let me know!
Postado por Drequon às 16:22