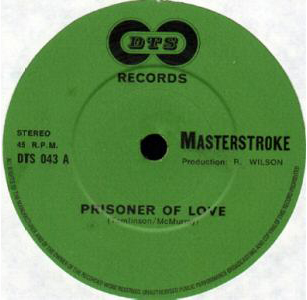 Another one of those immensely obscure releases that became a bit less mysterious in later years, Masterstroke's sole 7'' is actually quite a good record, with two very enjoyable tunes in true NWOBHM fashion. The humble begginings of this elusive entity can be traced back to 1981 in Kent (UK), when the creative nucleus of guitarist Jimmy McFarnell, keyboardist Keith Tomlinson and singer Andy McMurray joined forces to create a Heavy Rock proposition to call their own. In the recording session that would be used for their sole vinyl release, they were assisted by Jim Wheatley (D), Simon Mills (G) and Neil Basford (B), a formation that seems to have been the most stable during the band's existence. The single came out sometime in 1982, released by the tiny DTS Records, and seems to have received a small pressing in the first place, as copies are seldom seen nowadays.

Both songs of the single are very enjoyable, although they're considerably different one from another. "Prisoner of Love" is a melodic tune who would not be out of place in your local rock radio station - if those responsible for the programming had any clue Masterstroke ever existed, that is. It has a easy-going structure and very catchy, sing-along vocal lines - the chorus, in special, is likely to stick into your mind for quite a while - carried along with great finesse by singer Andy McMurray. It's not the most skull-crushingly heavy assault you'll ever listen to in your live, OK, but it sure delivers its promise and can put a smile on the face of most NWOBHM enthusiasts. "Burning Heart", on the other hand, is a more groovy, mid-tempo heavy rocker with prominent guitars and a huge dose of energy that will surely set some feet and neck in motion. Very nice songs indeed, and a band that truly deserved better things. If you good reader EVER happen to have a copy you'd want to sell (or donate, who knows?), don't be shy and please let me know! :)

In spite of the many talents Masterstroke shown to possess in this promising 7'', the band didn't really last the distance. They tried to keep things going with some different musicians (drummer Albert Ulvmoen, for instance, joined the band towards the end of their collective existence), but unfortunately things didn't work out that well and Masterstroke was pretty much disbanded at the tail end of 1984. Of those involved, it seems that singer Andy McMurray was the one to keep himself more busy, assuming the mike stand in a number of bands - namely Shade, Catch 22, Tickled Pink, Soldier Blue and Spice"o"Life - through the years. Recently, he was (and probably still is) doing the rounds in User Friendly, a blues/boogie/rock concern, and it's nice to learn that he is seemingly still active - and that his voice still sound as strong as ever. He was helped in User Friendly by ex-Masterstroke member Neil Basford for a while, and it's great to know that Jimmy McFarnell is also plugging his guitar with User Friendly at the time of writing. Drummer Jim Wheatley was nice enough to get in touch via e-mail (thanks, my friend) and he's also back to music after a long hiatus,  playing a covers set with a blues rock band called The Flood. It's heartwarming to know that a good percentage of Masterstroke's stalwarts are still involved with music, and I wish them the best for now on. I'll surely drink to that!

Have you been involved with any of the bands mentioned here? Have any extra info and/or corrections? Please e-mail me at drequon@gmail.com and let me know!
Postado por Drequon às 12:57