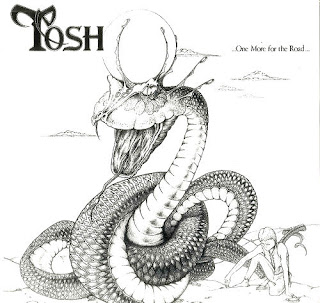 
The humble beginnings of the english band known as Tosh took part in the first half of the 70s, when Howard 'Tosh' Midlane (V/G, a musician whose activities can be tracked back as early as the late 60s) and Dave Palmer (V/D) toured around Cornwall and South Wales as a duo under the (truly hopeless) name of Bicycle. They were more of a country/folk/pop/pub-rock proposition with jokey cabaret cacoethes by this stage, but things would start changing in earnest, as a proper band took form via the addition of bass guitar and keyboards and the adoption of a (slightly) better monicker, Tosh. A stable unit took for in the later half of the decade, with Tosh himself and Dave Palmer being assisted by Tony Cousins (K/V) and Tim Collingwood on bass, later replaced by Reg Hancock. This 4-piece unit was a frequent live attraction in their locality towards the early 80s, and the changes in personnel also caused a shift in musical direction, their small-crowd-pleasing mixture of old gradually being augmented with heavier, more serious and adventurous compositions.

In fact, it seems that Tosh's cruise into increasingly more metallic waters was something of a request from the other band members, that felt not so comfortable with the lightweight nature of the band's repertoire. As Tosh himself was the main songwriter, the fact that he agreed on writing some heavier tunes shows how much of a friend-loving individual (and a versatile composer too) he is. According to keyboardist Tony Cousins, the shift in direction prompted drummer Dave Palmer to become the main singer, as everyone thought his voice was more suited to the more rocking approach of the band. He was replaced on drums by Steve Jackson.

Actually, things get a bit confusing by the time their sole LP, "One More for the Road", was recorded. Although not credited on the album, it's perfectly possible that Reg Hancock actually recorded all basslines, and it's kinda baffling that Howard 'Tosh' Midlane and Tony Cousins are credited for vocal duties alongside Dave Palmer, as there's no indication that Palmer was actually the band's proper singer. Also credited are Steve Turner (G/B, seemingly involved with a group called Bucket Boys) and sax player Phil Boucherat, although both more probably acted in a guest capacity rather than being proper members of Tosh. Maybe the guitarist's appearance was a retribution of sorts, as the whole album was recorded in his personal studio, but it's no more than a conjecture of mine, you know.

To be frank, "One More for the Road" doesn't really sound like a proper album, as its two sides display very different styles of music. The A side is the heaviest and showcases the more obvious progressive rock influences, with two very lenghty songs full of climates and instrumental parts. "Julius" is the most adventurous number by far, being my favorite song on the album too. It's not like they reinvented the wheel, that's for sure - but they managed to get some good ideas together and came out with an interesting, atmospheric epic tune with good guitar duels and keyboard interventions, a song that even reminds me of Shaftsbury (a band I actually enjoy quite a lot) in places. "Queen of Tiger Bay" doesn't rate that high on my Metalomether to be honest, although it's probably the most metallic song of the entire LP and seems to have been a true favorite among their small-but-loyal following. It's not a bad song at all, but the (very simple) central idea doesn't qualify for a 8-minute opus, pretty much losing steam halfway through. The solos are quite nice, though. 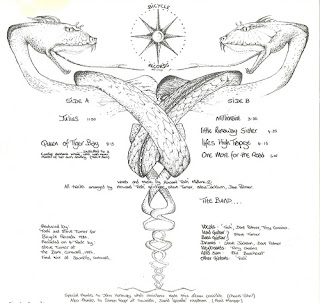 Still, it's a pretty respectable first half, that hints of better things to come on the flipside. Shockingly, though, the four remaining numbers are much more linked with the pub-rock roots of their 70s than anything more metallic or contemporary. Maybe those songs were old live favorites of sorts and they felt it would be mandatory to include it so the album would be more appealing for the loyal fan. Who knows? Wherever the explanation lies, songs like "One More for the Road" (with more than a hint of Beatles' "Let it Be", incidentally) and "Millionaire" sound dated and unsubstantial from the first listen, rendered utterly forgettable as a result. Semi-ballad "Little Runaway Sister" shows slightly more inventive arrangements, although the prominent saxophone doesn't really help matters, to be point-blank honest. In the end, I guess "Life's High Trapeze" is a bit of saving grace: a slightly inventive song that may not set any pulses racing, but can heard from start to finish without causing any grimaces at all. All things considered, though, the B-side of this LP is far from memorable IMO, failing to live up to the promise of the first two songs. Anyway, it may be a good idea for the open-minded NWOBHM collector to buy this album if it comes out for sale at a reasonable price.

The band that delivered "One More for the Road" didn't last for long, though: unable to fully commit with the hectic touring routine scheduled by Mr. Tosh (he even organized a charity tour called "The Walk", that would cross Wales north to south and end up in Cornwall, playing gigs daily along the way), Tony Cousins and Reg Hancock left Tosh for good, soon followed by drummer Steve Jackson.  Howard 'Tosh' Midlane and Dave Palmer reassembled the Tosh venture with Tom Haywood (D) and Billy Blister (I have a distinct feeling it wasn't his real surname, you know) on bass, which curiosly led the whole endeavour to be called The Blister Band in a few live outings, for no tangible reason. In a later stage, Mr. Blister was replaced by Alan Ross (earlier with the Flying Tygers) and violinist Jiz Brooks and percussionist Arthur Kurwyn would also join the outfit for a while, which tend to suggest that they were no longer trying that hard to be a Heavy Metal band around this juncture.

It seems that the Tosh band died a natural death in the mid-80s, with most of the musicians failing to appear in any other bands of note. Dave Palmer would assemble a small-pub attraction called No Picnic which is still pretty much active to this day, whereas Mr. Tosh himself apparently reassumed his country/folk persona as a solo artist. Surprisingly, a comeback gig happened as late as 1994, the musicians reuniting for a moving, heartwarming homage to Tim Haywood, diagnosed with terminal cancer. It was surely a beautiful gesture, and the drummer himself took part in the gig, which was even released in a tiny CD edition. Unfortunately, the fatal disease took its toll and Haywood died a few months later. As for the hard rocking incarnation of the Tosh venture, I guess there's no prospect of a get-together in the foreseeable future. But never say never, you know. 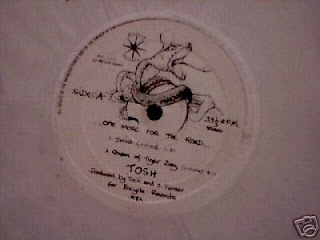 Extra thanks for Strappado HM Rarities for audio files!

Have you been involved with any of the bands mentioned here? Have any extra info and/or corrections? Please e-mail me at drequon@gmail.com and let me know!
Postado por Drequon às 11:52