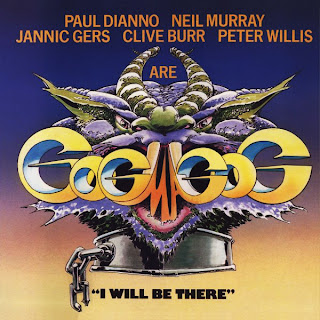 It's no secret to any dedicated Heavy Metal fan that even the most well-regarded musicians of the genre are vulnerable to some painful mistakes from time to time. I mean, they're human beings after all, right? Unfortunately, some of these regrettable experiences end up being immortalised in vinyl or CD format, becoming either a laughing stock or a ghost from the past to haunt some otherwise serious and extremely respectable artists. Gogmagog's sole EP from 1985 is one of those vinyl disasters: a venture that seemed to be very promising at first, but soon revealed itself as an unmitigated musical tragedy.

I mean, the unsuspecting metalhead can easily get quite excited about it, looking at the band credits. Paul Di'Anno (the already legendary ex-singer of Iron Maiden), Clive Burr (another ex-Maiden stalwart, who also handle the sticks for Samson), Janick Gers (ex-White Spirit and Gillan guitarist), Neil Murray (bass player of Gary Moore and Whitesnake fame) and Pete Willis (who lend his guitar talents to the immensely popular Def Leppard for a number of years). Looks promising, huh? And maybe it could have been a NWOBHM monster in its own right, if these undeniably capable musicians were willing to concentrate their efforts into being a proper band. Something that never was the case, unfortunately.

In fact, Gogmagog is an idea that came from the mind of Jonathan King, a record producer and band manager that went as far as to head Decca Records during the 60s and 70s, being also responsible for discovering highly successful groups such as Genesis, Bay City Rollers and 10cc. Considering that the most accesible branch of NWOBHM could be an interesting niche (and a shortcut for some ready cash, of course), King decided to assemble a Heavy Metal supergroup, enrolling some household names in British heavy music and hoping to get the show on the road with a huge stage production and massive media coverage. As you all can see by now, it never was the case of great musicians choosing to join forces in a new band: Gogmagog was pretty much the result of a series of phone calls, proposed contracts and commercial viabilities. 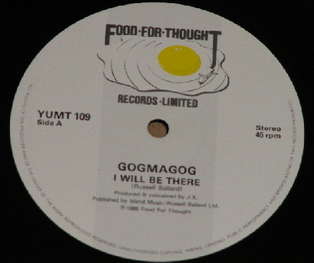 Some of the musicians invited to the venture refused to took any role in it, namely bassist John Entwistle (ex-The Who and then a solo artist) and drummer Cozy Powell (world-wide famous for his stints with Rainbow and Whitesnake). But Mr. King somehow managed to convince (outwit?) some well-respected players to sign the dotted line. To their credit, it's worth noting that some of the guys were in a slightly difficult situation at the time. Paul Di'Anno was trying to reassess his situation after a very poorly-received solo album; Pete Willis was still to figure out what to do after his departure from Def Leppard; and Clive Burr, after a brief period with french heavy rockers Trust, found no success in his post-Maiden project Stratus, in which he was helped by some ex-members of Praying Mantis. All things considered, it's not unreasonable to infer that these musicians saw in Gogmagog, more than a good money-maker, a genuine chance to put their careers back on track. Soon they would find out just how wrong they were...

Some people have suggested that the 3 tracks featured in the Gogmagog EP were taken from a larger batch of recorded numbers, perhaps sessions for an intended LP that never came out. It's not true, I must reveal: the three songs are (fortunately, I guess) the only ones Gogmagog ever laid on tape, in a very quickly-assembled recording session aimed to convince promoters to finance an UK tour. The songs were written by Jonathan King himself with the help of Russ Ballard - a much in-demand songwriter in the first half of the 80s, who wrote some good NWOBHM songs such as "Tonight" (Tokyo Blade) and "Riding with the Angels" (Samson). The fact that the material wasn't anything to set the world ablaze, though, wouldn't encourage any music entrepeneurs to splash the cash and, in spite of Jonathan King's best efforts (at least I suppose he made his best efforts, you know), not a single show ever took place. The recruited musicians surely figured out in no time how hopeless the whole venture was and jumped off the Gogmagog wagon in a matter of weeks, maybe secretly wishing none of it would ever see the light of day. 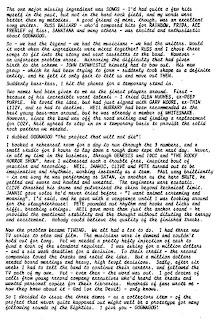 Oh well, it was surely a case of wishful thinking, as Mr. King would never lose a chance to make some money out of it. The "I Will Be There" 12'' LP actually came to be released in 1985 via Food For Thought. Although King offers an implausible version of the events surrounding the band and its sole release (click on the image to read for yourself), now the world had the chance to make their own minds about the Gogmagog fiasco. To be fair, I think the title-track is a reasonably good mid-tempo number with some good ideas on display (and Paul Di'Anno does a commendable job here too), so it's not a total disaster when it comes to musical merits. But the other two songs featured ("Living in a Fucking Time Warp", which rips off Judas Priest's "Living After Midnight" in major fashion, and "It's Illegal, It's Immoral, It's Unhealthy, But It's Fun") are not only bad: frankly, both are terrible. The record as a whole has a unmistakeable feeling of fraud, like someone who did not have a single clue on Heavy Metal trying to deceive some unwary listeners - and let's face it, that's pretty much the exact case here.

As I'm sure you all already figured out by now, Gogmagog's EP is a plain embarassing release (although the artwork is actually not bad at all), one that may only appeal to the most obsessive Iron Maiden completists - and not on musical grounds, readers take note. It comes as no surprise to learn that the five musicians involved weren't exactly proud of the whole debacle - Jannick Gers and Pete Willis mentioned it in not-remotely-fond terms in later interviews, admiting with point-blank honesty that it was little more than a shameless cash-in, whereas Paul Di'Anno simply refused to comment on the subject for the time being. Fortunately, all the guys managed to move on, with different levels of success. Paul Di'Anno formed Battlezone and Killers (and also recorded a number of quite bizarre, not-very-respectable projects such as the "Original Iron Men" series), but later decided to just keep playing the same old Maiden songs all over the world - something that I always found to be quite sad, as I'm sure he could have done better with his music career. Today, he's engaged in a so-called Farewell Tour (his health being quite problematic for over a decade), a jaunt that recently visited my home country Brazil (I didn't attend any of the concerts, unfortunately).

Neil Murray would later record with Black Sabbath, Bow Wow, Fastway, Badlands, Brian May, Tony Martin and countless others. Pete Willis soon started his Nightrun project, later renamed as Roadhouse and that came as far as to release an eponymous album of not-really-impressive melodic rock in 1991. Nowadays, he lives a good live outside of music, running a property management company in Sheffield, UK. Janick Gers would be lost in the wilderness for a number of years before Lady Luck smiled to him - at first with Bruce Dickinson's solo project, later as a member of the mighty Iron Maiden. Clive Burr had his ventures too, sitting at the drumstool in bands such as Praying Mantis, Desperado and Elixir before being diagnosed with multiple sclerosis - a disease that ultimately (and sadly) led to his demise in early 2013. I'm thankful for all the good music, and may God rest his soul. 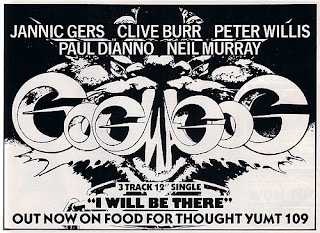 And what about Jonathan King, you ask me? Well, I guess he wasn't done with Heavy Metal just yet, and soon became the manager of Briar, a youthful British band that released a nice and enjoyable album called "Too Young" in 1985. Lured by the tales of glory of Mr. King, the once-promising foursome delivered a second album called "Crown of Thorns" in 1987, a truly dismal LP which even presents a terrible reworking of Ritchie Valens' "La Bamba" for no fathomable reason. Briar even re-recorded the lenghty-and-stupidly-titled "It's Illegal, It's Immoral, It's Unhealthy, But It's Fun" (a composition that takes the let's-repeat-the-name-of-the-song-over-and-over choruses to a whole new level) in a later single before giving up for good in the early-to-mid 90s, in one of the most unfortunate sequence of events in the entire NWOBHM. After experiencing some huge problems with The Law (he even endured some time behind bars for child abuse, an indictment he always vehemently denied), Mr. King went to play a major role in the successful careers of musical endeavours such as The Corrs and Chumbawamba. No further connections with the Heavy Metal universe, fortunately.