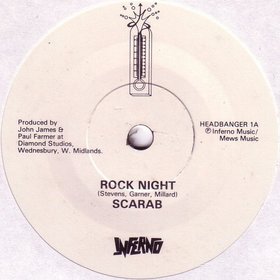 
Everyone with a true interest in obscure heavy music will be confronted with some inextricably obscure situations from time to time: bands that are so esoteric that it's almost like they never existed at all, their extremely rare releases being fruits of someone's imagination that somehow managed to materialise. Sometimes luck is on your side, and the wonderful history behind the music comes out after long research - I've been particularly lucky lately and a few exclusive biographies are in the making at this very moment, so I would kindly suggest you to watch this space for updates.  Other cases, unfortunately, are seemingly hopeless - and this particular Scarab from Wednesbury UK (not to be confused with the more well-known bunch responsible for the "Poltergeist" single, for instance) fits like a glove to this scenario. All you can state about this band is their city of origin, the surnames of the songwriters (Stevens, Garner and Millard, whoever they were) and that they released a 7'' single by the utterly minuscule Inferno label sometime in 1981.

"Rock Night" and "Wicked Women" are energectic Hard / Heavy tunes with a very direct approach, almost 'punkish' when it comes to song structures: an adequate riff, an extremely simple half-chorus repeating the name of the track, some brief individual instrumentations and lo and behold, the song is over. Actually, "Rock Night" is such a let's-get-straight-to-the-point type of song that it barely reaches the 2-minute mark: it comes, screams ROCK NAEEEEEEEEEEEEE a few times in your face and it's gone without a trace. Oh well, there's a few solos here and some extremely simple lyrics there too, but you get the idea - it's so simple that it borders deconstructivism, which I very much doubt was the idea, but it's almost fascinating in a sense.

On the flipside, "Wicked Women" sounds almost like prog rock in comparision - it actually presents more than one riff (seriously, listen to it carefully and you will find the other one), at least. But there's nothing to resemble any sort of real complexity here, that's for sure - even the solos are pretty much the repeating of a few basic patterns, something that would most probably be penned by a beginner rather than a remotely experienced musician. And that's how Scarab sounds in the end of the day: like a bunch of reasonably talented, but very unexperienced young men trying to deliver some Heavy Metal with genuine enthusiasm, but not much else. Still, they show some promise as musicians (the singer stands out as the owner of a considerably powerful voice) and there's nothing potentially wrong in here, so I would advise you to spend a few bucks in it if you ever see this 7'' offered for sale at an reasonable price. 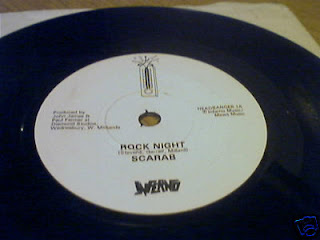 It's slightly frustrating to have such a pitiful ammount of info on Scarab - no one seems to really know who they were or where they came from, and there's very few tangible signs of live activity from this particular Scarab. Paul Britton, from the other Scarab (the one whose "Rolling Like Thunder" double-CD compilation was already reviewed in here), recollects their namesakes as opening for Jameson Raid sometime in 1980, but that's pretty much it. Will we ever know more about this mysterious version of Scarab? I sincerely hope so - if you happen to know ANYTHING else about this band, please kindly get in touch, will you?