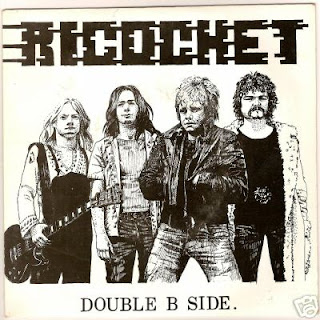 
I'm personally fascinated by NWOBHM and I would never try to deny it, but I try to be reasonable and understand that not all heavy rocking records made in the UK around the first half of the 80s are undiscovered masterpieces or demonstrations of enviable potential that never came to fruition. Many, many stuff tagged as NWOBHM actually suck - and of course, there's a huge number of records that may be appealing for collectors or aficionados but would not do much in favour of less charitable listeners. Therefore, I'm always a bit suspicious when a recording is described as an "undiscovered classic" of heavy music, as in many cases it's more a case of personal appreciation than anything more realistic. But of course, there are some extremely good stuff hidden out there, bands and recordings that are confined to the very dephts of NWOBHM underground scene but seriously should be heard by a wider audience - and the immensely capable Ricochet and their memorable "Double B Side" from 1980 can surely fit into this category.

Evolving, as Malc MacMillan explains in his must-read NWOBHM Encyclopedia, from an earlier act called Thorazine, Ricochet (good name, that) were doing the rounds in the West Midlands since the later half of the 70s, playing an unashamedly heavy style of music that would fit like a glove to the upcoming NWOBHM boom. Unfortunately, they never really managed to cause an impact outside their geographical area and didn't really last the distance at first, being pretty much disbanded as soon as 1982. Still, they went as far as to release a sole 7'' in their own Heavy Rock label, a single that looks good enough (nice logo, interesting drawing of the band members and all) and that sounds even better, believe me.

And oh man, were this guys GOOD or what. "Midas Light" is a song that have been deservedly praised by NWOBHM aficionados worldwide, but sometimes I just feel it doesn't have been praised enough - actually, it's not only a kick-ass song, but there's a lot of creativity and adventurous spirit in it too, and sometimes people just fail to acknowledge that. There's many unpredictable details in it: the guitar, for instance, is always adding some different layers, distortions, unexpected fills and leads - and it's always so damn HEAVY that you can't stop throwing shapes, no matter how much in awe you are. The singing is rude and intense, even with a pinch of debauch in it, carrying the lyrics along with such a conviction that you completely overlook the fact that the words actually don't make that much sense at all. They recorded quite a few versions of this seminal track, but I still think the one from the single is the best one: there's such a drive in it that defies description, a sort of urgency perhaps, like they needed to take the world by storm and they had to do it NOW. I guess it's perfectly possible to live a meaningful and healthy life without ever listening to this song, but I don't know how could that be and I would never want to find out - all things considered, "Midas Light" is a mandatory listen for everyone with some level of interest in NWOBHM, a really intense showcase of sheer Heavy Metal energy and genius. How can a band record such a track and still disappear into near-oblivion in later years is beyond me. 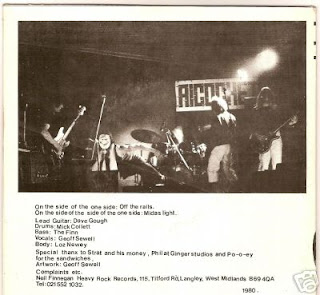 "Off the Rails" is obviously not as good as the previous "B-side" (let's face it, there's not that much competition in the whole Heavy Metal world for a track such as "Midas Light"), but it still rips in major fashion. The production tries to emulate the feeling of some sort of heavy party, with people talking and singing and screaming woo-hoo all over the song - and the musical contents are more than adequate for such a background, as the track itself is a very intense rocker with a straight-to-the-point structure and a rhythm that grabs you by the neck and makes you headbang along in a near-spinal-injury intensity. Another kick-ass song, no doubt, and you can consider yourself well advised to get hold of a copy of this 7'' if you ever have the chance. I know, a 5-star rating for an independent single may be a bit shocking perhaps, but I guess you good people will just have to deal with it. And if you happen to have one and feels like selling it, get in touch, as I would CERTAINLY be interested in buying it! :)

As I said above, Ricochet's sheer potential and enthusiasm were not enough to raise them to the nationwide success they damn surely deserved, and soon the group was no more. Bass player The Finn kept himself busy, relocating to Germany and assembling the Damien project, that went as far as to record a Mini-LP called "Words" in 1984 before the bassist return to UK and join The Handsome Beasts for a while. Talented guitarist Dave Gough, on the other hand, went to join a number of local outfits on very different musical styles, but also served time in Demolition towards the end of the group's existence. It comes as a huge (and pleasant) surprise to know that Ricochet actually reunited in the late 90s, recording a Mini-CD that reworks both tracks from the single and add a few previously-unreleased songs for great effect. Oh well, perhaps we better comment this release on a later post, right? 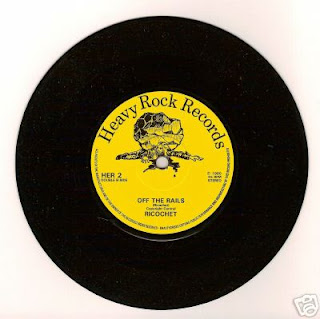 Have you been involved with any of the bands mentioned here? Have any extra info and/or corrections? Please e-mail me at drequon@gmail.com and let me know!
Postado por Drequon às 17:13