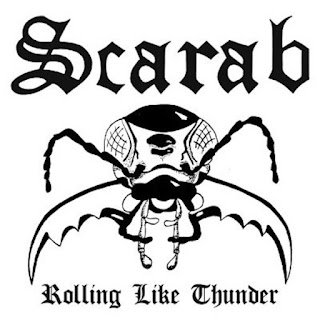 Since the first listen quite a while ago, I always held a mostly positive, but slightly mixed feeling about Scarab's "Poltergeist" single from 1984. Both songs were good, but I had the distinct feeling that "Poltergeist" was a little bit too confusing for its own good, full of different parts without a perceivable direction, while "Hell on Wheels" was a more concise, a tad heavier - and a lot more enjoyable - number. Anyway, it was a very interesting and promising 7'' single, and it was natural to wonder what their other songs would sound like. A knowledge that now we all can achieve, thanks to the mighty High Roller Records, who released the abrangent "Rolling Like Thunder" double-CD compilation in late 2011.

Scarab first came to be in mid 1981, when Paul Britton (G) and Steve Riley (D) were joined by Andy Lewis (V) and Gary Crowe (B). They recorded a few songs, made some plans to release their "Hell Hotel" song as a single in 1982, but this earlier formation was disbanded before any vinyl was pressed, with Lewis and Crowe making their leave. Nigel Shaw (ex-Strontium Dog) joined in as bassist, and Paul Britton took all singing duties to himself, calling Dave Parrish to support him as a second guitarist. With this formation, Scarab recorded most of its studio material (incluiding the now well-regarded "Poltergeist" single, released on Britton's own Pharaoh label) and made a lot of shows around the Midlands, consolidating a strong and dynamic brand of Metal which reminds me of bands such as Angel Witch, Ricochet and Overdrive - all very commendable comparisions, indeed. Towards the end of their existence, Paul Brookes (D) replaced Steve Riley, and the band recorded a couple more songs before ceasing all ativities in early 1986.

CD one starts with "Don't Stare" and "All Night Long" - both good songs, but nothing to really set pulses racing, to be honest. These songs are from their first studio adventure, in late 1981, still with Andy Lewis at the mike stand, so it's perfectly excusable that they just weren't ready to deliver the goods just yet. Things improve greatly with "For Whom Does the Bell Toll" and "Horsemen of the Apocalypse", both being complex, grandiose songs with fair ammounts of energy and creativity. The latter, incidentally, shows the same signs of structural confusion that I heard on "Poltergeist", although it's not enough to cause any fatal injuries. "Stop the Rock" is in a much more rock an' rollin' mood (yeah, you guessed it), and it's actually a very enjoyable song (despite the annoying vocal arrangements towards the end), whereas "Acid Trap", though not a bad song at all, fails to leave any lasting impression (well, in me at least). The first version of "Hell On Wheels" already shows what a nice piece of songwriting this song is, and it worths a careful listen for the slightly different lyrics and song structure. "Let Us Pray" attempts to be a somber, climatic epic ballad, but it turns out to be quite boring and uneventful - which is a different case entirely when it comes to "Rolling Like Thunder", a heavy-driven effort which can  induce a fair dose of headbanging, although the slow-tempo mid section is slightly out of place here. To finish proceedings, "Into the Labyrinth" - a slow, twisting heavy tale which achieves what "Let Us Pray" tries to no avail: it's actually quite a sinister song, believe me! These last two songs were the only studio offerings with Paul Brookes on drums, and it's fair to say that he does a commendable job.

Opening disk two, the two more well-known songs from Scarab: "Poltergeist" and "Hell on Wheels", from their 1984 single, of course. I haven't heard both songs for a while, but my opinion stays pretty much the same: the A-side is undoubtedly a good song, but slightly lacks direction, while the latter is a cracking effort with great riffing and an awesome chorus. After that, we are gifted with four live recordings made in Birmingham, UK sometime in 1985. The sound quality is decent, and they seem to have been a strong proposition on stage. It was a later stage in their career, and it's clear for all to hear that they were more than ready for greater things at the time - as all four songs are truly excellent efforts, played with great confidence and enthusiasm. "Prisoners" is also recorded live, but at another gig from 1985, at the Tamworth Art Center. The quality is perceivably poorer and (although the song itself shows genuine potential) the listening experience turns out to be quite disappointing, mostly because of the dreadful singalong moment - something that may work out fine when you're at the actual live experience, but always sound unconvincing when in an album (it never convinces ME, you know). Considering the crowd noises, it seems that maybe a dozen chaps had a great time that night, but I would really had prefered to hear a proper studio recording of such a promising song, you know. The last two songs are "Hell Hotel" and "Dead On My Feet", recorded in 1982 for that never-released single. It would have been a nice collectable, that's for sure - as both songs, although not as mature and well-crafted as later efforts would be, are intense heavy-rockers more than suitable for a good headbang, and Andy Lewis' singing is very acceptable too.

All things considered, Scarab was a good band with some interesting songs under their belts, so it's somewhat unfortunate that they couldn't resist the half of the 80's, a period when trends changed in British music and that came to be the kiss of death for so many bands. Paul Britton kept himself considerably busy, though, recording an album's worth of material under the name Trappazat around the turn of the 90's and joining bands such as Jameson Raid and Solstice. Today, he is supposedly working on a solo album. The legacy of Scarab may not be the most groundbreaking stuff even pressed on CD, but it's good old Heavy Metal from the days they did it best, and there's far enough good music here to justify your investment in a copy. 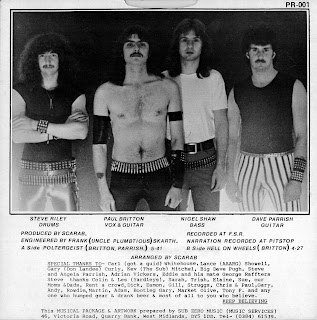 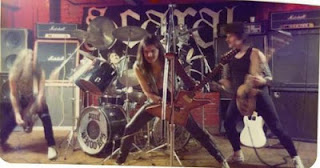 Have you been involved with any of the bands mentioned here? Have any extra info and/or corrections? Please e-mail me at drequon@gmail.com and let me know!
Postado por Drequon às 16:24