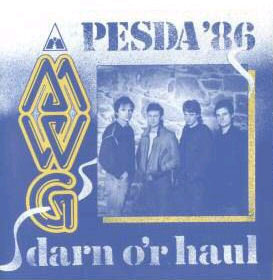 After listening  to this 7" from Welsh-singing band Mwg for the first (and possibly only) time, I can't help but wonder why in hell some hopelessly deluded (or delusional) individuals labelled it as a NWOBHM collectable. I remember first seeing it on Rockdetector (now MusicMight), in a entry filled with a minimal ammount of information - the front cover of this "Pesda '86" single, the year of release (1986, of course) and the tag NWOBHM. Other sources seem to have taken this vague description as legitimate, considering this 7" to be a NWOBHMish-enough record and even incluiding it in some want lists out there. Such an effort, my friends, and it was all in vain - as it isn't even "heavy", let alone a NWOBHM collectable at any sense.

Oh well, we kinda could see it coming, to be honest. Look at the front cover: no archetypal headbangers there, right? To be honest, I never really thought Mwg (translates as "Smoke", by the way) would give me Heavy Metal when I finally had the chance to listen to their single, but I would never expect it to be THAT soft. Actually, both "Pesda '86" (which seems to be a re-recording, considering its title) and "Darn O'r Haul" are inconsistent ballads, covered in such a huge wall of keyboards and harmonised vocals that the whole listening experience was near-torture to my ears. OK, maybe the disappointment made me overreact, but I must be honest and say that (sorry, guys) I didn't like it at all. To be fair, you can listen to a few guitar chords on "Pesda '86", although they are as heavy as cambric paper, the song as a whole being utterly disposable for the average Heavy Metal fan. "Darn O'r Haul" is slighty better than its predecessor - the chorus is OK, I suppose, considering you like ultra-pop, keyboard-oriented ballads from the 80s. It seems to have been a minor hit in Welsh-language charts, incidentally, as it appears on a few best-of compilations from Sain.

It's difficult to determine the musicians who took part on this (to my ears) little waste of vinyl. There's not much info on this group, apart from being from the city of Bethesda and for supposedly have featured at some stage the talents of Huw Smith, the same musician from Maffia Mr. Huws and Llwybr Cyhoeddus, among others. I came to learn in recent years that also drummer Graham Land (who lent a stick to other Welsh-language obscurities such as Omega, Rhiannon Tomos A'r Band and Rohan) took a part in Mwg in the dim and distant past. Still, I have no idea if these guys actually played on this single, and any answers on this subject will have to wait for further clarification. Maybe someone out there actually have a copy of this 7", assuming its picture sleeve actually presents some enlightening info about the band?

As a final piece in the (still very incomplete) puzzle named Mwg, there's a video on YouTube showing the lads in a live performance of a song called "Dreifio". It's not Heavy Metal in the strict sense of the word, but it's indeed a heavy rocker which would justify the (still misleading) NWOBHM tag I found on Rockdetector so many years ago. Too bad their vinyl legacy is so boring - and, considering this final number, entirely unrepresentative.