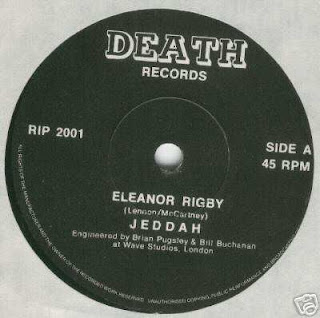 The wonderful world of NWOBHM is very fertile in surprises. Some, admitedly, are not exactly exciting - as some groups labelled to be undiscovered masterpieces turn out to be, at least to my humble ears, nothing of the sort. Sometimes, on the other hand, the lack of expectations are rewarded with genuinely outstanding pieces of nearly-unknown music. Jeddah's 7" single from 1983 is a prime example. Released on the private Death Records, this little slice of vinyl presents "Eleanor Rigby" (yes, from The Beatles) and "Ghosts" - both extremely enjoyable pieces of heavy music.

Jeddah was born from the efforts of Dave Cooke (G) and Ron Emms (B), both members of Strategy, a seemingly studio-only venture that released two instrumental songs as a single in 1982. I'm not entirely sure, but it seems to me that Jeddah was a direct offshot from Strategy - possibly assembled together basically to record the two tracks of this single, as a way to test the water and see how their innovative approach to Metal would be received. The 7" was issued without a picture sleeve, but with a insert folder full of supposedly funny and not-very-realistic remarks about the band. It says, for instance, that the band have two drummers, selected from no less than 500 candidates, and both are "too shy" to be photographed, thus not appearing on the insert. The real story seems to be different: Paul Cooke (not sure if he's related to Dave Cooke or even the man himself under a soubriquet) played drums on a number and Ron Emms (or El Sid, the way he was credited as bass player) did it on the other, the band later creating this tale of absurdity to justify the absence of a dedicated sticksman. 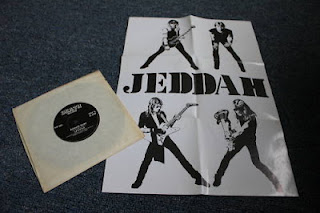 Of course, covering The Beatles is not the most original move to be made by any band. There's a lot of reworked Beatles songs on the NWOBHM metaphorical jukebox - Ethel the Frog, for example, recorded this same "Eleanor Rigby" on its eponymous debut album. But I dare to say Jeddah not only did a very fine job, but also one of the best Beatles reworkings I ever heard from a Heavy Metal band. Don't expect anything near the melancholy of the original version; what we have here is a song pulsing with pure energy, carried along by intense riffing, showcasing confident tempo changes and a memorable vocal performance. More than just playing a well-known song with loud guitars, Jeddah completely reinvented it, with impressive results. Really, really god job, lads.

The flipside is just as good, actually - and very imaginative too. "Ghosts (Never Leave You Behind)" sounds to me like an usual mixing of metal and pop rock music - the basslines, yet simple, are very catchy and near danceable, not a million miles away from Bee Gees (honestly), and the guitars serve mostly to add harmonies and textures rather than anything more metallic, apart from the heavy chords at the chorus. The vocals of Dean Salonga are victorious once again, delivered with great skill and enthusiasm. And the "never leave you behind, never leave you" chorus seriously sticks into your mind, believe me. On untalented hands, we would have a disaster scenario going on here - instead, "Ghosts" are a immensely enjoyable piece of music which more than deserves a listen (many, actually). 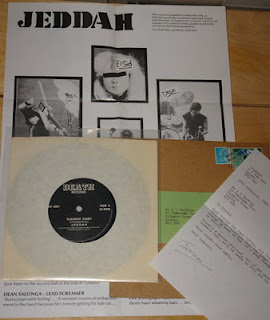 Unfortunately, this great 7" was the sole claim to stardom from Jeddah, and the band seems to have been a very brief proposition, with no other known recordings at any stage. Guitarist Dave Cooke was the one who kept more busy after Jeddah was history, playing with two equally-innovative acts (namely New England / N.E.U.K. and Adrenaline Kick) in the 90s. Drummer Paul Cooke (or at least someone with the same name) was involved with Vandamne for a while, and Ron Emms went to join forces with ex-Persian Risk/Wrathchild guitaris Phil Vokins in a venture called English Rogues. Gifted singer Dean Salonga seemingly vanished from metal scene, which is unfortunate as I really liked his efforts here. Good to know most of these guys kept themselves busy, though, as their talents are more than apparent on Jeddah's single - a record you would do very well in adding to your collection, if you ever have the chance to do it at a reasonable expense.