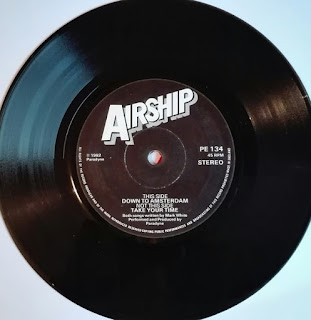 Once a truly elusive curiosity in the NWOBHM universe, Paradyne had become less of an obscurity in recent years - not that every single detail of their history had been made available, you see, but at least I'm able to tell a few interesting and/or meaningful things about them, which is always a good thing I guess. Hailing from the West Sussex of England (more specifically from the city of Chichester), the group seems to have gravitated together in the final part of the 1970s, and it seems to have been a somewhat successful live act in their geographical area, with some well-humored tales about their drum stage made out of bed frames and all that. How's that for DIY spirit, eh? Less-than-professional stage solutions aside, it's obvious that their collective abilities were more than respectable, and local Airship label didn't waste much time before offering the band the chance to lay down two tracks for a 7'' single, released sometime in 1982.

Both tracks here featured were written by mainman Mark White (V/G), and it seems he was helped by accomplices Paul White (G, a relative perhaps?), John Biddiscombe (B) and Gary Halls (D) during most of the band's lifespan, which most probably includes this recording session. I must say that Mark White isn't exactly the most proficient singer you'll ever hear in your life, but he had a fair bit of potential as a songwriter, and NWOBHM addicts will surely have a good enough return for their money - and hold no illusions, you'll hardly find this one in the bargain bin of your local record store.

"Down to Amsterdan", apparently the main focus of interest here, is you typical mid-paced NWOBHM ditty, that kind of tune that can't be disliked without a great deal of grumpiness, but still not strong enough to really stand out in the crowd. It's quite a long track too, and it could easily be 2 minutes shorter without losing anything too important in the process. The sedated instrumental section halfway through is a nice touch, though it goes along a little longer than it probably should. And Mr. White's voice reminds me of someone... Oh yeah, Ethel the Frog's Doug Sheppard that is! I'm glad I finally made the connection. Flipside "Take Your Time" is a bit more restrained than it could be perhaps, but with very substantial guitar work and a fairly intense solo. The song structure gets slightly surprising towards the end, and it's the exact twist it needed to keep the listener's attention all the way through. Not a classic by any stretch, but surely the better of the pair, and enjoyable enough to warrant a few careful listens from time to time. 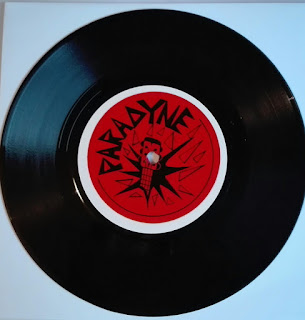 Curiously, there are two variations for the single (no copies ever issued with a picture sleeve), with alternate white or red labels on the B-side, both presenting an illustration with the band's logo and a guitar neck breaking through a glass mirror or something. The red variation is way less common than the white one, but I don't think any of you should lose any sleep over this, as even the 'standard' version is quite rare and a truly good find for any dedicated collector. As for Paradyne, it seems the outfit didn't last for too long after making their vinyl debut, disbanding in 1983 or thereabouts. I'm not sure what happened really, though I suppose it's the typical case of a band that naturally ran its course rather than anything more tragic and/or sinister. If you happen to know more (or if you once had some role in Paradyne's fortunes, who knows), I would wholeheartedly enjoy getting in touch with you, as I really have fun listening to the music and I'm sure many readers would love to learn some extra facts about the band.

Million thanks to Discogs for label scans!

Have you been involved with any of the bands mentioned here? Have any extra info and/or corrections? Please e-mail me (drequon@gmail.com) and let me know!
02.
Postado por Drequon às 19:51