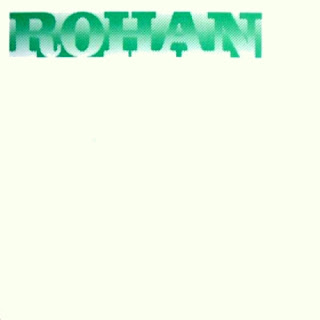 From the many mystery rock combos that adopted the Welsh-language lyrics in the early '80s, Rohan was perhaps one of the least mysterious, if you know what I mean. Though often associated with the NWOBHM fraternity, it was clear almost from the start that it wasn't really the case, this Bangor band being much more attuned to the prog rock revival that was going on in the UK pretty much at the same time. Their main discography was also well established from the start, and the band members are far from nonentities in the Welsh scene, so we always had a good enough deal of info to work with. Still, there's always new facts to be discovered, and it's fair to say we now have a far better knowledge about Rohan's history than we had, say, 10 years ago, with many details only recently being revealed.

In fact, it transpires that Rohan was something of a continuation from a '70s prog rock band named Children, with three of its members - namely Charlie Goodall (V/G), Bev Jones (B) and Dave Evans (K) - once taking part on this previous outfit. It seems Children never released any studio material under their original moniker (I couldn't find any reference to such sessions, at least), but it doesn't mean Mr. Goodall was a stranger to recording studios, as he was also a member of the well-regarded Pererin, one of the very first combos to build the bridge between Welsh folk music and electrical, rock-influenced instrumentation. I'm not 100% sure of the timeline here, but it's reasonable to presume that, after contributing to Pererin's "Haul Ar Y Eira" (1980) and "Teithgan" (1981), the talented musician just felt it was time to move on to pastures new, getting in touch with some old fellows from Children in order to form a new proposition. With Owen Hughes handling the drumsticks, and with the help of Fran Lock on rhythm guitar, Rohan was finally born, most probably sometime in 1982.

There are a few hints around about a very early apparition of Rohan in a cassette-only compilation named "Just When You Thought We Were Dead - Music from the Bangor Area" (1983), with a song called "Celtica". It's probably true, but I wasn't able to independently confirm it just yet, as this compilation seems truly difficult to locate (if you happen to have it, or are at least able to fill the blanks, you're more than welcome to get in touch). Whatever the story, it's safe to assume that the band's first fully official release was the "Mil O Fastiau / Rasus T.T." 7'', issued by the ever-dependable Recordiau Sain sometime in 1984. 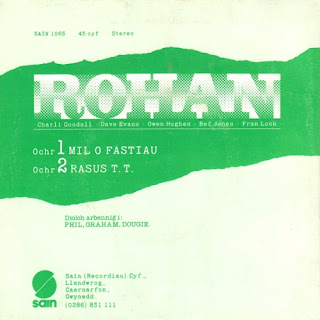 Far from being a mere curiosity without much musical substance to it, Rohan is actually a very good band and, dare I say, quite original in places. There's nothing immensely inventive on "Mil o Fastiau", for instance, but the way this track seamlessly unite the typical keyboard-laden neo-prog ambiences with a straightforward, almost punk/new wave rhythm section is quite charming, and the vocal melody, albeit very simple, will stick to your mind for quite a while. The production is anything but heavy, and it's difficult to imagine any die-hard metalheads throwing shapes while giving this one a spin, but I for one like this tune quite a lot, and I strongly think it ranks among the best Welsh-language rock offerings of the period. "Rasus T.T.", the B side of this single, is not in the same league though: an instrumental cut that doesn't really go anywhere I'm afraid, being far from truly objectionable, but also instantly forgettable as soon as the turntable stops spinning.

Unfortunately, the whole Welsh-language rock/pop scene of the early '80s fizzled out in the second half of the decade, and most of those groups disbanded long before the decade was over. To Rohan, it was no different, and the once well-regarded band quietly drifted towards oblivion in the following years. Surprisingly, it wasn't the end of the story just yet: after a full decade of inactivity and seemingly out of the blue, the original trio of Goodall/Jones/Evans decided it was about time to give the old Rohan compositions a proper recording after all, and recruited much-traveled drummer Graham 'La' Land (formely with Rhiannon Tomos A'r Band, Omega, Louis A'r Rocyrs, Geraint Griffiths and so on) to complete the line-up. The four-piece soon laid down the tracks for an eponymous mini-album, released via Recordiau Arwen in 1996 and consistently kept available on a handful of online CD shops ever since. Actually, I'm not sure it ever received a proper pressing, as all copies to my knowledge are CD-Rs, most probably made on demand.

Everything starts with an expanded, slightly heavier (and better) version of "Mil o Fastiau", here augmented with a "Dau" - this word means "Two", so I guess it's the way they found to make clear it's a re-recording. The guitar arrangements are far more interesting too, with some very engaging solos going on. "Cymylau'n Hedfan" is another truly pleasant, complex number, with a somewhat contemplative mood that still allows space for some forceful arrangements in places, most of all in its dynamic solo section. "Wyt Ti'n Barod" is the closest to heavy metal we get around here, with noisy guitar arrangements and some definitely strong, atmospheric drumming. Still, the vocal lines are a bit too generic for its own good, leaving something to be desired and preventing this otherwise pretty cool song from being the mini-album's highlight. 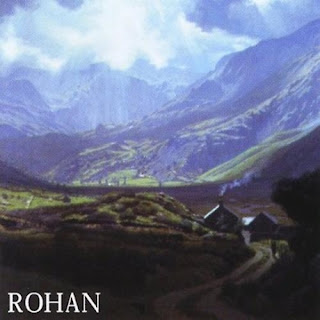 Next comes "Atgofion", a typical neo-prog instrumental piece that won't win any prizes for originality, but keeps the flow of the record when heard as part of the CD's running order. Along with following number, "Lleislau'n Y Gwynt" it's the one most prominently carried along by the keyboards - and the latter also deserves a mention due to the fact it is the only number to ostensibly present something resembling a chorus, a feature Rohan seems to be peculiarly uncomfortable with, for God knows what reason. A good enough song, but "Brwydr Helm's Deep" is way better, easily the best instrumental track Rohan ever penned (yeah, no vocals on this one too). It's a highly interesting tune that starts with some movie-score-influenced, violin-like arrangements before launching into a atmospheric-yet-intense vibe that works very well if you ask me, closing proceedings in reasonably grandiose terms. All in all, a very good release, more than worthy of a careful listen from any heavy/rock enthusiast.

I'm not sure of how long Rohan kept things going with this particular incarnation, or if they actually performed any gigs to promote the release. But it wasn't a long-term commitment for any of those involved, by the looks of things, and Graham Land soon got back to his usual works as a producer/session musician, with a career that goes on to this day. Charlie Goodall also kept firmly involved with music, recording a couple albums with the Celtic rock band Coast and releasing (with the help of Danish female singer Therese Harris Buus Nielsen) a solo album named "Seascapes" in as late as 2015.

Dave Evans joined the reformed version of a late-'60s folk band named Y Cyffro, and also recorded a (reportedly fairly heavy) EP with an outfit named Niwed in 2002. I don't know exactly what Bev Jones was doing musically until recently, but I'm glad to say he teamed up again with former Rohan guitarist Fran Lock in a pop/rock studio project called Seventy Per Cent Water (I really liked the name BTW), that are consistently putting out some original compositions in download-friendly form. Incidentally, most of post-Rohan releases from the ex-members were issued by the same Recordiau Arwen, which tends to suggest 1) the venture was something created solely (or mostly) to spread their music to the world 2) the final disbanding of Rohan was most probably an amicable one, all musicians agreeing that the project had naturally run its course and keeping some sort of connection ever since. I really enjoyed the music anyway, lads, and if you ever decide to plug in again as Rohan in the future, please make sure to let us know, will you?

Have you been involved with any of the bands mentioned here? Have any extra info and/or corrections? Please e-mail me (drequon@gmail.com) and let me know!
Postado por Drequon às 07:04