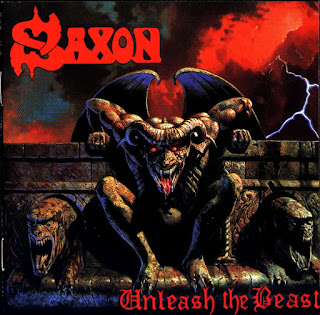 I wasn't there, you know, but I have the distinct feeling the recording sessions for "Unleash the Beast" marked the most relaxing times Saxon had in the studio for quite a while. The stormy days were far behind at last, and everything was going well with the band at the time. Previous album "Dogs of War" was laured by fans and critics as an impressive return to form, the ensuing tour was quite a well-attended (and therefore lucrative) one, and the NWOBHM survivors were in the receiving end of a fair bit of widespread recognition at last, being increasingly regarded by pretty much everyone in the scene as reliable flamebearers on all things Heavy Metal. New soldier Doug Scarratt had little (if any) difficulty to fit in too, and all the tensions created during the dramatic break-up with original guitarist Graham Oliver seemed a thing of the past too - it would eventually resurface in quite nasty terms a couple years later, you see, but let's not touch the subject just yet, as it's better suited for upcoming reviews. And CMC International (later to take new shape as Sanctuary Music) declared interest in distributing the band's new opus, a much-welcome backing that allowed them to book some USA dates once again, the first jaunt to the country in nearly a full decade. Yeah, Saxon were doing just fine in the late 1990s - and tell me, who can blame them for getting a bit carried away?

I wouldn't go as far as to say that "Unleash the Beast" suffers due to a presumable lack of focus, but it's clear for all to hear that it's a less engaging and powerful album than its predecessor. I wouldn't call it faceless too: actually, there's something of a distinct personality lurking beneath the grooves, with some dark leanings in both lyrics and instrumentation that were quite uncommon for Saxon up to that point. But it's mostly underdeveloped really, and the final product sounds mostly without a direction as a result, with frequent distractions stealing much of the album's potential thunder.

Let's take the title track as an example. After an anodyne intro, the first proper song on the CD takes off in pretty interesting terms, with a hard-hitting vibe that is a direct descendant from the glorious early 1980's, as well as a slightly atmospheric, memorable chorus. Nothing new really, but definitely well done and perfectly enjoyable, exactly what one would expect from these long-serving metal merchants. But I still struggle to come to terms with the final section of this tune, a musical detour that sounds totally disposable and sewn together with the rest at very short notice. It doesn't go anywhere really, fading out without ever threating to make sense, and this ill-conceived outro turns out to be quite detrimental to the overall effect of the song, which is a shame if you ask me.

This lack of cohesion (or inspiration) is equally present on many other songs around here. "Terminal Velocity", for instance, doesn't really deliver the promise of its title, being a hard-rocking bike anthem that is pleasant enough, but far from groundbreaking if you ask me. Tracks like "The Preacher" and "The Thin Red Line" are mildly interesting, but not much else, and ballad "Absent Friends" is simply not in the same league of, say, "Iron Wheels" or "Refugee" (and the over-simplistic chorus is quite a letdown too). "Cut Out the Disease" has its moments (most of all in the heavy-as-hell, almost sludgy guitar work), but its structure is quite confusing as a whole, with mellower parts coming and going without much of an outline to justify such oscillations.

Not all is lost, though. "Circle of Light" (nice main riff and pretty effective vocal lines) and "Ministry of Fools" (highly melodic) are more than capable inclusions to the band's ever-expanding repertoire, working quite well  without ever getting too complicated in the process. Similarly, I can't see anyone ever listing "Bloodletter" as a classic, but it's an enthusiastic tune full of good metallic intentions, and I'm sure there's enough in it to justify a healthy dose of headbanging. "All Hell Breaking Loose" moves perilously close to self-parody in places, but I happen to like this tune's uplifting nature, so I'd say it closes proceedings in a mostly good manner. And the presence of good riffs aplenty (even when put to use in less-than-memorable songs) was a healthy sign when it comes to Doug Scarratt's creative input, showing that he was more than capable to help the band's cause in no small terms. 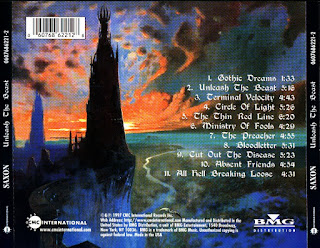 "Unleash the Beast" is hardly a highlight in Saxon's career, but let's not be too harsh on them: some albums are simply better than others, and one can't honestly expect a band to hit the nail right on the head every single time. It may not have been the further move towards world domination some perhaps would expect, but it was no step backwards either, and the developments ignited by this particular release sure helped the band's cause in the long run. You don't really need it if you're not an ardent fan, but it's not like you should avoid it at all costs too - I do own a copy myself, for instance, and I even give it a few spins from time to time. Don't be afraid to give it a chance if you find it for sale at a reasonable price.

Have you been involved with any of the bands here mentioned? Have any extra info and/or corrections? Please e-mail me (drequon@gmail.com) and let me know!
Postado por Drequon às 18:03