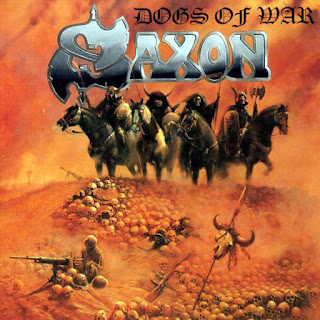 Yesterday's gone, you know. That's a concept that can be very useful for all of us, in pretty much every aspect of our lives: no matter how dreadful or sublime the events of the past turned out to be, there's nothing you can do about it anymore, and the best option will always be focusing on today, right now, when everything's still to be decided. It's a very important stepping stone for a number of philosophies, and I guess it's not entirely incidental that Saxon chose to finish this "Dogs of War" album with a track named (yeah, you guessed it) "Yesterday's Gone", as this excellent record is truly a milestone in the band's career. In it, the long road to redemption after a few disasters in the mid-to-late 1980's is finally fulfilled with great aplomb, and even the most cynical listener wouldn't be able to deny the overwhelming fact that Saxon were back, and this time it was for good. OK, I know the song itself is not about personal and/or collective redemption (it's about a guy telling his ex to fuck off, basically), but the metaphor, even arguably unintentional, is too compelling to be ignore: stop whining about the past, we'll no longer ask for forgiveness, we're back to metal and you better beware, 'cause we're out to kick your ass. Yesterday's gone.

Curiously, it was a very unstable moment for the lads from Barnsley, culminating with long-serving guitarist Graham Oliver resigning (or being fired, depending on who you choose to believe) right after recording sessions were completed. It seems that Biff Byford did not take lightly that Oliver was selling copies of the legendary 1980 performance at Donnington without the other guys' consent (unsurprisingly, some less-than-respectable labels have been repackaging the tapes in a number of not-too-legitimate releases for some good 25 years now). If these accusations are accurate, I can only wonder what the hell the man was thinking, but it's hard to be 100% sure about such things, so let's not be too emphatic on that. Whatever the story, Oliver was history even before the album was out, and Doug Scarrat (a longtime friend of Nigel Glockler) stepped in at very short notice, with very little time to do his homework before all promotional and touring commitments began. It was all very complicated, and it would get even nastier in the following years, so it's truly remarkable that "Dogs of War" turned out to be such a kickass album, as the circumstances surrounding it were less than ideal, to say the least.

There's not a huge deal of difference here from what Saxon had already done on "Solid Ball of Rock" and "Forever Free" a few years previously: it's not like they set a whole new bonfire burning, you see, but more like a fire they were rekindling for a while and then, all of a sudden, stars burning brighter than anyone could have foreseen. In a nutshell, it's pretty much the same, only way, way better. The title track kick things off with a killer opening riff and a scream-your-lungs-out, raise-your-fist-in-the-air chorus. After years of half-baked, totally forgettable tunes, it's a balm to hear Saxon opening proceedings with an instant classic, and this insanely good song set the mood nicely for what is coming next.

The songwriting is top notch. Less typical songs like the surprisingly convoluted "Demolition Alley" and the truly amazing "Don't Worry" (one of the most inventive and engaging songs from the band's entire catalogue IMO) are perfectly paired with more predictable, but equally effective numbers such as "Big Twin Rolling (Coming Home)" and "Burning Wheels". Even when the more accesible element of their music is displayed, as in "Hold On", it comes with such skill and confidence that all pop metal flops of the late 1980's are not even allowed to come to mind, let alone being taken as a credible pattern for comparison. And there's also "The Great White Buffalo", with an ominous-yet-forceful atmosphere and a riff I'm sure Tony Iommi would be proud to call his own. There's not much to be mentioned in terms of individual performances here, but it's actually a good thing, as the team spirit is the true highlight: there's not a beat that could have been more intense, not a guitar lick loosely put together, every single bit of performance sounds tight and is carried along with confidence and infectious enthusiasm.

Some may argue that this CD loses some steam towards the end, with "Walking Through Tokyo" and "Give it All Away" being something like album fillers when compared with the rest of the package. It's not an absurd notion at all, but it wouldn't be wise to stretch it out of proportion IMO, as "Walking Through Tokyo" is embellished by some interesting arrangements in the chorus and "Give it All Away" works fine in its unpretentious outlook, both being miles away from any serious letdown. And then comes "Yesterday's Gone" to the definitive rescue, with great basslines and a no-fucks-being-given attitude that works for memorable effect. "I've got news for you baby / yesterday's gone", Biff Byford sings, and you better know he means every word of it.

From this point onward, Saxon found a safe niche within the heavy metal universe: maybe not the strongest act around in terms of record sales, but a reliable recording and touring entity nonetheless, always with a competent and reassuring collection of hard-hitting songs to save the day. That's pretty much what everybody ever wanted from these NWOBHM heroes, so it's fair to say that "Dogs of War" was close to a resounding success, even if it never threatened to enter the charts. As earlier mentioned, those were troubled times for Saxon, with a lot of legal wranglings just waiting around the corner, but it is the music that matters, and it's nearly 25 years without any major complaints in this regard. If you love British metal and want to understand how it survived the 1990's, this one is no less than a mandatory listen - and it's also pretty bloody good, so do yourself a favor and get it ASAP.