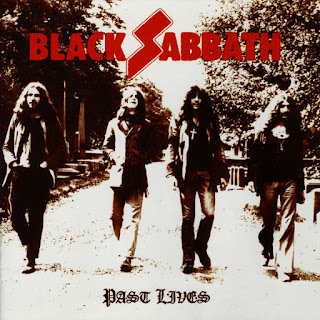 Not a single sane mind on Earth would qualify the original Black Sabbath reunion as a turkey, you know, but I'm afraid it was a mostly disappointing endeavor to be honest, delivering way less than its original promise. Virtually no new music came out of the quartet at first (only the two bonus tracks on the "Reunion" 2-CD package, and both hardly impressive if you ask me), and the band soon became little more than a staple in Ozzfest year after year, something that would be demeaning to the Sabbath name to a great extent. C'mon, these guys are trailblazers of heavy metal as we know it, and one would expect them to return as way more than just a support band for Ozzy Osbourne when he feels like singing old tunes from the past. It wasn't atrocious, see, but many fans felt very frustrated by this state of affairs, including myself. Considering this scenario, "Past Lives" was pretty much a cash-grab, something to keep the ball rolling in between USA tours and not much else, though I can understand that the chance to finally release the old "Live at Last" recordings in a more legitimate package was very tempting for the lads (please kindly read the review in question to see how illegitimate the whole thing was in its original form).

Actually, the first CD from this edition is a remastered version of the "Live at Last" LP, with no changes in the running order and no further additions from the original shows, as all master tapes presumably got lost in the interim. It sounds better, of course, but there's very little to be said about the tracks here featured, the contents being of real significance only for those who still didn't own the original album (or one of its many reissues, for that matter). With that said, the main points of interest will undoubtedly be available on CD 2 - though most of these recordings have already appeared on earlier bootlegs and will hardly shock obsessive collectors in terms of novelty or scarcity.

For those who never bothered to delve too deep into the never-ending unofficial catalogue of Sabbath, though, there's pretty interesting inclusions on disc two, specially the ones captured in New Jersey 1975, during the tour to promote "Sabotage". You'll hardly have another chance to hear contemporary live renditions of songs like "Hole in the Sky" and "Symptom of the Universe", so these inclusions alone are enough to justify the effort to locate a copy - though Ozzy's performance on "Megalomania" is far from top-notch, to an extent that he simply gives up altogether on singing it in key towards the end. Hardly the most enjoyable vocal performance ever captured on digital format if you ask me, but nevermind.

Taken from the fabled performance at the Olympia Theatre in Paris on December 1970 (the earliest good-quality recording of a Sabbath show known to exist), tunes like "Hand of Doom" and "Iron Man" are also of interest, not only for its historic value, but also for presenting considerably different lyrics from the canonical album versions. Maybe it was only Ozzy botching it, you know, but I kinda doubt it, as he seems mostly very confident and steady while doing so. Who knows? Whatever the story, all recordings are mostly good enough - the rough edges in it are very prominent, and even some glaring sound fluctuations are perceivable in places, but these are recordings from a time when high-quality equipment was not easily available (not to mention very expensive), so let's be grateful that these documents for posterity even exist in the first place.

I would not at all be inclined to describe "Past Lives" as a must-buy for the average metal fan, but it gets some extra points for historical relevance, doing just enough to achieve 3-star territory in my book. With that said, this 2-CD package hardly set the world into wild frenzy upon its release, and the lack of relevant input from Black Sabbath got more and more disquieting as years went on. While waiting for Ozzy Osbourne to record a new solo album in 2006, his third in a row while Sabbath was pretty much his side project (I don't want to be too nasty on the man, mind you, I still love him from the bottom of my heart), Tony Iommi and Geezer Butler decided to rejoin forces with old mates Ronnie James Dio and Vinny Appice, at first only to record a few brand-new songs for the upcoming "The Dio Years" compilation. But old habits never die, and soon they would all be adjusting their agendas for tentative recording and rehearsal sessions, an arrangement that soon took shape in a new proposition called Heaven & Hell. Not Black Sabbath in name, but surely in spirit, and some pretty interesting developments took shape from such partnership, as I hope to explain on future instalments of the series.

Have you been involved with any of the bands mentioned here? Have any extra info and/or corrections? Please e-mail me at drequon@gmail.com and let me know!
Postado por Drequon às 15:56