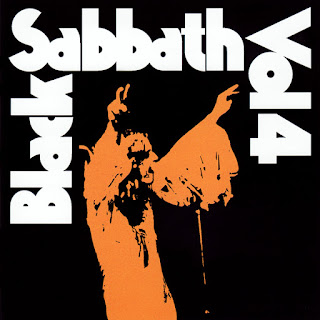 You have to be careful when saying things about a huge legend like Black Sabbath. What sense does it make if I stand right here in front of you people and say "Vol. 4" is a letdown after "Master of Reality", or even that it lacks substance when compared to its three predecessors? To put it bluntly, you have to be some kind of moron to say such things without getting red-faced. Still, it's actually pretty much what I'm about to elaborate upon, so I guess you are all well excused to say very nasty things about me and my sheer lack of taste. Nevertheless, I really believe I do have a point, so please give me at least the courtesy of a full reading before kicking my ass - especially since I'm nowhere near about to write a scathing review, simply because "Vol. 4" is obviously a great album and a everlasting milestone of heavy metal. It's just that, historically speaking, it brings some new elements to the table - and such changes (no pun intended) would evolve in a way that sort of undermined Black Sabbath's efforts in the long run.

Let me start with a non-controversial statement: Black Sabbath was obviously trying to reach a wider audience with "Vol. 4". And not only in terms of musical taste, but also geographically speaking, as they were rapidly becoming superstars in the USA. Nothing wrong about any of that, of course - when you're getting big, it's only natural that you would want to get even bigger. The four lads from Birmingham tried to achieve this by (consciously or not) adopting a way less bleak, more varied and even slightly uplifting approach to their compositions, attuned with the psychedelia-tinged prog rock that was the flavour of the month back in 1972. It's almost like, after toying with all things somber, they just wanted to shed some light and good humour upon themselves and their music. While it's not a bad thing in itself, it sacrifices one of the band's most impressive features: the riffs. Tony Iommi clearly tries to expand as a musician, with lots of acoustic parts and a fair deal of nice, well crafted solos - but listen carefully and you'll sure miss the bombastic, almost theatrical guitar presence that always was (and would be) a huge part of the band's impact. "Cornucopia", for example, opens with a great promising riff, but soon metamorphoses into something way more upbeat and full of experimentation - not bad, but slightly unfocused if we're to be honest.

"Wheels of Confusion/The Straightener" is perhaps the finest moment here, embracing the progressive rock emergence and expertly bringing it to their own sound, on their own terms. Clocking on over eight minutes, it's also a bold choice for an opener (not that "War Pigs" was a safe bet, you know), which comes to show they were miles away from any serious sellout. "Tomorrow's Dream" is also great, but things get quite bumpy from this point onwards. "Changes" is perhaps the song that more clearly represents the dangers on the road ahead: let's face it, it's a damn boring mellotron ballad that seems to drag on for like 200 years and with no redeeming features at all. The lyrics are brain-dead breakup nonsense, and the whole song takes what was good on "Solitude" (from "Master of Reality") and fluffs it beyond belief. I see, they wanted a hit single for the USA, but I'm damn sure they could have done better. "FX" and "Laguna Sunrise" are the instrumental fillers here, and both are actually pretty bad too, as they basically serve no purpose whatsoever. If earlier interludes like "Orchid" and "Embryo" were nice moodsetters for what was to come, on "Vol. 4" they are just wasting our time before the next track, both pieces being instantly forgettable as a result. And I don't think that's anything despicable about "St. Vitus Dance", but you sure deserve a place into Black Sabbath Fans' Hall of Fame if you think it holds its own against pretty much anything they did prior to 1972.

But fear not, of course. There are more than enough jewels around here, such as "Supernaut" (with a Tony-Iommi-meets-Jimi-Hendrix guitar that works beautifully), "Snowblind" (perhaps the only truly obscure track here, with a strong, muscular performance from all four musicians) and "Under the Sun", that closes proceedings with another nice prog rock song structure that only enhances Sabbath's usual rifferama. There's no doubt any Sabbath fan (we all are, I guess) will find many things to enjoy on "Vol. 4" - some may even consider it to be one of the best albums they ever crafted, why not? But I must say (and I'm already feeling a bit stupid by saying it, but there you go) that it shows a band starting to veer away from what they do best - and though they would surely hit the nail on the head countless times after that, it was no longer like they could do no wrong. And it means something when you are a legend, as they already were.

Have you been involved with any of the bands mentioned here? Have any extra info and/or corrections? Please e-mail me at drequon@gmail.com and let me know!
Postado por Drequon às 17:33