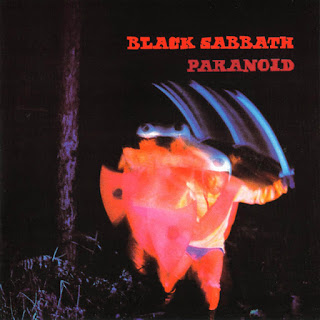 All the promises were made in unequivocal terms on Black Sabbath's debut LP, but they were still to take the final step from Cream-obsessed, hard-rocking tunes to something completely new and exhilarating - and Satan knows that Osbourne, Iommi, Butler and Ward were the ones who could do it, more than anyone else in the whole damn world. It's truly remarkable that it took them little more than half a year to make it real. "Paranoid" is so immense a triumph that it defies proper description, one of the very few albums that will be heard through the centuries, a record so huge that you can hardly imagine modern music without it - it's not only heavy metal, it actually changed everything.

Before this LP hit the shops, there was no heavy metal as such; with its arrival, heavy metal was destined to be perennial. In a sense, everything after "Paranoid" is a long and mostly pleasant exercise in futility: it is the most important heavy metal album of all time, eternally unbeatable and never to be matched. You can only do it once, you know. I mean, is there any way an opening number can beat "War Pigs" in terms of bombastic, near-hypnotic wickedness and bite? Can any other song ever scare the shit out of you like Tony Iommi's inhuman riffs and Ozzy Osbourne's ominous singing about a war to kill us all did? And does anyone have any hopes of replicating that final guitar harmony, perhaps the most perfect heavy metal sequence ever commited to tape (and I mean it)? It was done by Black Sabbath, it all happened through "War Pigs", and now we can only try our best to live our lives.

The aforementioned track is perhaps the pinnacle of this LP (and the best heavy metal song ever written, as a consequence), but "Paranoid" still have plenty of genius to offer after its supreme masterpiece is over. "Paranoid" (the song) is another killer of a track, with a main riff that single-handedly created headbanging, while "Electric Funeral" was doom metal more than a decade before anyone would come out with such a concept. "Iron Man", not to mention the unparalleled main riff, is perhaps the earliest example of what I would call 'heavy metal storytelling': morbid and/or dramatic lyrics with intense imagery and a narrative you can follow from start to finish, often far from subtle and usually far removed from the typical rock and roll poetry. The subject matter of the entire album deserves a mention BTW, with a tendency towards the dark side of things (war, mental illness, substance abuse and all sorts of disasters) which was virtually unheard of. Even less unmistakeably metallic songs like "Hand of Doom" or "Fairies Wear Boots" are miles away from what anyone did before, its multi-section arrangements and minor-key chord progressions taking things to a whole new level of intensity and musical menace.

The album has an eerie, cathartic atmosphere of its own, and quite curiously it owes much to the band's individual shortcomings: Ozzy Osbourne lacks vocal technique, Geezer Butler and Bill Ward are more than often playing disparate things, Tony Iommi is anything but the typical guitar hero. But together they gelled like nearly no band did before or ever since, and these imperfections actually give "Paranoid" a sense of urgency, like this monster of a statement couldn't wait for them to be more skillful or musically refined. It's no surprise it took a while for critics to acknowledge the album's merits, while people were falling over themselves to get a copy. Naysayers are forever bound to lose here: "Paranoid" will kick their asses time and time again, until the world reach its very end. And all this waits for you behind a pretty pathetic front cover!

Have you been involved with any of the bands mentioned here? Have any extra info and/or corrections? Please e-mail me at drequon@gmail.com and let me know!
Postado por Drequon às 15:59