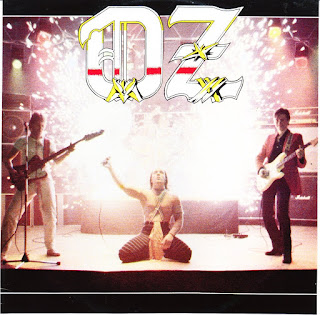 Some bands take a while to fulfill their promises, as I'm sure you all know. I mean, you don't have to go further than Judas Priest or Deep Purple to find some conclusive evidence that the first album may not always be as groundbreaking as we would like it to be. Sometimes things need time to mature. The Finnish underground legend Oz took their first collective steps to stardom (well, sort of) in rather unauspicious terms with "Heavy Metal Heroes" - an LP that sounds even more pale and unsusbstantial compared with the sheer energy of its sucessor, the immensely enjoyable "Fire in the Brain".

They were a pretty different band of course. Kari Elo (G) and Tauno Vajavaara (B) are competent enough, but both seem to be far away from home in a heavy metal essemble, if you know what I mean. Come on, just take a look at the original front cover and you'll see some seriously non-metallic looks there. They never sound heavy, their contributions never bring any real dynamics to the table, and their lack of enthusiasm is contagious for all the wrong reasons. Pekka Mark (D) keep the beat and not much else, and Eero Hamalainen (or The Oz, his slightly ridiculous stage persona at the time) makes no perceivable effort to liven up such cheerless instrumentation, singing like he's in a boring job and it's only Wednesday afternoon. It was probably a career-saving decision that the latter two became Mark Ruffneck and Ape DiMartini and decided to start things over almost from scratch, as I seriously doubt Oz would ever raise any eyebrows without reinventing themselves as they did.

As for the songs, I think opening track "Hey You" gives a credible warning on what's to come. It's not exactly bad, but how are you supposed to feel electrified when the riffs are played with no heaviness, the singer just mutter the lyrics with zero passion, and the supposedly sing-along chorus is as exhilarating as spending 45 minutes stuck in a traffic jam? It's a particularly frustrating state of affairs, because it's clear for all to hear that the song could fare way better if played with just a little more enthusiasm. You can easily identify NWOBHM as an influence for early Oz, but it's nothing like Raven or Iron Maiden, being way more akin to the hard rocking side of that spectrum - and not a very rapturous one on emulating that, readers take note. A similar verdict can be applied to tunes such as "Capricorn Man", "Second Hand Lady", "Rather Knight", "In the Chains" and so on. There's not a single track that would stick out as particularly bad, but there's no redeeming songs around here either: all we have is a 33-minute ride through tepid, uninteresting semi-metal mediocrity.

That all said, please don't choose this record as an introduction to Oz, as you'll probably dismiss it straight away and risk missing out on at least one excellent album ("Fire in the Brain") and another pretty decent one ("III Warning") by doing so. You wouldn't reccommend anyone to get familiar with Judas Priest by listening to "Rocka Rolla", right? "Heavy Metal Heroes" is one for completists, for those who already love these Finnish maniacs for what they did best and are curious to learn more.

Have you been involved with any of the bands mentioned here? Have any extra info and/or corrections? Please e-mail me at drequon@gmail.com and let me know!
Postado por Drequon às 19:52