Being an amateur NWOBHM researcher may be slightly frustrating sometimes. It's not uncommon that your hard efforts are rewarded with absolutely no success at all, and sometimes suceeding isn't even that good in the end of the day: old "classics" may not be that hot, and old musicians often are not that proud of what they did in the dim and distant past... But believe me when I tell you, sometimes it TOTALLY worth the effort indeed. I have been very lucky recently when it comes to track down members of long gone (but never really forgotten) NWOBHM bands, and I'll do my best to give you some exclusive info in the coming weeks. For starters, please let me drop you a few lines about the mighty Mirage from South Wales - a band that capture people's collective imagination for decades, and an history that I'm really proud to say that is still going strong at this very moment!

Mirage came to existence sometime in 1983, while guitarist Richard Price from West Midlands was doing his time in Cardiff, studying Chemical Engineering at the Polytechnic of Wales. After a minor experience with a youthful band called Nova in the early 80s, Richard Morris wanted to have a band to call his own once again, and a few ads in Cardiff music shops got him in touch with Gerry Turner (D), Richard "Wretch" Morgan (V) and Carl Skinner (B). They chose the name Mirage and became something of a promise almost immediately, although it transpires that they performed no more than a couple of local gigs during the course of their existence. They went as far as to record a handful of original songs, one of those ("Blind Fury") picked up by the tiny Notepad label for inclusion in a humble local-band compilation, called "Notepad Productions Vol. 1" and released in 1984. They also took part in a local Battle of the Bands competition, but Mirage didn't really last the distance in its original form, the project being laid to rest even before the end of the year. 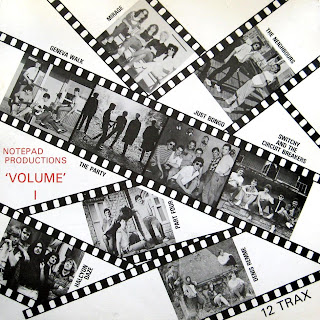 Maybe nobody would really take notice of Mirage's only vinyl appearance if not for our good friend Malc MacMillan and his invaluable NWOBHM Encyclopedia from 2001. MacMillan reviews "Blind Fury" in very enthusiastic terms, describing the track (pretty much the only Metal on display there) as a "superb, catchy, mid paced number with an excellent vocal performance" and "truly one of the classic tracks of the entire NWOBHM genre". You don't need much more than that to spark the imagination of a NWOBHM aficionado - and it was over a decade of wondering about Mirage and "Blind Fury" until I finally get in touch with two of the band members (drummer Gerry Turner and Richard Price on guitar), very nice people who treated me with great kindness and furnished me with info and invaluable music files - incluiding the elusive "Blind Fury", the classic track few people had the chance to hear.

After listening to it several times, I can wholeheartedly tell you that Mr. Malc MacMillan was completely right all along. What a nice song it is! It's a simple, yet extremely catchy mid-tempo heavy rocker which brilliantly captures the energy of a youthful bunch of talented musicians. The vocal lines are excellent (the bridge to the chorus is particularly impressive) and delivered with great talent by Mr. Wretch, whereas the other players completely overshadow the rough edges of the overall performance with massive quantities of sheer (and contagious) enthusiasm. It shows more than simple promise: actually, these guys were GOOD, and they really could (should?) have become a way more popular band under different circumstances. If you're not convinced just yet, you can watch this video, edited by Mr. Price himself (and he was kind enough to mention this humble blogger in it, which I consider to be a huge honor indeed), where "Blind Fury" appears in all its glory. Listen and believe!


As earlier mentioned, Mirage was over at the tail end of 1984, but it wasn't the end of the line for the musicians involved. After a brief spell under the name Blondel, the Price / Morgan / Turner trio relocated to Price's hometown Birmingham and, assisted by Andrew Foster (B/K), reassembled as High Society. They wrote many songs in a more eccletic and experimental vein, the resulting material not being really connected to Heavy Metal, although the songs are mostly very enjoyable. They went as far as to put together a rehearsal studio of their own but, sadly, High Society split up in 1988, before leaving any proper recordings registered for posterity.

Singer Richard Morgan ran the High Society's studio for a few years after the band was history and later joined another band called Electraglyde, even releasing a full CD with them in the early 90s. Gerry Turner is no longer playing drums on a regular basis, but it's still pretty much active when it comes to music, home-recording lots of material in a one-man-band called Temple of Doubt and receiving some deserved airplay on Internet radio stations. Unfortunately, after keeping a very low profile on music for the remainder of his life, Mirage's bassist Carl Skinner passed away a few years ago, the kind of news that I'm always sad to share, really.

Richard Price would join a band called Serene Machine in the early-to-mid 90s, releasing a self-financed CD and performing a lot of gigs, the overall sound of the band being more attuned to bands such as Smashing Pumpkins and Suede. Since 2004, he plays guitar with Love Commandos, a very interesting rock band I would really reccomend you to give a chance to. They already have an album out (called "Siren" and available on iTunes) and a new release is a reasonable prospect in the near future, so it's heartwarming to know that Richard Price's guitar will surely be around for a good number of years to come.

And what about Mirage, you ask me? Well, it's great to say that we actually do have some news to share! Richard Price and Gerry Turner are very much in touch to this day and, after locating a handful of unreleased demos, are strongly considering a vinyl release to call their own. The tentative 7'' single will couple the outstanding "Blind Fury" with "Twilight Zone", a heavier affair with intense riffing and a catchy chorus. Let's hope for it to materialize in the near future, as the world would sure be a better place with a few more Mirage songs around!

Million thanks to Gerry Turner and Richard Price for kindly answering my e-mails and helping me with all the music and info on Mirage. A huge thank you to Mr. Malc MacMillan too, whose indispensable NWOBHM Encyclopedia (and the enthusiastic review to "Blind Fury") kept the flame alive for over a decade, making us all wonder about Mirage and their contribution to British heavy music. I'm a learner and a fan, and I bow to the three of you! :)
Postado por Drequon às 10:56