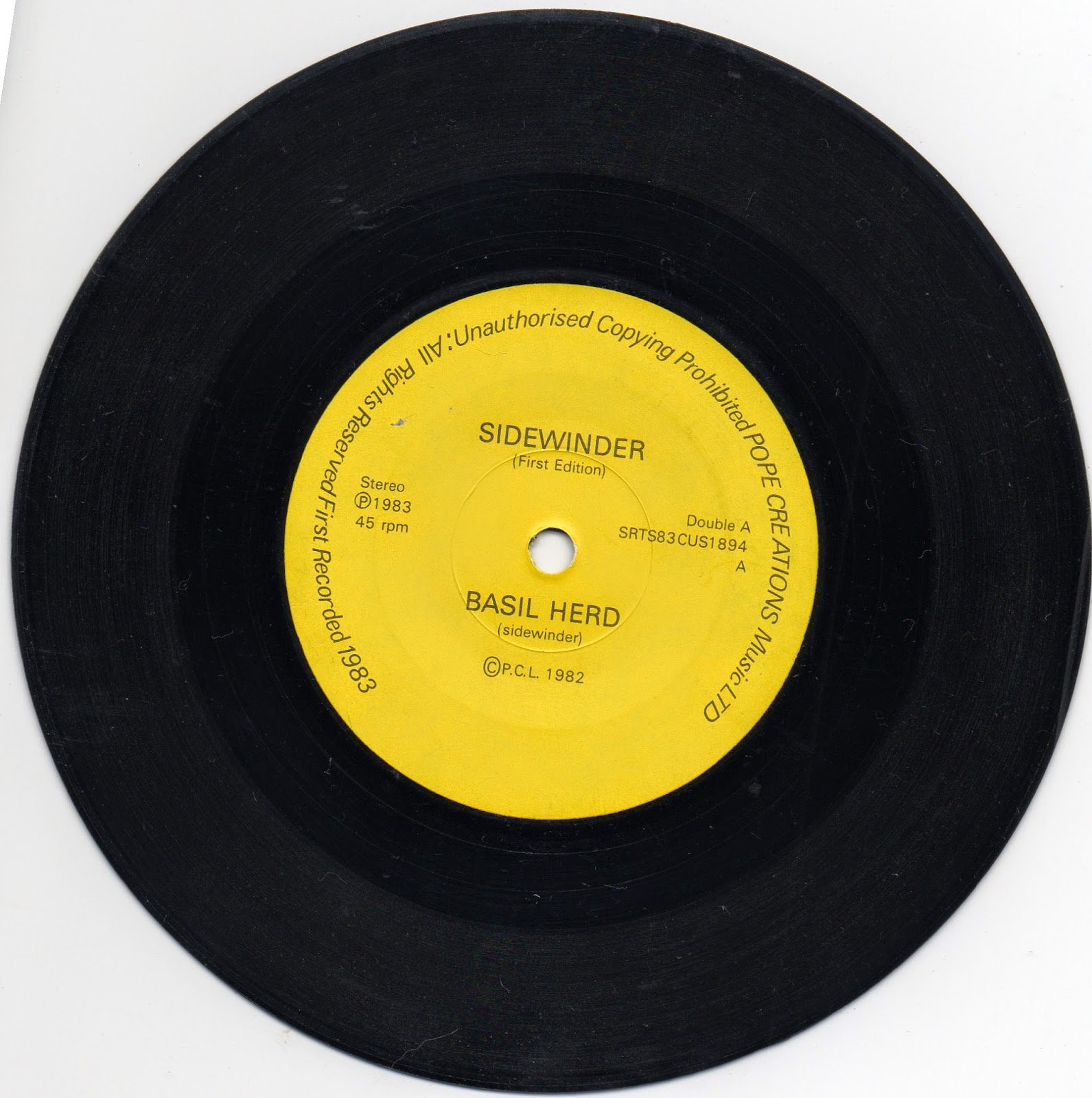 The rise of the NWOBHM collecting scene in the 90s (a ressurgence in interest that is pretty much active to this day) surely had a few side effects, as I'm sure most of you are aware. Some records (even though very good in much cases) were passed out as undiscovered classics of the era while actually being nothing of the sort. In some cases they came out too late (or too early) to fit the NWOBHM timeline, sometimes the bands were not British, and there's a number of cases when the groups in question weren't even trying to be Heavy Metal at all. The immensely obscure Sidewinder, from which precious little is known at present, seems to fit like a glove into the third category. Their one and only vinyl release, a self-financed 7'' from 1983, may be included in many NWOBHM wishlists, but I really don't think any of the musicians involved (whoever they were) ever wore leather jackets and bullet belts, as "Basil Herd" and "The Game" have almost nothing to do with Heavy Metal.

As this is a double A-sided single, I randomly decided to consider "Basil Herd" the main focus of attention around here. It's powerpop with some slightly heavier guitar parts, although the song structure and lyrical subject actually reminds me of some Oi! bands like Cock Sparrer at their "Running Riot in '84" days. The basslines are quite prominent and the song as a whole is reasonably well-crafted and catchy, so it's not like we're being submitted to any sort of atrocity here - I actually kinda like it, to make things clear. But I'm afraid this tune won't appeal to the vast majority of headbangers, being more indicated for those who happen to enjoy the powerpop and indie scenes as well. "The Game" is a tiny bit more intense, with some guitar interplay and a reasonably nice chorus, but still it's firmly rooted in indie/new wave soil, being miles away from anything remotely close to Heavy Metal. If you're desperately looking for NWOBHM comparisons, I would say that Sidewinder reminds me slightly of Blazer Blazer and Urchin - but it's a very tenuous connection really, as they were much closer to Buzzcocks and The Jam than anything more forceful or metallic. Not bad anyway - maybe they could have achieved better things if given some encouragement, as their music doesn't leave that much to be desired for indie rock enthusiasts. 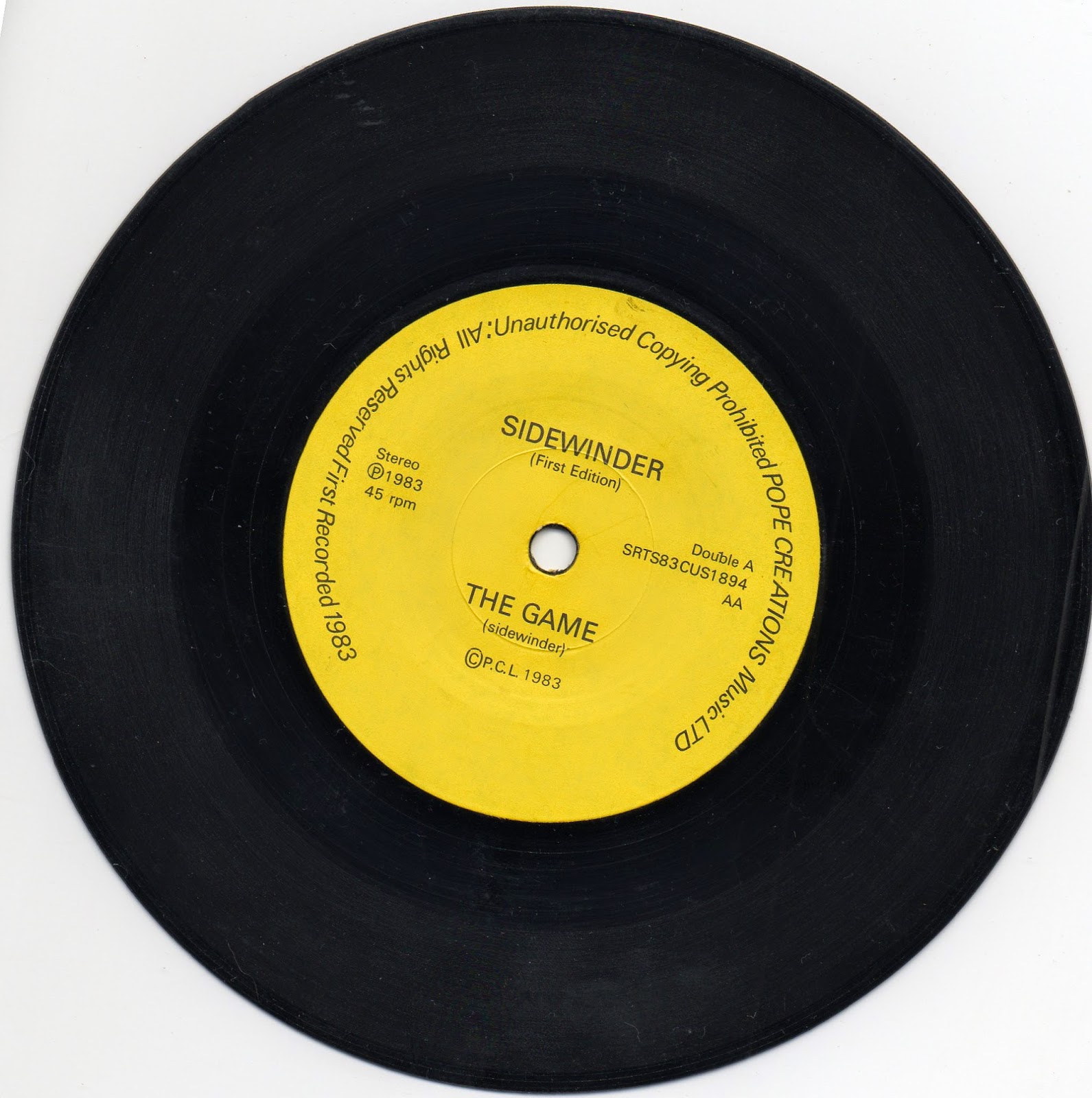 I must admit I have no idea who were involved with Sidewinder - there's precisely zero usable info on the label, no writing credits, no mentions to any recording facility, nothing. I once read somewhere that this particular band came from Yorkshire, but I have no corroboratory info on this, so the lads could be from pretty much anywhere else in the UK. Therefore I'm left with no choice but to ask the kind reader to help me fill the blanks. If you have any reliable info on Sidewinder, even the slightest, please don't be shy and use the e-mail address below to get in touch. I would love to know more about Sidewinder, really.

Have you been involved with any of the bands mentioned here? Have any extra info and/or corrections? Please e-mail me at drequon@gmail.com and let me know!
Postado por Drequon às 18:11