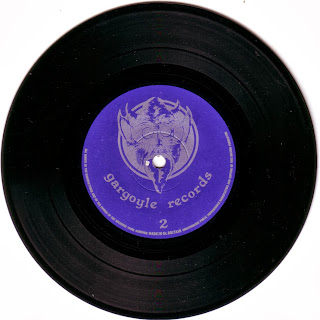 Being a NWOBHM obsessed demands more than a strong appreciation for all things Heavy Metal: it also requires a certain level of tolerance, a broad-minded approach to music, I would say. Many singles now considered to be NWOBHM collectables have not much to do with Heavy Metal at all, being more well suited to fans of progressive rock, indie music, pub rock, post-punk experimentations and so on. In some other cases, there's a fair percentage of Metal to be heard, but you will also get lots of other genres as well - which is perfectly understandable, as many outfits were trying to find a sound to call their own at the time, and there's nothing wrong about that. Most metalheads among you may find Tutch to be a bit too non-Metal for your tastes - but these British heavy rockers managed to release a 7'' EP (way back in 1980) that may be rewarding if you are open to some pinches of prog, alternative rock and Queen-ish flubdubs in your daily ration of music.

Opening song "The Battle" is quite surprising, to be fair: more than a good song, it's actually a very inventive piece of composition. It shows an unpredictable song structure with many twists and turns, and the lyrics are reasonably good as well - enhanced by a really impressive vocal performance, it must be stated. The keyboards, although a bit unusual, help to create the right atmosphere - there's no doubt you're listening to a war song, as there's a perceivable "The Bridge On River Kwai" feeling throughout, if you know what I mean! It sounds funny, even a bit naive, but also quite serious - maybe we could even say "powerful" here, although I suppose most people wouldn't immediately understand my point in using such a word. In the realm of NWOBHM comparisions, it reminds me of Clientelle, but it's not a direct similarity, "The Battle" being quite an unique composition in its own right. It's not a song for all ears, that's for sure, but the more broad-minded among you are likely to enjoy it a hell of a lot - I even get myself humming the melody of this song from time to time, which is not that easy an achievement, you know. I like it, really.

The other two songs in this 7'' are (predictably) not in the same league: both "You Don't Care" and "Round and Round" are not bad at all, but also fail to live up to the promise of the very interesting A-side. Which is not a tragedy, you know. The first song is a slightly interesting (but a bit too melodramatic) ballad with piano and harmonised vocals and all that. The huge influence of Queen is undeniable, and the singer (whoever he is) does a very good job out of it - no Freddie Mercury here, of course, but it's a respectable performance all the same. Not a memorable song as "The Battle", but it shows that Tutch was surely a band with creativity in mind. Finally, "Round and Round" is the more straightforward song of the pack - despite a strange synthetizer sound all along, it's actually a pretty generic heavy rocker like hundreds of NWOBHM done in the period in question. Not really surprising, but nothing to be ashamed of, that's for sure. 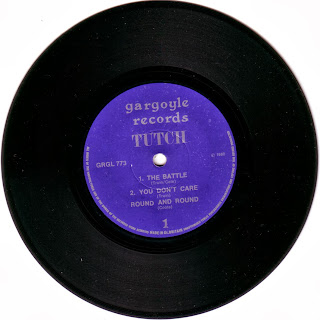 Tutch was a band trying to find their own sound, and they show great signs of promise in the songs here featured. That's actually too bad they didn't last for long, as I think they do a pretty respectable job in their sole 7''. Unfortunately, the Gargoyle label (a somewhat prolific one back in the day) didn't offer them a chance for further releases, and soon Tutch disappeared straight into oblivion - not that they were well-known contenders at any point, mind you. There's no info out there on who took part in Tutch and what they did prior or after this particular release, so if you happen to know anything about them, please don't be shy and get in touch!

Thanks to Heavy Metal Rarities Forum for label scans

Have you been involved with any of the bands mentioned here? Have any extra info and/or corrections? Please e-mail me at drequon@gmail.com and let me know!
Postado por Drequon às 13:53