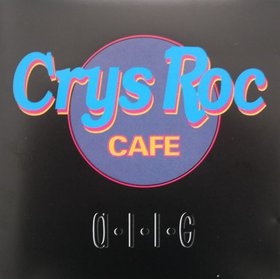 After reaching remarkable success in the Welsh-language music market (a scene that really should be more well-documented, if you ask me) in the first half of the 80s with their "Rhyfelwr" and "Tymor Yr Heliwr" albums, Crys - easily the most achieving Heavy Metal band ever singing in Welsh - tried their luck with the challenging English-language Metal scene, even making a proud live appearance on Tommy Vance's "Friday Rock Show" in 1983. Unfortunately, as they would soon find out, the competition was way harder that their collective efforts could take (something that doesn't have that much to do with music quality in most cases, as you all should be aware), and the good lads from Crys chose to disband sometime in the mid-80s, much to the grief of their small, but undeniably loyal fan base.

It took almost a full decade until the original members decide to take Crys off the ground and record a new album - something that was surely encouraged by the small but persevering Fflach label, that have been releasing Welsh-language music since the early 80s at least. It was impracticable to fully reunite their "classic" line-up, as guitarist Alun Morgan had relocated to Canada in the interim, so original members Liam Forde (V/RG), Scott Forde (B) and Nicky Samuel (D) would be joined by Mark Thomas (G) to record this "Crys Roc Cafe" CD. The album title and front cover, while being quite obvious puns to the mainstream Hard Rock Cafe franchise, are also some sort of giveaway on the frame of mind of the boys when writing and recording this album: much less Heavy Metal, much much more into pure good old Rock 'n' Roll.

OK, I know Crys was never really engaged in a full-on Metal assault, but they were very much a Heavy Metal band in the past - specially on "Tymor Yr Heliwr", which is also the higher musical point in their career IMO. It's not like they abandoned this notion completely on "Roc Cafe", but they are more than happy to deliver a set comprised almost entirely of mid-tempo rockers, most of it being pretty interchangeable, to be honest. Nothing particularly wrong with such option, of course, and it's nowhere close to any real wimp-out - I'm just pointing out that listeners will be much more likely to remember Rolling Stones rather than Saxon while giving this album a spin, if you know what I mean. Perhaps much of this impression must be credited to the production, that really softened the whole thing, specially on the guitar department: even when they try to sound like a proper Heavy Metal band, as in the two-part semi-epic "Breuddwyd Mawr", the riffs and solos absolutely lack the necessary heaviness to really put your neck in motion.

In the composition front, "Crys Roc Cafe" is a mediocre album, but not in a what-an-utterly-pathetic-pile-of-unlistenable-crap vein of mediocrity. I refer much more to the classic sense of the word: a collection of songs that mostly fail to impress, but without any major flaws as well. It's an album you can listen to with considerable joy, even some genuine appreciation in a few moments - but you're most likely to forget most (if not all) of it as soon as the listening experience is over. The aforementioned "Breuddwyd Mawr" is one of the most interesting songs on display, tenuously reminding some of Crys most adventurous songs of the 80s, and tracks like "Cefnogwyr y Byd" (one of the heaviest here), "Amser Yn Nawr", "Mor Unig" and ballad "Edrych Am Nerth" are reasonably good too. The execution is very passable as a whole, and the sum of all parts makes "Roc Cafe" to be a good enough album; I can't think of anyone giving it pride of place as one of his personal favorites, but it have what it takes to secure a warm and safe place in the collection of many NWOBHM completists. It won't be cheap at all (this CD is long out of print), but you won't be buying torture to your ears, that's for sure.

After releasing "Roc Cafe", Crys went for another long hiatus before reuniting in early 2000s for a few low-key gigs and radio and TV appearances in Wales. The nucleus of the Forde brothers plus Nicky Samuel were assisted in most of these outings by guitarist Grant Roberts, although Alun Morgan himself took part in a prestiged appearance in Faenol Festival, the lads taking one of his visits to Wales as a chance to make a short (but very spirited, I suppose) reunion gig. Unfortunately, it seems that Mr. Alun Morgan passed away in early 2012, an unfortunate event that makes any further reunions completely impossible. Despite this loss, Crys is pretty much active to this day, although they prefer to keep a low profile when it comes to studio recordings and live outings. Their latest release is the CD compilation "Sgrech" from 2006, which also presents the only new song they recorded since 1995, which is also the title-track of the album. Long may Crys live on, and let's hope for a proper new album in a not-too-distant future, huh?

Have you been involved with any of the bands mentioned here? Have any extra info and/or corrections? Please e-mail me at drequon@gmail.com and let me know!
Postado por Drequon às 10:15