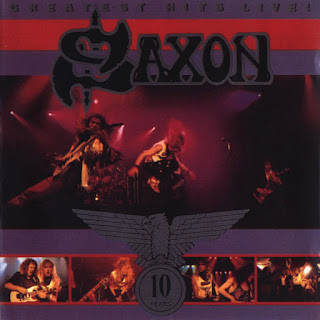 Say what you will about their late 80's input, but it's beyond questioning that Saxon are some pretty thick-skinned guys, you know. Most bands would pack their bags and leave the music scene altogether after a commercial disaster such as "Destiny", and we actually saw this exact chain of events happen on a number of occasions - but Saxon never seemed willing to concede defeat, and obstinately kept things going with a string of live performances, though the big arenas were largely a thing of the past for them at this point. There was no record deal on the horizon, and the situation was far from stable as a whole, but sometimes you just have to stay on track, you know. And it seems the lads had started to look more fondly to their former glories, seeing on all those ever-dependable tunes from the past not only a lifeline through difficult times, but also a clue on what to do next. Mind you, the tenth anniversary of "Wheels of Steel" original release seemed good enough an excuse to get the show on the road, and a celebratory European tour packed with all those popular tunes was hastly arranged, a jaunt that proved to be just what the lads needed to help their cause.

"Greatest Hits Live!" is hardly the most exciting name to be stamped on a live album, that's for sure, and the record bears a somewhat ugly front cover too (bad choice on colors, people), but the musical contents are actually quite entertaining this time around. Released in both CD and home video format by Essential (an imprint of Castle Communications), it clearly tries to sell itself as a comeback album, though it comes out after less than a year of inactivity on the Saxon front. "Saxon are back. You hold the evidence in your very mits", reads the liner notes written by Raw Magazine's Dave Ling, and though it was perhaps too soon for such a statement, fact is that the quintet doesn't sound like a bunch of weary, disillusioned, nearly-retired rockers after all.

The production values are quite raw, but I would dare to say it sound all the more engaging because of that, and perhaps even more lively than (shock horror) much-incensed "The Eagle Has Landed" itself! Ian Taylor, the bloke who engineered the whole thing, sure knew what kind of band he was dealing it, and did a nice job capturing the band's energy and gritty edge upon a stage. Damn sure the anniversary also served as a pretext for preparing a setlist tailored to make old fans happy, something that helped the band's cause in no uncertain terms. But none of it would be of any use if the band couldn't deliver the goods as planned, and that is the most significant triumph around here: after all the tribulation the lads endured in the previous years, it's truly heart-warming to listen to them in such a rapturous performance, playing their souls out song after song like nothing bad ever happened along the way. It sounds like coming home, like meeting old buddies for a pint or two, and you can actually hear them picking up steam in every note, getting their act together to ultimately reconquer the hearts of a fanbase that, even after a great deal of disappointments, still loved them to death. It's that great a feeling, believe me.

There are many brilliant moments around here, like "Heavy Metal Thunder", "And the Bands Played On", "Denim & Leather", "747 (Strangers in the Night)" and "20.000 Ft" (here spelled as "Twenty Thousand Feet" so to avoid any confusion, I guess), all performed with such high levels of dedication and enthusiasm that these cuts easily rank amongst the greatest live performances I ever heard from them, period. Less obvious inclusions like "See the Light Shinin'" and "Frozen Rainbow" also work to great effect, and even the few tunes from their not-so-inspiring later years sound way better than usual: "Crusader" is no less than grandiose, "Rock 'n' Roll Gypsy" is given such a sterling rendition that it turns out to be one of the highlights of the entire CD (yeah, I mean it), and even "Ride Like the Wind" is far from a letdown, believe it or not! 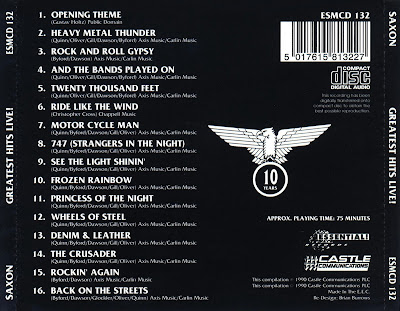 OK, I guess that using both "Rockin' Again" and "Back on the Streets" as final tracks wasn't a truly wise move: both are adequately performed and well up to par with the rest of the stuff, but placing it so late on the running order deprived the album from the explosive, frenzied ending a few more classics would provide and such a record surely deserved. All in all, though, "Greatest Hits Live!" is a rewarding and very pleasant listen - not a mandatory purchase for the average metalhead perhaps, but let's say that buying it will probably be one of the most enjoyable obligations a completist will ever have to fulfill. And the album also served its purpose to get Saxon back in the game, as Virgin felt there was enough mileage in offering the valiant musicians a long-term record deal. That was the chance they were waiting for, you know, and I'm glad to say they didn't drop the ball this time around, as the next batch of studio releases will be more than enough to demonstrate.

Have you been involved with any of the bands mentioned here? Have any extra info and/or corrections? Please e-mail me at drequon@gmail.com and let me know!
Postado por Drequon às 07:16