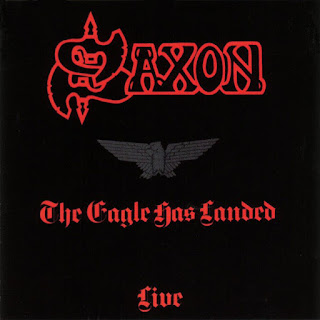 I'm sure no one involved with the production of "The Eagle Has Landed" intended it to be any sort of end point or new beginning for Saxon, you know. Quite the opposite, actually: I think it's pretty clear that the whole point was trying to go from strenght to strenght, keeping the band in the public eye with an explosive live album (and shifting a sizeable number of units in the process) while taking a much-needed break from the grind of touring and gathering forces for the challenges to come. And it would also be a nice way to introduce new stalwart Nigel Glockler, who stepped in at very short notice when Pete Gill resigned from the drum kit following a hand injury - nothing too serious for his health, fortunately, as he would lend his drumsticks to Motörhead not a long while later.

Everything very plausible and full of good (or at least understandable) intentions, I guess we all agree - and the resulting LP was considerably successful on many aspects, as it did sell very well and is still regarded as a classic by most fans and critics. Still, the first official live register from Saxon turned out to be something of a finish line for the lads, as the magic of their 1980-1982 input would never be fully recaptured from that point onwards - and it's curious to verify that, though encapsuling most of the elements that made their golden era so memorable, "The Eagle Has Landed" also shows the first (albeit incipient) signs of gradual decline to come.

Saxon was a huge live atraction back in 1982, to such an extent that they had no less than Ozzy Osbourne as an opening act in a sold-out European tour (yeah, kids, I tell you no lies). With this information in mind, no one will be surprised to learn they had a lot of live favourites to choose from, all raptuously received by audiences all over the world. To shoehorn all those soon-to-be-classics in a single LP would never be an easy task (and the band itself seemed to know it, as they wanted it to be a double package, a suggestion turned out by Carrere), but I'm afraid they still made the wrong choices on a few cuts here. I mean, where are "Denim and Leather", "And the Bands Played On", "Dallas 1 PM" or "Stallions of the Highway" - all staples to their setlist at the time and arguably way more significant songs to Saxon's history than, say, "Never Surrender" or "Machine Gun"? It's not a major fault in here, admitedly, but it renders the LP less representative than it should and takes away a good chunk of the record's context and impact.

I know I may sound a bit too grumpy here, but I also have an issue with the sound production. It's all perfectly loud and clear of course, and there's nothing indisputably wrong with the recording and/or mixing, but the crowd noises are all wrong IMHO, too loud in between songs and way too distant in the singalongs - if you want me to hear the audience on "Wheels of Steel", for instance, just crank it a bit louder, will ya? And some of the band's punch is kinda lost too, with tracks like "Heavy Metal Thunder" and "20,000 Ft" sounding messy and wavering where they should be powerful and convincing. I mean, I'm damn sure it's way less a problem than it seems to be when put on written words, but it annoys me a little, and I guess I just had to take it off my chest, you know.

Most of the songs here featured are immensely enjoyable of course, with "Princess of the Night" and "747 (Strangers in the Night)" being particular highlights. And it would take a huge deal of incompetence for songs like "Motorcycle Man", "Fire in the Sky" and "Strong Arm of the Law" to misfire in a live recording - so you can rest assured all works mostly to great effect, as these five lads from Barnsley are all but unfit to boogie upon a stage. But I still think that "The Eagle Has Landed" just didn't fulfill all of its promises, being a very decent and serviceable set of live renditions, but not much else - and let's face it, a live opus from a band eager to conquer the world just have to be more than that (think Iron Maiden, Deep Purple or UFO and perhaps you'll catch my drift). Though miles away from any sort of disaster, "The Eagle Has Landed" is something of a wasted opportunity to make metal history, and falls short of being a truly memorable record. A must for fans, mostly for its historical relevance, but you shouldn't feel like running straight to the record store in case you still don't own a copy.

Have you been involved with any of the bands mentioned here? Have any extra info and/or corrections? Please e-mail me at drequon@gmail.com and let me know!
Postado por Drequon às 18:10