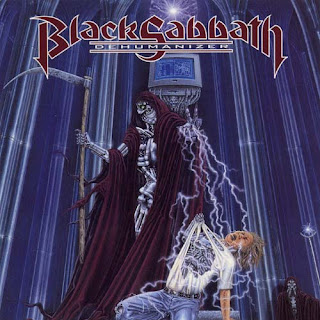 After spending the best part of a decade at the helm of the Black Sabbath's ship pretty much by his own, I guess it's perfectly understandable that Tony Iommi felt tempted by a offer to rejoin old buddy Geezer Butler and much-famous singer Ronnie James Dio for the purposes of a new album. Though Iommi always made clear his overall musical contentment with the Tony Martin fronted version of the band, record sales never got any close of being really inspiring, and the increasing difficulties to book enough shows for a proper tour (not a single one happened in the USA to promote "Tyr", you see) sounded like no good news to anyone involved with the Sabbath enterprise. Not only a reunion with Butler and Dio seemed artistically interesting, but it also looked commercially viable, and I suppose it didn't took much of an effort to convince Iommi to discharge Tony Martin and Neil Murray from their duties and assemble a new line-up, with Cozy Powell retaining his place behind the drum kit at first.

Contrary to what most people perhaps would expect, it took them over a year and a lot of hard work to make things happen. After got injured while riding a horse on a break from rehearsals, Powell had to be replaced by Vinnie Appice, effectively reuniting the line-up responsible by "The Mob Rules" way back in 1981. There was a growing level of creative tension between Iommi and Dio, with songs being demoed and re-written almost on a weekly basis. The whole process got close to a nightmare after a while, and nearly a mllion dollars were spent on the recording of "Dehumanizer", something that alarmed those writing the paychecks to a great extent. After such a long time in the making, the expectations were understandably high, and the new Sabbath record needed to be quite a strong one to worth all the effort. Turns out it was, fortunately.

I'm not at all afraid to say "Dehumanizer" is probably the best Sabbath record since "The Mob Rules", and much of it must be credited to a more careful, focused approach to songwriting. As soon as the thunderous drumming in the beginning of "Computer God" bursts out of the speakers, the listener is made sure that something heavy is under way, and this supremely well-crafted number moves from ominous to forceful seamlessly, being actually impossible to say it took many months to finish it! Next comes the morbid "After All (The Dead)", and it's already beyond question by this point that this incarnation of the band is unwilling to take any prisoners. Make Sabbath great again, they said, and they actually meant it.

I would like to point out how important this record is in Ronnie James Dio's chronology. He seemed to be trying to write a truly metal-to-the-soul album at least since the mid-80s, as the magic conjured on "Holy Diver" and "The Last in Line" seemed remarkably elusive on later releases (though there was never any true stinker on sight, mind you), and I guess he found on his return to Sabbath the perfect chance to do so. Not to mention his (perhaps unconscious) determination to prove the world he still owned the most technically-gifted voice for Sabbath - not that Tony Martin threatened to relinquish the throne, you know, but he did quite a good job on studio and got very close to become the definitive Sabbath-sans-Ozzy singer in the vision of many fans. Such scenario helps to explain his very strict work ethic on writing, and results on perhaps the grittiest, most aggressive performance from his entire discography. His singing on tunes like "TV Crimes" and "Computer God" is nothing less than memorable, and his lyrics move away from pocketbook-fantasy themes to more sinister, misanthropic territories, being a bit silly on a few cuts perhaps, but working magnificently on others - I for one love every single word on "TV Crimes", and his raspy singing only enhances the scornful, mordacious message against television preachers and monetized religion.

Tony Iommi riffs are back as well, and almost every single tune in here have at least one or two memorable guitar themes to its credit - I mean, how cool the simple-but-catchy main riff of "Time Machine" is? Can anyone dismiss the guitar work on "Master of Insanity" and the aforementioned "After All (The Dead)" without a great deal of previous, unjustified disdain? And even when it gets slightly too derivative for its own good, as on "Buried Alive" (the main riff is a rehashing of "Zero the Hero", you know), it still works to good enough effect, mostly due to a newfound sense of confidence and bite. Being under pressure had a good effect on the axeman, you know. And having good old Geezer Butler back is a pleasure to the ears, as his bass is loud and clear on the mix, and his basslines are as thunderous as a running herd of buffalo, believe me. Vinnie Appice handle the drumsticks with the usual dexterity and never misses a beat too, so you can rest assure all performances are well up to scratch on this one.

There are a few less impressive songs of display, that's a fact: I never really fell in love with "Letters from Earth", for instance (though I'm aware many late-era fans of Sabbath hold this one on great regard), and "Sins of the Father" is a mostly confuse composition that really should have stayed on the oven for a little longer, if you ask me. "Too Late" may also have grown a bit tired as the years passed, but most of the other tunes still rock like a monster and there's more than enough goods in the package to keep it highly interesting to this day. It's a bit of an anomaly on Sabbath's discography, admitedly, as it is perhaps the most brutal record they ever done - and, though their most successful release in years, it did not garner the attention it deserved, since it came out in a time the hype towards Seattle and the grunge scene was at its greatest. It was all unfortunate if you ask me, and this particular reunion would not last for long, as the band's insistence to open the stage for no less than Ozzy Osbourne on his 1992 "farewell" tour turned out to be way more than Dio's pride would be willing to take. The singer jumped ship later that year, and Sabbath's future became uncertain once again - but at least we have this furious, intense record as a legacy. Don't pay too much attention to the naysayers and add it to your collection at the earliest opportunity.

Have you been involved with any of the bands mentioned here? Have any extra info and/or corrections? Please e-mail me at drequon@gmail.com and let me know!
Postado por Drequon às 08:39