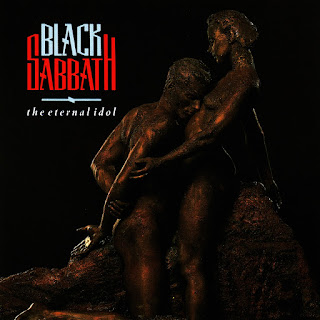 Things were far from stable in the amazing world of Black Sabbath back in 1986. Though he sure did a perfectly fine job on "Seventh Star", singer Glenn Hughes always stated that, in his point of view, the whole thing should have been a solo album from Tony Iommi rather than a Black Sabbath record. Disenchantment with the whole thing just followed suit, and the fact that substance abuse was taking its toll on him didn't help matters at all. Hughes left halfway through the tour to support "Seventh Star", and Ray Gillen (then singing on Bobby Rondinelli's solo project) swiftly signed on the dotted line. After a short and not-really-successful tour (nearly half of the USA dates were cancelled due to poor ticket sales), Tony Iommi put on a brave face as usual and work duly commenced on what would, after considerable duress, become "The Eternal Idol".

The whole production process was plagued by problems. Original bassist Dave Spitz left in an early stage, being replaced by Bob Daisley (ex-Ozzy Osbourne/Gary Moore/Uriah Heep etc) - a safe choice in more than one sense, as Daisley's songwriting skills would also counterbalance the lack of creative input from the other guys, most of all Ray Gillen. After some internal friction, the singer would pack his bags soon before work on the new album was over (he would later join Blue Murder and Badlands), forcing Iommi to hire then-unknown Tony Martin - a recruitment made at such short notice that he had to record his vocal tracks in a separate studio, with instrumental cuts concurrently being mixed somewhere else.

With such internal turbulence, it would be quite unreasonable to expect "The Eternal Idol" to be a supremely well-crafted and/or stunningly cohesive record. Still, it's actually quite a good album most of the time, with some truly inspired performances and a fair deal of very respectable songs to its credit. In a time when everybody seemed to see Black Sabbath as a dead entity and a thing of the past, Iommi and his accomplices somehow managed to conjure quite a strong album out of all the mess - not an all-time monster for sure, but a worthy addition to the band's discography nonetheless.

I always thought that most (well, almost all) of the ridicule directed towards Tony Martin throughout the years was unjustified and immensely unfair. He is quite a talented singer actually, and the fact that he managed to deliver such a strong performance in a very short period of time speaks volumes about his commitment and professionalism. Some may say his voice is far from distinctive, and I concede it's fair enough a point to be at least considered, but I think it's way more important to acknowledge just how fine his clear-yet-powerful register gelled into the songs here featured. Standing where Ian Gillan and Glenn Hughes once stood (and I don't mean to compare any technical prowess here, readers take note), Martin does indeed sound like an improvement, in the sense that, with him, Black Sabbath sounds way more like the Sabbath we all learned to love. Just listen with an open mind to his excellent performance in songs like "Hard Life to Love" and "Nightmare" and perhaps you'll catch my drift.

Tony Iommi is also a highlight, bringing some seriously strong riffing to the table. Actually, I would stick my head out and say it is perhaps his best showcase of riffs since "The Mob Rules" at the very latest, though I'm sure some of you won't agree with this statement at all. Along with Bob Daisley, he managed to craft tunes like the truly impressive "The Shining" (one of the finest songs Sabbath wrote in the 80s, no less), the eerie "Ancient Warrior" and the nice hard-rocking "Born to Lose", all more than worthy to feature on the repertoire of such a heavy metal behemoth. There's not that much a change in style from "Seventh Star" in fact, as tracks such as "Glory Ride" bear more than a passing resemblance with the hard-rock-almost-AOR vibe of the preceeding album - but the whole endeavour is surely enhanced by more prominent riffing and tighter songwriting, most songs here being way more substantial and powerful as a result.

It's Black Sabbath from the 80s, you know, with prominent keyboards and all that, and most lyrics are actually too silly to deserve any serious mention. The album also loses steam towards the end, with the in-your-face, but somewhat confuse drive of "Lost Forever" failing to impress and the title track's somber-Sabbath-by-the-numbers vibe being a slightly disappointing finish line for the album. But "The Eternal Idol" gets a very strong three-star rating (I actually considered giving it four stars for a while, you know) for recapturing a fair deal of the magic that was quickly slipping away from the band, getting as far as being genuinely bombastic in a few moments. And it's also something of a coup for Tony Iommi himself, as it comes to show he was indeed capable to keep Sabbath's musical coherence at a pleasant level even without the presence of any other founding members. It's unmistakeably a Black Sabbath album through and through, and a pretty good one on that - perhaps it will lack appeal for less devoted listeners, but I'm positive there's more than enough here for Sabbath fans to justify their money. Just quit the "No Sabbath without Ozzy/Dio" bullshit and give this one a few spins, will you?

Have you been involved with any of the bands mentioned here? Have any extra info and/or corrections? Please e-mail me at drequon@gmail.com and let me know!
Postado por Drequon às 06:44