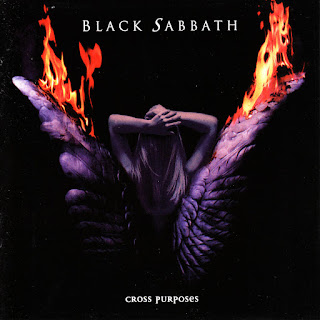 It seemed to be a great idea at first, and it gave quite a tasty metal fruit in the shape of "Dehumanizer", but the first attempt to bring Ronnie James Dio back into Black Sabbath was a short-lived one. Mere five months after the release of the aforementioned CD, the distraught vocalist decided to pack his bags and bid adieu in November 1992, as he couldn't bring himself to open the stage to none other than Ozzy Osbourne himself - then billing the two shows in Costa Mesa, California as the final gigs of his "farewell" tour. The scheduled performances went out as planned, famously presenting Rob Halford as a guest singer, and the fact that the famous 4-piece of Iommi, Ward, Butler and Osbourne shared a stage for the first time since 1985 set the metal fraternity in wild anticipation, with every single long-haired headbanger on Earth keeping fingers crossed in hopes for a full-scale reunion of the original Sabbath. But Tony Iommi was still pretty much under contract with I.R.S., and the label soon made clear they wanted another record to market around. Keeping good old Geezer Butler beside him, Iommi brought Bobby Rondinelli in to handle the drumsticks, and erstwhile singer Tony Martin agreed almost instantly to rejoin the fun.

In later interviews, Geezer stated that he first thought that "Cross Purposes" would be something of a Iommi/Butler offshoot, something to keep themselves busy with while agents and lawyers were clearing the path for a Sabbath reunion. I would never dare to call the man a liar, you see, and it's up to you to take his words on face value or not, but I'm strongly suspicious that it was way more a case of fulfilling contract obligations than anything else. There's no way a middle sized label like I.R.S. would give up a contract with Sabbath, and signing the dotted line with Ozzy Osbourne would never happen as long as this obstrusive agreement was still in effect. When you take all this into consideration, it gets increasingly obvious that releasing a handful of filler albums under the Sabbath name was the best option for all parties involved, even though some of the musicians may not have been fully aware of it at the time.

Many riffs and song structures here featured were first demoed during the never-ending pre-production sessions for "Dehumanizer", a clear indication that "Cross Purposes" was knocked together at relatively short notice and the band just didn't bother that much to create a full set of new compositions from scratch. Still, the chemistry between Tony and Geezer is as dynamic and engaging as ever, and Bobby Rondinelli brings with him a technical, refined approach to the rhythm section that works admirably throughout. Things start fairly promising with "I Witness", mixing a near power-metal drive with some seriously groovy riffing to achieve mostly amazing results. But next comes "Cross of Thorns", a somewhat unconvincing semi-ballad that runs from end to end without finding the hook to make it stand out in the crowd, and well-tried listeners will soon be aware they're bound for an inconsistent ride.

Being an obstinate defender of Tony Martin's early studio performances myself, I must say his singing is quite less convincing this time around, opting for a cleaner, hard-rocking register that is perceivably at odds with the darker leanings the rest of the band seems eager to explore on occasion. Songs like "Psychophobia" and "Cardinal Sin" are the most affected by this maladjustement, with Martin being surprisingly unable (or unwilling) to deliver the sinister, more forceful connotations these otherwise pretty decent tunes so blatantly required. I don't know what happened really - maybe it has something to do with the presence of Geezer Butler, who wrote many of the band's finest lyrics and would undoubtedly want to have a say on this department? Whatever the story, the finest performances from Martin will come in the shape of "Evil Eye" (with none other than Eddie Van Halen as an uncredited co-songwriter) and "The Hand that Rocks the Cradle" - not surprisingly, some of the less gloomy cuts from the entire record. These are the moments where "Cross Purposes" really peak and bear a charm all of its own, and those willing to hear these tunes with an open mind are very likely to have a good deal of fun.

"Cross Purposes" marks a transitional period for Black Sabbath, and perhaps that's precisely its undoing. As a record, it fails to define its own boundaries, being close to the heaviness of "Dehumanizer" in places, then veering away from it quite abruptly in a matter of minutes. You can go from the morbid, convincing doom metal of "Virtual Death" to the confuse mishmash of heavy riffing, new-age keyboards and uneven transitions of "Immaculate Deception", and then straight into the unsure balladry of "Dying for Love" - and tell me, dear reader, where are we all supposed to stand after being taken from one direction to another in such a confuse manner? It's not a bad album at all, and this 2-star rating should be taken with a pinch of salt really, as there's some very interesting songs and a lot of worthwhile moments around here. But its lack of cohesion is impossible to ignore, and the fact that this particular line-up didn't last the distance only adds to the feeling that the whole project was much more a product of chance rather than design. Most people can easily live without a copy, but this curio is worth checking out if you've already listened to all the essentials and just need some more Sabbath in your life. And there's no such a thing as too much Sabbath for a devoted headbanger, you know.

Have you been involved with any of the bands mentioned here? Have any extra info and/or corrections? Please e-mail me at drequon@gmail.com and let me know!
Postado por Drequon às 20:24