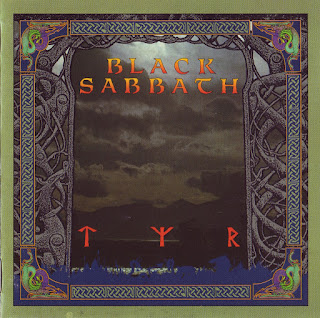 As I'm sure you already gathered by reading the previous reviews (if you ever read it, that is), the second half of the 80s was a long period of soul-searching for Black Sabbath. Carrying the torch pretty much by his own, Tony Iommi just put on his bravest face and went from poorly-received albums to not-really-successful promoting tours, one straight after another and with very little time to ponder on anything that was going on. Being well aware that Sabbath were fighting a losing battle in the USA (where no one bothered to buy their LPs and shows were constantly cancelled due to poor ticket sales), Mr. Iommi set his sights on markets yet unexplored, with a very successful jaunt to Russia during the "Headless Cross" tour being just what the band needed to boost morale. Some people still wanted new music from Sabbath after all - and, faithful to their work ethic during those troubled times, the axeman and his cohorts (now augmented by much-travelled bassist Neil Murray, whose associations are too many to mention really) duly entered studio once more to craft what we now know as "Tyr", one of the less typical records on the entire Sabbath canon, if truth be told.

Though not exactly a concept album, fact is that the whole package tries to conjure a sense of thematic unity around Norse mythology, going as far as using some runes on the front cover - though the symbol drawn as an 'y' would actually be a modern 'x', and I'm positive they didn't wanted to name the record "Txr" after all! It transpires that the whole idea evolved around the lyrics written by Tony Martin, who tried to distance the band from the quasi-satanic imagery of previous records in favour of something a bit less predictable and/or tongue-in-cheek. I guess it was a moderate success on that matter, though you're going to have a hard time trying to find a more subtle meaning on verses like "When the winds of Valhalla run cold / Be sure that the blood will start to flow", I'm afraid.

But perhaps the most radical departure comes on the music department, actually. I tend to think that Tony Iommi, though not at all unhappy with his status as the world's very first metal riffmaster, would just feel weary of such persona from time to time. Nothing objectionable of course, and even a positive sign of artistic yearning many would never want to give him credit for. I would say that "Tyr" was another one of those instances; I mean, he just kept most of the riffs for himself this time around, opting for power chords, ethereal melodies and/or E-string stroking on nearly all of the songs here featured. It's not a bad thing perforce, and it even works quite well on some tracks (more on that in a minute), but Sabbath just need prominent riffs to be the Black Sabbath we love, this being almost a second line of storytelling in the band's formula along with the vocal tracks. When it's nearly gone, an unique feature of the Sabbath brand disappears as well - and it shouldn't come as a surprise that "Tyr", far from a disaster it is, sounds like nearly an anomaly in the band's discography, being closer to heavy/power territory than anything else (I kid you not).

I happen to like opening number "Anno Domini" quite a lot - though it starts with a guitar picking uncanningly similar to "Children of the Sea", its grandiose vibe (enhanced by prominent keyboards and some multilayered vocal choirs) sounds far from predictable or contrived, not to mention it also showcases some of the finest riffing from the entire record. Surely a winner. "The Sabbath Stones" is also a strong number, with a slow, grinding built-up to a pretty cool chorus, and a faster final section highlighted by a fiery solo. If this one was on a Ronnie James Dio record it would be regarded by some as a classic, no doubt about that! "The Lawmaker" is also respectable, fast and engaging enough to make the grade, but "Jerusalem" (decent song construction, but the rather pointless oh-oh-ohs during the chorus are kinda annoying) and "Heaven in Black" are serviceable at best, and "Feels Good to Me" is a yawn-inducing ballad completely at odds with the rest of the material, and it should never have made its way into the final product if you ask me. The arc formed by "The Battle of Tyr", "Odin's Court" and "Valhalla" is also something of a letdown, as it pretty much fails to tell a proper story and never attains the sense of unity one would expect from such an exercise. It's not that bad, admitedly, but it's nothing to write home about either. 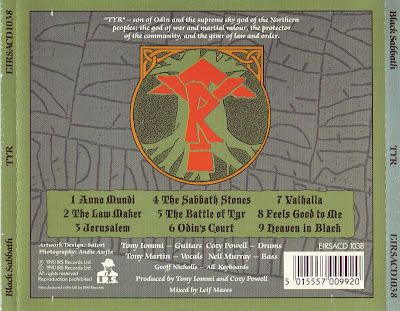 On many later interviews, Tony Iommi would tell of his regret about disbanding this particular incarnation of Sabbath, expressing his view that the band had a good thing going and would eventually have regained most of their former status if given enough time. It seems to be an honest opinion (and who would not have enjoyed playing alongside Cozy Powell and Neil Murray for as long as possible?), as he would even regroup this exact set of musicians for the ill-fated "Forbidden" album in 1995. Still, I think good old Tony is wrong on this one: though mostly a respectable album, "Tyr" was nowhere near a return to top form, and it also marks the first time the band ever failed to book any shows to promote a record in the USA, which is hardly a sign of greater things to come. Trying to rekindle Sabbath's fire by bringing old stalwarts back home was something of a predictable move by this juncture, and when Geezer Butler and Ronnie James Dio both signalled their interest in rejoining the band, I guess there wasn't much room for second thoughts in Tony Iommi's mind. As for this LP, it's a good one to have around the house if you are a dedicated metal fan, but it's hardly a world beater, and those less concerned about Sabbath's history should not be ashamed to invest their hard-earned cash on something else.

Have you been involved with any of the bands mentioned here? Have any extra info and/or corrections? Please e-mail me at drequon@gmail.com and let me know!
Postado por Drequon às 17:36