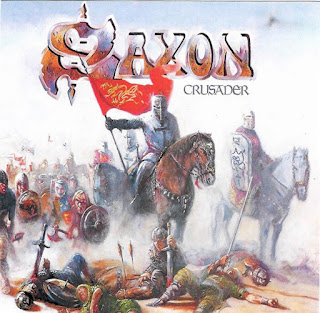 After a consistent run of strong releases with Carrere, Saxon made considerable (and understandable) waves when they announced their agreement to join EMI's roster back in 1984. It was quite a move at the time, and you don't have to look further than Iron Maiden (one of the most successful acts EMI ever got under their wing) to realise the label really meant business with this association. With the quintet already signalling their intention to conquer the USA market on previous record "Power & the Glory", it was clearly a case of shared interests between band and record company, and "Crusader", the first LP generated by such collaboration, is a unmistakeable demonstration on what both sides had in mind.

If I had to describe this album with a single word, my choice would be "calculated". I wouldn't go as far as to say it is completely devoid of spontaneity, you know: it's more like, after a handful of studio releases knocked out at very short notice, Saxon kinda enjoyed the time to think they had while doing "Power & the Glory" and decided to fully consider everything that should be done before commiting any songs to tape. There's precisely nothing wrong with such approach, just to make things clear - but, for a band that earned almost all of their reputation by being unassuming, rough-and-ready metal for the working class, it's way more profound a change that it may seem to be at first. And oh yeah, I heard all the tales about how they never really planed to record Sweet's "Set Me Free", how "Crusader" (the tune) came to them almost by chance etc, but I simply don't give these too much credit, sorry about that. Saxon were far from green in the business, and they knew what they wanted to achieve: a polished, radio-friendly, nearly innofensive version of the band, while still retaining enough of their usual charm to keep old fans satisfied. And that's exactly what you get when "Crusader" (the record) gets a spin in your stereo system.

Let's take the title track as an example. It kicks off the album in a very strong fashion, with a truly epic vibe that works admirably well right from the start and straight until the end. A remarkable song, really, and it's no surprise that it is a fan favorite to this day. It reinforces the heroic conotations of "Power and the Glory", also an opener and also a title-track for their previous album - all in a time when bands as different as Iron Maiden and Manowar were inciting the listener's imagination with similar imagery and themes. I mean, it's not like Saxon were just carbon-copying the competition, but I guess they were paying serious attention to everything what was going on around them and eager to add any elements they felt would be an improvement to their formula. The group would stick with some of these changes (such as the warrior-themed songs and illustrations) during the remainder of their career, while others, well, nearly killed Saxon in the long run.

I hope you really enjoy opening number "Crusader", you know, because it's the only moment of genuine musical grandeur around here. Most of the other tracks are serviceable, but pretty faceless and clichéd hard/heavy exercises like "Rock City", "A Little Bit of What You Fancy", "Bad Boys (Like to Rock 'n' Roll)" and "Just Let Me Rock", all featuring some brain-dead lyrics about (you guessed it) the sheer joy of living the rock and roll lifestyle to the full, whatever the hell it's supposed to mean. Oh well, I sure enjoy the occasional party as much as anybody else, but there are a few other topics one can sing about, you know, and I'm afraid that spending half an album on such a frivolous subject is a bit too pedestrian for comfort. And what's up with all that banter from Biff Byford during songs? It's so damn over-the-top that it seems like he's trying to be the English version of Dee Snider - BTW, I won't be remotely surprised if Twisted Sister received royalties for "Just Let Me Rock", as it wouldn't be at all out of place on the "Stay Hungry" LP!

Picked up as the first single, "Sailing to America" had to endure a lot of ridicule throughout the years, but I actually think it's one of the best songs from the entire record, though the not-remotely-subtle title is quite a giveaway on what they had in mind while writing it. The song blends high doses of melody with some definitely epic leanings and, though not a tune I would have chosen for a first single as EMI did, I feel it is a perfectly adequate exercise on broader waters, almost a breath of fresh air in terms of songwriting - compared to their newfound obsession with all things "rock", at least. On the other hand, "Do it All for You" is feather-weight balladry with lyrics as shallow as the name suggests, perhaps the most alarming sign of bad times to come, and "Run for Your Lives" closes proceedings on quite a confusing manner, going from tension-building guitar harmonies to a not-very-impressive chorus - and then some football hooligans just come out of nowhere, trying to pass as a native-american chanting of some sort. Yeah, I didn't get it either.

Though far from disastrous (it actually sold very well, and the accompanying tour was a resounding success), "Crusader" was met with a mixed response, many once-faithful fans starting to veer away from the increasingly commercial direction the band was taking. Artistically speaking, it simply falls flat when submitted to more rigorous scrutiny - and I'm far from happy to admit it, as it was one of the very first LPs I heard from Saxon and it brings back some nice memories every time I give it a spin. As I said on an earlier review, I don't blame them for giving it a try, but it shouldn't have been that hard to realise it wasn't working - and perhaps even Saxon themselves sensed it somehow, as they perceivably tried to raise the bar musically when writing the following album "Innocence is No Excuse". But now they had a serious (and potentially unsolvable) dilemma to fathom: should they just stop trying to please everyone and set their sights on conquering the charts once and for all, at the risk of further alienating their loyal fanbase and damaging their credibility, perhaps for all time? More than 30 years into the future, we all know what happened next, but let's save some of the deliberation for the next instalments, right?

Have you been involved with any of the bands mentioned here? Have any extra info and/or corrections? Please e-mail me at drequon@gmail.com and let me know!
Postado por Drequon às 19:13