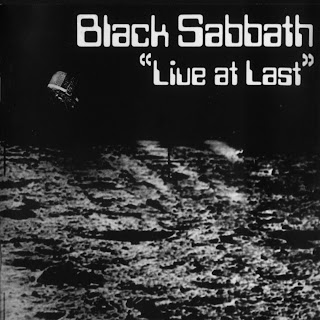 Strange as it may seem, it's not an overstatement to say that "Live at Last" was the beginning of the end for the partnership between Black Sabbath and Ronnie James Dio, though he doesn't actually sing on the album! In fact, the very first official live album from Sabbath was released without the approval of the band themselves, as their former manager Patrick Meehan owned the rights to the recording and licensed it for release on NEMS label, along with reissues of all studio albums prior to "Heaven and Hell". The legality of such editions is dubious at best, but the live album actually sold remarkably well at the time - much to the disfavour of the musicians involved, as they never gave permission to such releases and probably never saw a penny of it on their bank accounts. The whole situation prompted Black Sabbath to release a 'proper' live record, christened as "Live Evil" - and it was during the mixing process of such album that a few ego clashes emerged and Ronnie James Dio decided to jump ship as a result. If Patrick Meehan wanted to cause harm to Black Sabbath, I guess he ultimately succeeded, though not exactly as he perhaps imagined.

The recordings comprising "Live at Last" were taken from the tour supporting "Vol. 4", the tapes being shelved at first after deemed by the band as unworthy of release. It's not as atrocious as this original fate would suggest, as everything sounds well into the required technical standards, most of all on remastered versions. But I kinda see why the lads weren't exactly falling over themselves upon releasing it: the performances are mostly decent, but the final results are not as striking as the first live album of Black Sabbath was supposed to be. Take "War Pigs" as an example: it's a true colossus of metal, one of the most menacing and bombastic songs ever recorded, and the very first official live cut of it should be no less than impressive. The version on "Live at Last" is far from bad, but it leaves to be desired: Ozzy (or "Ossie", as the liner notes ridiculously misspelled it) makes a rather faceless rendition of the song, and the instrumental sections are delivered with proficiency, but not much else. It's good enough of course, but simply because it's one of the best metal songs ever written, not because it was delivered with breathtaking energy or bite.

The same diagnosis above can be applied to "Paranoid" and "Children of the Grave" for instance: both songs are obviously strong enough to stand on their own, but could (and should) have been immortalised on a live release via better (and more charismatic) performances. Not to mention many undisputed classics that were not immortalised at all: "Iron Man" is a blatant absence around here, most of all because it sure was part of the shows and therefore a recording must have existed in usable form. "Killing Youself to Live" is an interesting addition though, as it's a slightly different version from what would later appear on "Sabbath Bloody Sabbath" (the shows took place a few months before the studio LP was released). "Wicked World" (a tune from the very first days of the band and which wasn't originally included on any studio album) is also a curio, though I'm not exactly thrilled by the never-ending improvisations that render it nearly 19 minutes long.

For today's listeners, "Live at Last" is interesting in respect to its historic value (enhanced, quite ironically, by the unfortunate timing of its original release), but it's not like you should be ashamed of yourself if you don't happen to have a copy on your shelf. It will be an entertaining ride if you do (songs like "Snowblind" and "Sweet Leaf" can do no wrong, you know), but it's not an essential item by any stretch: one for completists, and that's all.

Have you been involved with any of the bands mentioned here? Have any extra info and/or corrections? Please e-mail me at drequon@gmail.com and let me know!
Postado por Drequon às 20:30