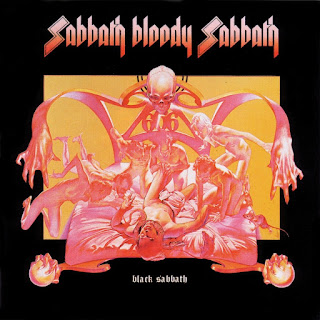 For most purposes, "Sabbath Bloody Sabbath is a coherent continuation to "Vol. 4": an album which welcomes the prog rock wave of the mid-70s with open arms, but also tries to blend it with the most recognizable trademarks of Black Sabbath's sound. It worked out well enough first time around, though "Vol. 4" is a slight (but perceivable) letdown from its three mammoth predecessors. But "Sabbath Bloody Sabbath" is quite an improvement, being a far more cohesive and challenging album in comparision - and it's nothing to do with being less proggy at all, as the strings arrangements and experimentations are more than evident and even Mr. Rick Wakeman of Yes fame would appear as a guest keyboardist in a few songs. It has more prog elements than ever before, but it stills sounds way more like Black Sabbath than their previous effort! To comprehend the reasons behind this, I suppose one must look back in time a little and investigate what was lacking (or overdone) one year previously.

Being musically sophisticated was never a strong aspect of Sabbath's appeal, but their music always showcased a very particular sense of drama, in which the lyrics will only complement the eerie landscapes created by monolithic, near-oppressive instrumentation. Tony Iommi's unique approach to guitar riffing is perhaps the most important element in such formula - and where "Vol. 4" lacked memorable guitar parts, "Sabbath Bloody Sabbath" brings Iommi's riffs all back to the frontline. The title track opens proceedings a bit like a statement of principles: the magnificent main riff is there, right at your face, with no embellishments or distractions. Almost all songs are carried along by two or three prominent riffs, and even those moments when Tony allows himself to be a bit more flamboyant (such as the main riff of "Killing Yourself to Live" and the euphoric first part of "Sabbra Cadabra") sound more focused and to the point, contributing to the intended effect rather than diverting the listener from it.

I wouldn't say "Sabbath Bloody Sabbath" is a bleak album, but it's not a jolly light-hearted journey either. If "Vol. 4" seemed to be a conscious attempt to sound uplifting and dissociate Black Sabbath from an image of despondency and devil-worshipping (which was never the point of Sabbath's music, really), their fifth instalment recaptures a more meditative, almost transcendental mood that was always a feature on previous albums, but never to such an extent. Some of the finest words Geezer Butler ever wrote are on this album, rendering songs like "A National Acrobat" and "Spiral Architect" even more striking and enjoyable. It sure better fits the experimental arrangements and adventurous instrumentation here featured than the mundane (sometimes even radio-friendly) themes on "Vol. 4" - and when you put all things together, the results evoke a feeling of musical maturity, consistent with a band moving forward rather than simply celebrating success and all the excesses that come with it.

It's not a perfect album, and some minor shortcomings (most of all the boring synth-based "Who Are You", that never really seems to get going properly) prevent it from really match the sky-high levels of "Paranoid" and "Master of Reality". But "Sabbath Bloody Sabbath" is an excellent record with a strong sense of cohesion - something that, to be point-blank honest, the classic line-up would never fully achieve from this point onwards. Here is a band trying to raise their creative stakes, working as a unit to the height of their powers - faithful to the musical monster they originally conjured, but expertly adding ingredients to the cauldron so to make their magic potion even more impressive. I love this album from the bottom of my heart, and repeated listens only reinforce its important place in the band's discography.

Have you been involved with any of the bands mentioned here? Have any extra info and/or corrections? Please e-mail me at drequon@gmail.com and let me know!
Postado por Drequon às 19:05