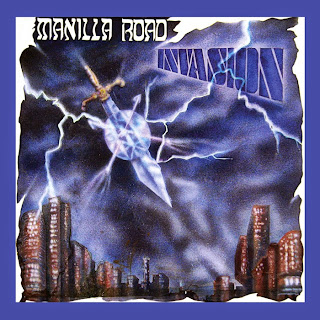 More than a band, Manilla Road is a true underground institution. They sound unique, they always kept an independent spirit, and their sheer determination to soldier on regardless of many band changes and utter disinteress from major record companies is truly remarkable. They are metal legends in their own right, and I wholeheartedly believe all the accolades are more than justified.

The humble beginnings of Manilla Road date back to the late 1970s, when now-legendary Mark Shelton (V/G) teamed up with Scott Park (B) and Rick Fisher (D) to give the rock scene of Wichita (USA) a few noisy nights. It's clear for all to hear that they were still finding their feet by the time "Invasion" hit the shops in 1980, but they sure deserve credit just for getting the LP out in the first place. Playing heavy music in Kansas wasn't exactly the most straightforward move towards success you could make at the time, and the lads soon realized they would have to rely solely on themselves if they ever wanted to have an album out. Recorded at a certain Miller Studio in Newton Ks. (probably someone's basement, you know) with a seemingly microscopic budget, "Invasion" won't be the most competently produced or pristine sounding record you'll ever hear, but I guess the near amateurish sound values are not much of a problem, as it somehow enhances the commendable energy behind some quite ambitious (yet still underdeveloped) compositions.

The album oscilates from hard rock to Rush-inclined progressive attempts, with acid rock/psychedelic tinges here and there and only a few hints of their later style of choice. It's a formula that obviously lacks cohesion, but provides enough good moments to make "Invasion" a worthwhile listen.  "Far Side of the Sun" is almost impressive, with a space-rock inspired intro and a simple (yet forceful) song construction that really manages to capture the listener's attention. I also like "Cat and Mouse", where Mark Shelton's guitar prowess really carries the song along, while ballad "Centurion War Games" is the first tune to evoke the epic metal feel of later releases - and it's a convincing one on that, though acoustic guitars are hardly the most common way to conjure such an atmosphere. The 13-minute long closing number "The Empire" also moves across some definitely epic (albeit slightly repetitive) avenues, with Shelton's guitar playing sounding truly impressive once again. He usually downplays his dexterity when mentioning earlier releases, but I really think he's nearly as good here as he would be later on.

I must say that "The Dream Goes On" and "Street Jammer" may be far from atrocious as proto-metal offerings, but are far from being memorable in any sense either - especially the latter, which sounds a bit too cheesy for comfort. The fact that there are only six songs to be heard in total is also something of a letdown, as some ideas turn out to be stretched to near-breaking point - a feeling that grows even stronger when the listener is confronted with some overly long (and slightly boring) interludes. Still, I think that "Invasion" is a victorious, mostly good record that laid the foundations for a glorious history to come, so those of you with an interest for heavy metal history really should consider giving it a few spins. Actually, it's a chance to glance into the melting pot and behold this epic power metal colossus taking shape, quite a funny experience if you're in the right frame of mind.

Have you been involved with any of the bands mentioned here? Have any extra info and/or corrections? Please e-mail me at drequon@gmail.com and let me know!
Postado por Drequon às 16:08