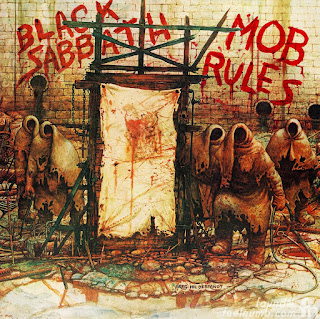 At first, "Mob Rules" hits you with a bang. It surely has it all, you know: a nice front cover, strong individual performances and a extremely competent production, all in service of a quite varied, but still very cohesive set of compositions. Black Sabbath were undoubtedly invigorated after the significant commercial and artistic success of "Heaven and Hell", and a truly efficient (and short on oddballs) record like "Mob Rules" was exactly what they needed to keep the wheels in motion. OK, Bill Ward is no longer there due to its alcohol abuse, but Vinny Appice handle the drumsticks quite competently and really leaves very little to be desired. There's nothing to be fervently disliked on this album, so any harsh criticism would surely be an exaggeration. C'mon, some even consider it to be better than "Heaven and Hell", which is a pretty acceptable way to see things when you think of it. Still, the second Sabbath album with Ronnie James Dio on the mike stand relies heavily on a few functional, but not very sophisticated tricks to get the job done - and it loses appeal once you realise what's going on, like a gag kind of magic that becomes increasingly silly with repetition.

Let's start with "Turn Up the Night", the opening number around here. It's surely pacey and lively, with a then-modern approach to guitar that screams NWOBHM for all the good reasons. It's also meant to be instantly engaging, a song crafted to put necks and hairs in motion... just like "Neon Knights" one year previously. "The Sign of the Southern Cross" sounds gloomy and ominous, carried along by evocative lyrics and bringing Iommi and Dio to the forefront - exactly how an amalgam of "Children of the Sea" and "Heaven and Hell" (the song) would sound like, heh? The mysterious woman in "Lady Evil" takes a slightly different form in "Country Girl", but still conjures the same imagery (and a somewhat clichéd one, even back then), still serves to the exact same purposes. And even closing number "Over and Over" is a repetition of sorts, as its heavy-blues vibe bears more than a passing resemblance to "Lonely is the Word" - seriously, just listen to it.

It's not to say that the lads just took the template from their previous album and repeated it note by bloody note, of course. Maybe "Turn Up the Night" is a slight bit too disjointed for its own good, but all the other songs above mentioned work perfectly well, with "The Sign of the Southern Cross" easily being one of the highlights of the LP. But a more strict analysis makes it all too clear just how safe Black Sabbath is playing throughout this record, to such an extent that you will need a little bit of effort to overlook it in places. No matter how competently they are doing it, still we're listening to Sabbath playing by numbers - and it's not how classic albums are done, not to mention that it was hardly by using well-worn formulas that Black Sabbath made its way into rock and roll history.

But oh well, even your run-of-the-mill Black Sabbath is markedly better than most of the competition, so don't go away thinking about turning you copy into a frisbee or something. There's a lot of charm going on during "Voodoo", for instance, and "The Mob Rules" is seriously vicious, one of the most unbridled and direct songs from the band's entire repertoire. It's a slightly more somber record than its predecessor, and "Falling Off the Edge of the World" is perhaps the song that better encapsules it, though its ostensibly bombastic nature is a bit too calculated to be fully convincing. As stated above, the level of songwriting is very consistent throughout, with the only true letdown being "E5150", yet another one of those pointless instrumental cuts that only the most hardcore Sabbath fans will somehow enjoy. That all said, "Mob Rules" is an album tailored for Sabbath fans, for good and bad: all those who love heavy metal will find at least a few reasons to rejoice, but you can't deny the fact they are mostly preaching to the choir.

Have you been involved with any of the bands mentioned here? Have any extra info and/or corrections? Please e-mail me at drequon@gmail.com and let me know!
Postado por Drequon às 18:06