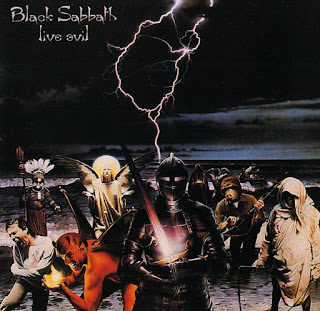 These guys are not very lucky when it comes to live albums, I'm afraid. Black Sabbath's very first of such releases, "Live At Last" was an unashamed cash-in and mostly an act of treason from the band's former manager, Patrick Meehan, who licensed the record without any sanction by the band themselves - and without bothering to pay them a penny for it, of course. And "Live Evil", the 2-LP set conceived to be an answer to Meehan (and also to Ozzy Osbourne's "Speak of the Devil" from the same year) caused such internal friction that Ronnie James Dio decided to pack his bags and the whole band nearly drifted apart as a result! Be careful next time you decide to play a live bootleg from Sabbath at home, 'cause it can't be ruled out that your stereo will explode for no reason and set your whole house on fire, or something. Live recordings can be dangerous, you know.

Things were getting a bit sour within the group even before "Live Evil" to be frank, with Dio and Geezer Butler apparently disagreeing on a number of subjects. But it was during the mixing process of the record that the ego clashes really began, with the other guys accusing Dio of covertly raising the volume of his vocal tracks when they weren't there to stop him (yeah, seriously), while the singer would reproach Geezer and Tony Iommi for choosing terrible pictures of him for the artwork (I kid you not). Such childish disputes went as far as listing Vinny Appice, who left alongside Dio when the band split, as a guest musician (something that was clearly not true) and Dio being credited as "Ronnie Dio" on the liner notes, an epithet the man himself never used throughout his career - and a rather fortuitous connection with "Live At Last", where Ozzy somehow was dubbed "Ossie Osbourne" for no fathomable reason. All very mature, as you can see. Until his unfortunate demise in 2010, Dio would refuse to even listen to "Live Evil", whereas Geezer and Iommi admit without many reservations that the whole affair was close to a disaster.

But is the album that bad, you ask me? Well, not really. Though far from being a classic, "Live Evil" is a pretty decent memento of a very important period in the careers of all musicians involved, not to mention heavy metal itself. But it does have its shortcomings, and a lot of it does indeed have to do with the mixing desk. Though I sure love Geezer's playing, there's no denying his bass is too high on the mix, to an extent that many guitar frequencies got muddied or completely lost in the process. Geoff Nichols' keyboards are credited more as an act of courtesy than anything else, as his contributions are simply nowhere to be found. And the drum solo during "War Pigs" highlights just how uncaring the mixing was with Vinny Appice, as his tom-toms sound like a collection of frying pans and the cymbals are so distant that they seem to have been played in Chicago, while the rest of the band were performing in Dallas. And the audience perhaps were attending a show in Seattle, as you can hardly listen to them around here: even during song breaks or when Dio asks them to sing along, the crowd sounds more like radio static rather than a bunch of people having a good time.

I really love Dio for all the excellent music he gifted us throughout the years, and there's no doubt he was more than capable to stand where Ozzy once stood without leaving anything to be desired. But his rambling during the songs (with countless ooohs and aaaahs and allrights and no-no-nos and so on) gets quite annoying if you listen to the songs in one sitting, and sometimes are truly detrimental to the overall atmosphere, as they leave little room for the instruments to breathe. Some of his performances on Ozzy originals are also a bit too over-the-top, if you ask me. I don't know if he (perhaps unconsciously) wanted to prove he is a more technically gifted singer than Ozzy or something, but songs like "Black Sabbath" and most of all "War Pigs" are almost unbearable in places, with the singer screaming his lungs out and overinterpretating these tunes to a great extent. I'm sure he could have done way better by simply singing the songs as expected, you know.

But let's not be too harsh on this album. There is a nice balance between old and new that sure wil make their many fans happy, and some tracks really work to great effect, such as "Neon Knights", "N.I.B.", "Voodoo" and the memorable pairing of "Heaven and Hell" and "Sign of the Southern Cross", one of those moments of sheer organic brilliance that only a good live recording can capture in full glory. If you're not that much into production details and only demand some good music coming loud and clear out of your speakers, "Live Evil" will probably give you a good return for your money. But it's fair to say that a double live album meant to immortalise such an important and successful moment in the band's existence deserved a way more careful approach that it turned out to receive. Whatever the story, Geezer and Iommi were left to pick up the pieces of Black Sabbath once again, as Dio embarked on a very successful solo career, with Appice more than happy to sit at the drumstool to help his friend. Life moves on, as we all know.

Have you been involved with any of the bands mentioned here? Have any extra info and/or corrections? Please e-mail me at drequon@gmail.com and let me know!
Postado por Drequon às 18:54