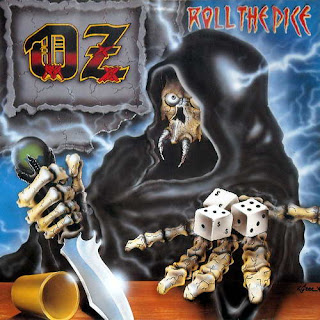 Though not really a huge disaster, "Decibel Storm" was in many aspects the end of the line for Oz, as dwindling album sales were followed by significant line-up changes. The most dramatic departure was of bassist/songwriter Jay C. Blade, who was lured away by an offer to join a promising band based in USA called Princess Pang. Guitarists Speedy Foxx and Spooky Wolff would soon walk out the door too, and who would bet a dime on a tired horse like Oz at this point? Well, it seems that Ape De Martini (now adopting yet another soubriquet, Tapani Anselm) and Mark Ruffneck weren't really willing to accept defeat, and after a long while a stable lineup with Michael Lundholm (G), Fredrik Thörnblom (B) and Jörgen Schelander (K) was secured. The sole surviving product from this collaboration, "Roll the Dice" was a hopeless effort almost from inception, but it does have enough interesting features to deserve a mention, so let's give it at least the courtesy of a proper review.

Not that it is a load of garbage, mind you. The new faces are undeniably competent and the overall musicianship cannot be faulted, so it's not like you're heading for torture when you push the 'play' button. Things start perfectly well with the title track BTW: despite a very dull and unnecessary keyboard intro, the song itself is reasonably strong and presents a charming and catchy chorus. But proceedings get quite monotonous soon after that, with a bunch of songs that does not have much to show and present no truly memorable moments whatsoever. Not to mention the perceivable shift towards accessible waters, a choice that immediately contradicts almost all the good predicates we're used to associate with Oz.

Jay C. Blade may not have been a true genius of innovation, but he sure knew his trade as a songwriter, and "Roll the Dice" suffers from a perceivable lack of creative ideas due to this absence. You soon realize that the riffs are mostly bland and predictable, Tapani Anselm's voice is too soft for its own good (though he sure tried to liven things up with some high-pitched singing in places), the chorus are far from impressive and the keyboards serve no purpose but to tenderize songs that are not that heavy in the first place. Studio production doesn't help matters either, as everything sounds pale and bereft of energy. There's nothing blatantly wrong with tunes like "Lost Generation", "Rock On", "Night Crime" and "Thousand Miles" - but still you won't remember a thing about them after they're gone, as they show no genuine appeal or any signs of real metal substance. Some tunes, such as "Out of Touch" and the aforementioned "Roll the Dice", fare slightly better, but still far from enough to change the feeling of overall dissatisfaction.

After perilously flirting with self-parody, Oz metamorphoses into a decadent form of watered-down heavy metal with no true bite and nothing interesting to say - hardly the most efficient way to resurrect a career, I'm afraid. If few would pay a dime to listen to the former, who would want to have anything to do with the latter? I will give the lads credit for trying their best, but I'm sorry to say they got it all wrong, as I seriously doubt anyone but the most diehard fans of Oz will have this album in high regard. It will therefore cause no surprise to learn that "Roll the Dice" failed to sell in substantial quantities at the time of its release, and soon Oz would realize the writing was on the wall for them. Disbanding was most probably the only choice left after their latest CD flopped into oblivion, and no noise would be heard from Oz for no less than 20 years. A much needed time to regain their metallic strenght, I would add, as their latest activities are more than enough to demonstrate.

Have you been involved with any of the bands mentioned here? Have any extra info and/or corrections? Please e-mail me at drequon@gmail.com and let me know!
Postado por Drequon às 11:36