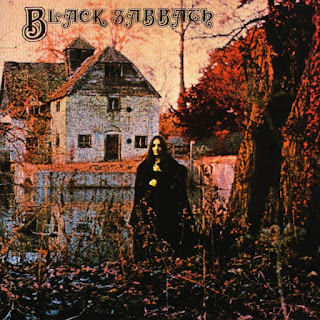 Draw the family tree of heavy metal will never be a straightforward endeavour, you know, but most attempts out there take the quintessential 1970's debut LP from Black Sabbath as a root and pretty much expand from there. I don't want to play the smartass and say it's a completely wrong approach (most of all because, quite obviously, it's not), but I'm afraid "Black Sabbath" (the album, I mean) is not that much the birth of heavy metal as people use to think, not only for heavy metal as a genre, but for Black Sabbath themselves. And PLEASE believe me when I tell you I don't mean it as criticism: it's just that Black Sabbath was not quite there yet in early 1970.

Lester Bangs, who reviewed this album for Rolling Stone back in the day, received a lot of later criticism for calling it "just like Cream, but worse" - and though I'm sure he got it all wrong when it comes to Sabbath's songwriting relevance, his choice for comparision is spot on. At least half the tunes around here are pretty much following Cream's footsteps, employing the same blues rock backbone to create very similar jams with Clapton-ish guitar histrionics - though Tony Iommi, for good (mostly) and bad, is nowhere near the virtuoso Eric Clapton used to be. The results are mostly good enough, but there's no way an inquisitive reviewer can listen to a song like the mammoth "Warning" and honestly treat it as a trailblazer: it's an efficient attempt to emulate Cream (and I love it for what it is), but it's far from being the most original thing released in 1970, if you know what I mean.

Even ultra-classic tunes like "The Wizard" and "Behind the Wall of Sleep" are more like transitional songs than anything else, with some definite metal features (the lyrics, the dialogue between guitars and bass, the slightly intimidating atmosphere) still trying to find a way out of the late-60s blues-rock psychedelia they are sunken in. That all said, it's remarkable how Ozzy, Tony, Bill and Geezer indeed sound like a heavy metal band here, even if the tunes they are playing are not strictly heavy metal - there's no doubt Black Sabbath was the very first act to cause such an impact, and it would be foolish, even childish to underrate them.

And there are two little tunes here that indeed made all the difference for the heavy metal universe, compositions that paved the huge metal avenues that million bands cross even today: "Black Sabbath" and "N.I.B". The title track is surely one of the most bombastic songs ever written by a metal band, still able to scare people over 45 years into the future with a riff that no band will ever be able to match - and "N.I.B" is perhaps the first song to completely transcend the psychedelic and bluesy roots of heavy rock music and become something unique, unmistakably heavy metal through and through. These are the two songs that definitely forged the spirit of heavy metal, and though Black Sabbath would perfect their formula in subsequent releases, the elements to create a huge, fascinating and ever-expanding heavy metal scene were all already there. I will never be able to thank them enough for that.

Have you been involved with any of the bands mentioned here? Have any extra info and/or corrections? Please e-mail me at drequon@gmail.com and let me know!
Postado por Drequon às 15:54