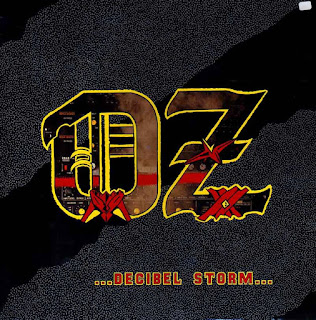 After standing out in the crowd with the brilliant "Fire in the Brain" and cementing their reputation with the mostly interesting "III Warning" (and now under the wing of RCA, a record company more than capable to give the lads a much needed financial backing), it's only natural to assume Oz wouldn't want to rock the boat that much, giving pretty much what their fanbase wanted to hear and not much else. Indeed, if we wish to describe "Decibel Storm" with only a phrase or two, we won't have to go any further than that: Oz playing safe, not-very-complex European 80s metal to make their fans happy. Still, as this LP is widely regarded as the beginning of the end for the Finnish metal merchants, I'm obliged to say that it didn't exactly strike the right chord with the metal scene at the time of its release - and it doesn't sound any better in retrospect either, as it's hardly the most exciting slice of vinyl you will ever hear. Oz done what they were used to do, and still it didn't work out as planned: what went wrong?

Opening song "Eyes of the Stranger" bring some good indications on what's to come. It's reasonably pacey and intense, but does little more than recycling ideas already put to better use in the past (am I the only one or the "Eyes of the stranger, oh woo woo" bit is the exact same formula of "Turn the Cross Upside Down"?). It's like watching a magician pulling the rabbit out of the topper for the umpteenth time: it may still be a good trick, but it simply doesn't work that well anymore. "Starrider" (with one of the most predictable let's-repeat-the-name-of-the-song choruses ever penned) and "Sound of Speed" are as metal-by-the-numbers as they could possibly be, its supposedly intense and fast-paced delivery failing to stand beyond mediocrity. "Black Tattoo" is way worse, a pitifully poor cock-rock bullshit that should never have been committed to vinyl.

But the aforementioned tunes aren't even the real problem, you know. The most detrimental aspect of "Decibel Storm" perpasses the whole album, and it lies in its absolute inability to sound convincing. Maybe "Disaster Dreamer" is the track that best resumes the album's shortcomings: after an immensely dull and unnecessary intro, we have a very average mid-pace heavy rocker with another title-track-turned-into-chorus and without a single hook to grab the listener's attention. And it drags on for nearly 7 minutes! C'mon guys, you used to need no more than 13 minutes to fill the A-side of a kickass LP! One should never move too far away from what one do best, and Oz used to be at its strongest when grabbing you by the neck and saying "bang your head, you bastard". A band like Oz just can't lay off the gas pedal and play safe: it's sounds like cheating, plain and simple. And who would be enthusiastic about a record that never fulfills its promises?

"Teenage Rampage" (originally recorded by The Sweet) is hardly the most typical Oz tune you'll ever hear, but I must admit I have a strange kind of sympathy for it - I don't know, perhaps because it's pretty much the only genuine surprise in stock? "Firestarter" and "Exterminator" are also OK I guess, perhaps in the same league of "III Warning" LP, and "The Show Must Go On" turns out to be quite funny actually, its let's-fake-a-live-show vibe working to good effect and rendering it the most pleasant tune here by far. But it's too little, and a little too late, so no one should be astonished to learn that "Decibel Storm" was the swansong for the most recognizable line-up of the group, their thunder being irremediably stolen by much more forceful and dynamic acts all over Europe and USA. Though not exactly a huge flop, "Decibel Storm" shows a band perceivably running out of steam, and it took a while until they were really ready for another round.

Have you been involved with any of the bands mentioned here? Have any extra info and/or corrections? Please e-mail me at drequon@gmail.com and let me know!
Postado por Drequon às 08:07