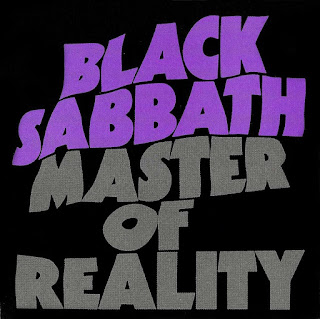 You can only create a musical genre once, you know. Black Sabbath hinted at it with their debut album, gave it shape and a spirit with "Paranoid", and the twisted son they conjured - heavy metal, that is - is still thriving to this day and with a pretty promising future ahead, as we all know. But let's get back to 1971, around half a year after "Paranoid" took the world by storm, when the four geniuses who spawned it were trying to make their minds on what to do next. Consider you just discovered a completely new and unexplored avenue of musical heaviness waiting to someone to hit it: what would you do? See where such road can take you, of course. That's what "Master of Reality" is all about: doing everything that was right about "Paranoid" all over again, but with more riffs, more energy and with a thicker, gloomier atmosphere. And it works, you can bet your ass it does.

It's far from surprising that many tend to think "Master of Reality" is the best album from Black Sabbath, as it is indeed a sort of culmination for the band. Once everyone knew heavy metal was possible, there was a whole different battle going on among heavy rock bands - and Sabbath wanted to make everyone sure, from point one, that the king's crown belonged to them and no one else. The record starts heavy and catchy with "Sweet Leaf", it closes in the eeriest of fashions with "Into the Void", and it never leaves room for a doubt on its way. It takes little more than half an hour to make your ears ring and leave you begging for more. Even more subtle numbers like "Orchid" and "Solitude" are not exactly there to bring relief, as its more unusual nuances only add to the album's ominous, crushing personality. "Solitude" isn't an average ballad, for instance: it sounds hopeless and disenchanted without ever getting too soft for its own good, therefore teaching all the beginners just what kind of sensation a metal ballad should cause. It was the first time anyone would knowingly go to a record store to buy a heavy metal album, so I guess Black Sabbath wanted to make sure anyone would get what they deserved.

It's a slower album than its predecessors, perhaps even the slower album Sabbath ever recorded. Only "Children of the Grave" and some parts of "After Forever" speed things up a little, though never getting close to "Paranoid" (the song) in terms of pace. It's a conscious option, mind you, as the plodding riffage creates a baleful, almost tangible atmosphere of mystery and drama, which I guess is exactly what they had in mind. Something in no small part enhanced by the straight-on approach to instrumentation and singing. As on previous albums, Black Sabbath wisely chooses to use some few tools to perfection rather than wasting energy on learning new tricks - and though some may find the lack of technical prowess quite uncomfortable, raising such a criticism while listening to "Master of Reality" simply makes no sense whatsoever. Who gives a damn if Tony Iommi's playing is simple and unpolished, when he's playing one amazing riff after another? Who the hell cares if Geezer Butler is mostly playing along with the guitar, when it gives the songs a monolithic force almost unheard of? Who will remember to point out that Ozzy Osbourne's singing is blunt and ofter off key, when his voice perfectly and impressively conjures all the nasty things he's singing about?  It was never about virtuosity or being polished, it's about intensity and heaviness, and Black Sabbath was at the top of their game when recording this album. The production works beautifully on that BTW, enhancing the band's cohesive element through and through.

Though lacking the sheer historical impact of "Paranoid" (like pretty much every album released from 1970 onwards, as you can only invent the wheel once), "Master of Reality" is still an essential record for anyone who cares about heavy metal. It's even a final statement in a sense, as the classic Iommi/Butler/Ward/Osbourne line-up would sail increasingly non-metallic waters in future releases, with varying degrees of success. If you want to understand what Black Sabbath was all about, this is surely an LP to listen to, as the sheer impact of their music overbrims every single groove, with no distractions and without ever losing steam.

Have you been involved with any of the bands mentioned here? Have any extra info and/or corrections? Please e-mail me at drequon@gmail.com and let me know!
Postado por Drequon às 18:13