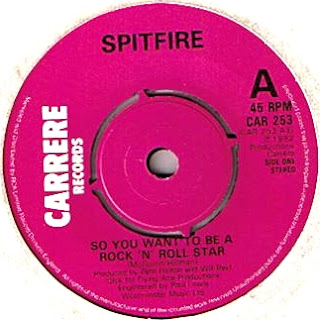 
This sleeveless 7'' from 1982 was a mysterious curiosity for many years. Released by the mighty Carrere label in 1982 without any credits or usable info, this strange single (coupling a cover version for The Byrds' "So You Want to Be a Rock 'n' Roll Star" with the original song "Spitfire Boogie" - although I use the word 'original' guardedly, readers take note) was something that NWOBHM collectors and dealers simply couldn't make their minds about. As time moved on, however, the truth came out: Spitfire was a sort of side-project from Rage (earlier known as Nutz), recorded sometime between their "Nice 'n' Dirty" and "Run For The Night" LPs and released under a different band name. It was a transitional period for Rage, as they were using the recently-enrolled Terry Steers (ex-Thin End of the Wedge) as their sole guitarist, following the departure of Mick Devenport, so maybe it was also a chance to relax a bit and put their act together before Rage return to strenght.

Although the name Spitfire is an overused and hopeless choice, it's perfectly understandable that Rage (and maybe even Carrere) would prefer to use an alternate identity for this release, as it sounds considerably different from their more serious proposition - and, to be very honest, it's not the kind of release you will be proud to call your own. It looks (and sounds) more like an humorous and not-remotely-subtle cash-in, something they probably recorded in a matter of minutes in an attempt to make some money - and perhaps those involved even had some second thoughts about it, as it came out in such a careless presentation. I wouldn't say it was a good move, honestly, as I can hardly imagine it selling more than half a dozen copies in the first instance. Metal fans can be really carried away at times, but they just won't buy any piece of vinyl just because it's supposed to be Metal, you know.

Being an admirer of The Byrds myself, I was really curious to hear what Spitfire done with "So You Want to Be a Rock 'n' Roll Star", the purported A-side - and it's a pretty decent and respectful version IMO, with a reasonable ammount of heaviness and an adequate vocal performance from Dave Lloyd. Sure, there's nothing to be too excited about this rendition (and it's far from being the best song from The Byrds too), but they did a good job out of it, if you ask me. The flipside "Spitfire Boogie", on the other hand, is pretty much hopeless: a uninventive boogie number (yeah, you guessed it) with an extremely predictable song structure and a brain-dead chorus repeating "we're laughing all the way to the bank" until you just can't take no more. A throwaway track if I ever heard one, "Spitfire Boogie" (credited as "Spitfire and the Blackpool Barmies", for no tangible reason) is unlikely to spin in your sound system more than once, but the A-side is prefectly acceptable and maybe you can take some joy out of this 7'' in the end of the day. I would say it may be a good idea to track down a copy if the asking price is cheap enough, but don't spend too much money on it unless your personal utopia is to have EVERYTHING from the NWOBHM era - an impossible task, I know, but that's what utopias are all about, right? 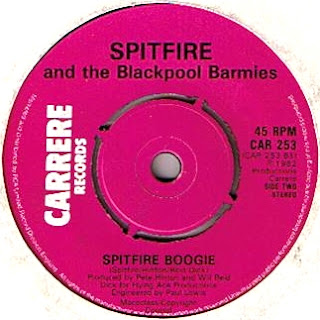 It may not have been exactly an ill-fated venture, as it probably wasn't even that serious in the first place, but the Spitfire exercise didn't make the participants any favours neither. After releasing "Run For the Night" in 1983, Rage fell apart and the musicians involved with this 7'' took their sepparate ways. Tragically, drummer John Mylett died in a car accident just a few weeks after Rage was disbanded, an extremely sad event that made any further reunions totally impossible. Dave Lloyd demoed some material with a number of musicians (namely ex-Diamond Head bassist Mervyn Goldsworthy, ex-720 / Samson guitarist Dave "Bucket" Colwell and drummer Pete Jupp) and enjoyed brief spells with Uli Jon Roth and Diesel before establishing the 2AM project, that released an AOR album called "Every Second Counts" in 1987. Later he also teamed up with Steve Morris (ex-Export and that would later join Gillan) in a band called Sliced Bread, so it's fair to say he kept himself quite busy through the years. Bassist Keith Mulholland also had some projects to call his own, namely Zen Machine and Garth Rockett and the Moonshiners (weird name, that) before having a role in the fortunes of the reunited Demon in the late 90s. Terry Steers took a part in an obscure and unsuccessful act called Tawntaw, but kept himself quite distant from the music scene in later years.

Many thanks to riptorn for the mp3 files! Greatly appreciated, mate ^^

Have you been involved with any of the bands mentioned here? Have any extra info and/or corrections? Please e-mail me at drequon@gmail.com and let me know!
Postado por Drequon às 18:55