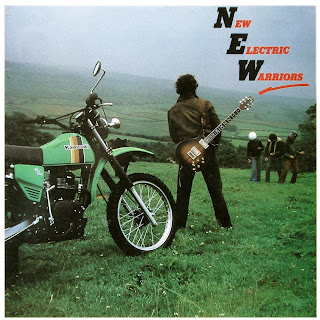 Alright, I know damn too well that most (if not all) of you already own a copy of "New Electric Warriors" LP, or at least downloaded a handful of mp3 files to have a good listen at it. So, I'm perfectly aware that this compilation (released by Logo Records in the later months of 1980) is no secret to almost all potential readers of this humble blog. But I gave it a few listens lately, and I thought it would be fun to drop a few lines about it here - as this place is not only my personal Playlist, but also a good excuse to have fun with some good, old-fashioned headbanging. So please let me have a good time while reviewing this classic album, compiled by journalist Nigel Burnham at the height of the NWOBHM explosion (and please kindly read the rant of the man on the picture sleeve, as it's a very passionate - and slightly over-the-top - extolting of the spirit of those days), one of the truly seminal releases of the entire NWOBHM.

The fun begins with Turbo and their "Running" effort - a song that ephitomizes simplicity in all possible aspects, not only in its name. As previously reviewed on a earlier post, it's an extremely direct tune with marvellously brain-dead lyrics that stick like glue to your mind for days - nothing too ground-breaking or stunningly refined, that's for sure, but quite a lot of fun nonetheless. Buffalo's "Battle Torn Heroes" goes on in similar fashion (the song is pretty much the same riff repeated over and over with a small break for the chorus), but fails to achieve the same results of its predecessor, being a slightly repetitive number in comparision. Next comes Streetfighter with "She's No Angel" - a heavy-rocking tune with many solos and a prominent 70's feeling throughout. Not bad at all, if you ask me - I actually like it more than all songs from their later EP, for instance. Stormtrooper (yet another band to choose one of the most overused monickers of the Heavy Metal universe), on their turn, delivers an unremarkable number called "Grind 'n' Heat" - a very basic tune that can be heard without suffering, but won't set any pulses racing neither, and which is also plagued with a too-raw-for-its-own-good production.

Things improve greatly soon after, though, with a very talented band called Tarot and an awesome headbanging tune called "Feel the Power". It became something of a classic song for NWOBHM fans worldwide, and deservedly so: the riffing is great, the singing is top-notch, the chorus is no less than memorable and the groove of this song will set your neck in motion in a matter of seconds. The fact that they never came to release any other product of their own (and that the band members are quite hard to locate, seemingly vanished off the Earth soon after the LP was out) is extremely unfortunate, as they were surely one of the most deserving acts here featured. Shame on you, record labels of the day! Bastille's "Hard Man" pales quite a lot in comparision, although it's not a bad song at all. Actually, it is a simple heavy rocker with some good (albeit slightly rudimentary) ideas - nothing to be ashamed of, really. Anyway, let's not compare it to Oxym's "Hot Rain", next song in queue, as it would be a bit too rough with them. In fact, Oxym delivers another highlight of this LP, an inventive song which unites quite efficiently heaviness and melody - it reminds me a bit of Witchfinder General, but with a more tuneful chorus and semi-progressive guitar leads. Truly outstanding. If you're listening to the LP version, the A side will be almost over by now, and the immensely capable Dawnwatcher will close proceedings with "Firing on All Eight". Although I consider that they did even better on their two later singles, they surely do a commendable job here, with a Rainbow-influenced number full of nice twists and turns and enhanced by astute keyboard interventions.

The last eight tracks (the B side of the original release) don't make such an accomplished unit as the previous selection, although it sure have its moments. To be honest, though, I must confess I never really understood all the fuss about Vardis, you know. "If I Were King" is not a bad song at all (it's actually a good-enough boogie-metal collision with a very catchy groove in the best Motorhead vein), but it's not that remarkable either - and the fact that it's actually one of finest moments in Vardis' career is to say something about the band's musical inheritance. Silverwing's "Rock and Roll Are Four Letters Words" is nothing to set the world ablaze too, although their proto-sleazy heavy rocking is so immature that it actually turns out to be quite funny and entertaining. The first enthusiastic thumb-up on side B, nevertheless, comes in the form of Rhabstallion and their very capable "Chain Reaction" effort. It's an intense, solid heavy rock with a somewhat 'serious' feeling to it, like they had something good to deliver and were too focused to have fun while playing it. Nothing too polished or too thoughtful, but it works out quite well, and the let's-repeat-the-name-of-the-song-four-times-in-a-row chorus actually do the trick in this particular case. I also enjoy Colossus' "Holding Back Your Love" (a not-that-hard rocking tune with many keyboard layers and soft, tuneful vocals), though I suppose that it's perfectly forgivable if the more die-hard metalheads among you consider it to be a bit too sweet for your tastes.

The next two tracks (Jedediah Strut's "Working Nights" and "Still On the Outside" from Warrior - yes, another one) are so emblematic that I use both to measure the "NWOBHM coefficient" of a given Heavy Metal fan, as it helps me to determine just how much enjoyment he (or she) would take from the really obscure NWOBHM stuff. Let's face it, most of the rare singles and demos that people are crazy to hear are either simple heavy tunes centered around a nice-but-predictable riff (as Jedediah Strut's contribution) or mid-tempo heavy rockers with more than a hint of the 70s and a slightly predictable song structure (as in the Warrior tune here). If you happen to enjoy at least one of these songs, then your NWOBHM coefficient is high enough to justify some digging into the underground; if both songs fail to cause any impression on you, then I guess you can live a pleasant and healthy life without caring too much with the real obscurities. Personally speaking, I happen to enjoy Warrior's number a bit more, but both are funny listens to me, though I know in my heart that there's nothing too extraordinary going on. Therefore, I guess I'm something of an incurable case when it comes to this wonderful branch of heavy music... 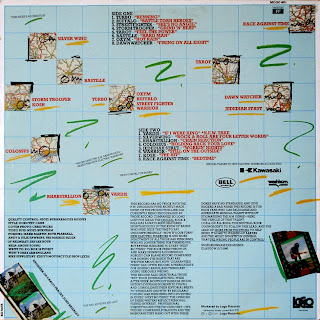 That said, Kosh's "The Hit" will be useless for none but one Heavy Metal measurement: in fact, if you can sincerely look into my eyes and say you love this song from the bottom of your heart, then you surely deserve the Heavy Metal Medal of Honor for die-hard metalheads. It's quite a painful listen, to be honest, with the poor production and out-of-tune vocals only demeaning an already difficult experience. It's all too amateurish for their own good, and I guess Mr. Nigel Burnham commited a mistake here, as they clearly were not ready for a vinyl debut just yet. If they could have done better with a few more years of hard working is something that seemingly will be forever open to debate - but "The Hit" is just a plain bad song and recording, sorry about that. To close proceedings, Race Against Time (centered around the now-legendary Dave Halliday in his pre-Hell days) launches into "Bedtime", a not-very-subtle metaphor on mundane sex which may be slightly tasteless for more delicate palates but which turns out to be one of the heaviest songs here, with a very strong groove well suited for a bit of headbanging. I like it, and even put it among my favorite songs in here, but I can surely accept that some people would be less-than-impressed with it, as it isn't a true ground-breaker in any sense.

"New Electric Warriors" was only a mild success when it comes to taking the bands featured one step further in the business. Only Vardis and Silverwing (later reincarnated as Pet Hate) went as far as to release a few LPs; Buffalo and Rhabstallion would release full CDs but only in much later years, as part of the NWOBHM revival of the mid-to-late 90s. Turbo, Streetfighter, Oxym and Dawnwatcher would get as far as to release one or two single/EPs of their own, but not else (and I must add that, contrary to common belief, Jedediah Strut was never close to release any vinyl product of their own); the remaining acts would have this LP as their sole claim to fame, something which is very unfortunate in some cases. All things considered, though, "New Electric Warriors" is more than a must-have for any serious NWOBHM collector: it's also a good introduction to this fascinating period in British Metal music, and in Heavy Metal as a genre. Don't hesitate too much on buying a copy when you have the chance - and, if you happen to have been a member of any of those bands (the mighty Tarot, for instance) please please please get in touch!


Extra thanks to The Corroseum for picture scans!