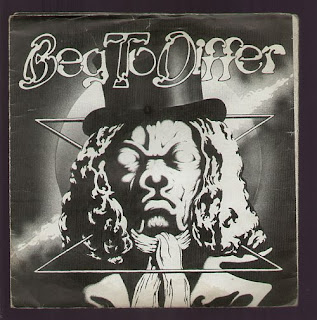 
When it comes to visual contents, Beg to Differ's sole single from 1985 is surely one of the most surprising artefacts of the entire NWOBHM era - although, if we're to be really strict here, a 1985 debut doesn't really qualify as NWOBHM when it comes to release dates. The front cover speaks for itself, and those who own a copy (don't look at me, mate, hope to get there someday!) describe a fold-out sleeve with band pictures, illustrations and lyrics for both songs featured (namely "The Singer and the Artist" and "Moving Away"). It's quite a beautiful package indeed, although Beg to Differ seem to have been a somewhat fleeting project, being extremely difficult to find any references to live outings or any further activities from them. I reckon they bet all their chips into this lovingly-presented single, hoping that it would attract some media and label attention and planning to build up from there - something that, as we all know by now, just never happened. And it's unfortunate, as this two-tracker contents show in a pretty effective manner.

"The Singer and the Artist" lives up to the promise of the record's presentation, being a very adventurous and inventine number full of subtle arrangements and tempo changes. The vocals are not that adequate though, the high-demanding vocal lines being apparently too much for the limited skills of Ray Berry. Don't get me wrong, it's far from any disaster scenario, but it's just too clear that he is stretching his singing at near breaking point in this particular track. He survives relatively unscathed, though, and the interesting sollutions on songwriting and high level of musicianship overall more than qualifies the tune to a very high position in the NWOBHM ranking. Flipside "Moving Away" is a far more down-to-earth, hard-rocking tune with the usual let's-repeat-the-name-of-the-track-over-and-over chorus. Nevertheless, it's an enjoyable number too, with a guitar-only intro enhanced by semi-martial drumming before launching into an upbeat rocker that can really set some necks in motion, if you ask me. All in all, a remarkably capable release for such a fly-by-night group, and one that most Heavy Metal fans are very likely to enjoy quite a lot.

Unfortunately, most of the musicians involved with this promising release seem to have made no further appearances in the metal scene - which is a bit of a shame, as their collective talents are more than evident here. The only musician who seem to have kept a somewhat high profile in the Metal scene was guitarist Colin Riggs, curiously as a bass player rather than the guitarist he originally was. He joined Tokyo Blade's offshot Mr. Ice in the late 80s before being recruited for Tokyo Blade itself and taking a part in the recording sessions for the "Burning Down Paradise" and "Pumphouse" CDs. Mr. Riggs would also be enrolled by Paul Dianno's Battlezone, recording the respectable "Feel My Pain" CD and touring extensively throughout the world. It was a very enriching experience, I'm sure, although it seems that Colin Riggs chose to pursuit different challenges from the early 2000's onwards, as he did not surface on any other music groups of note. Any extra info on Beg to Differ would be very appreciated!

UPDATE (August 9th, 2015): I just learned that Ray Berry, who performed vocal duties for Beg to Differ, unfortunately passed away on July 2014. I'm sure he was deeply loved by all those who knew him, and I'm grateful for all the music. May God rest his soul.

Have you been involved with any of the bands mentioned here? Have any extra info and/or corrections? Please e-mail me at drequon@gmail.com and let me know!
Postado por Drequon às 08:31